When Infiniti launched its range of cars in the UK in 2009 there was something notable for its absence - a diesel engine.

Nissan's luxury wing was offering one powerplant: a fuel-gorging 3.7-litre 235bhp that was hardly going to find favour with the econo-conscious Brits. After a year in the UK market, Infiniti has introduced a 3.0-litre V6 diesel in its EX and FX 4x4 models - a sensible move but then again if you are spending £52k on an FX or even £36k on an EX, you're probably well-heeled enough not to be bothered by a few miles extra from an £80 fill-up.

In any event, it adds more variety to Infiniti's limited engine range. The diesel, in both vehicles, is no slouch. The EX30d will get you from 0.60mph in 7.9 seconds and the FX30d will get to the same benchmark in 8.3 seconds. Although this powerplant will give you a decent shove in the back, driving enjoyment is hampered by a seven-speed automatic gearbox that is woefully slow on pick-up.

Three trims are available. The base EX30d costs £35,975 (£300 less than the petrol version) and gets a substantial amount of kit. Six airbags, front and rear parking sensors, automatic wipers and lights, Bluetooth hands-free kit and climate control are all standard items. On the GT model you get luxuries such as electronically adjustable heated leather seats and tilting door mirrors for a further £1,330, while the top-of-the-range trim - known as GT Premium - costs £41,220 and includes a touch-screen satellite navigation system and some extra 'intelligent' safety systems.

There's a cruise control system with integrated brake assist, which brakes for you in the event you get too close to the car in front. Also included is a new system only available on the diesel car called 'lane departure prevention'. This senses when you move out of your lane on the motorway and warns you. If you don't take any action, the car will apply brakes to the outside wheels to bring the car back into line.

Two basic trim levels are available on the FX. The 'GT' spec has a luxury focus, including heated electric leather seats, glass sunroof and a fancy stereo system; while the 'S' spec has a more sporty theme and gets sporty front seats, 21-inch wheels, active suspension and active rear steering. Both can be upgraded to 'Premium', which means you get almost every option Infiniti offers.

So how efficient is this new diesel engine? On the EX you'll get an average of 33.2mpg compared with the petrol car's 25mpg. It's still not brilliant, but an improvement nonetheless. The FX returns 31.4mpg.

As a result, CO2 emissions are improved too, although not quite enough to make a real difference with regards to tax brackets. The EX emits 224g/km of CO2 and the FX emits 238/g/km, which means both are in band K for VED. Company car tax will still be payable in the highest BIK band.

As a value-buy, the EX fares reasonably well when compared with rivals. The base-model will cost you £665 less than the equivalent 3.0-litre X3. It's faster than the BMW, but less economical and in a higher road tax bracket. Prices for the FX start at £45,150 for the base model and go up to £51,730 for the top-of-the-range diesel-powered which is very close or near to the BMW X6 or Range Rover Sport. 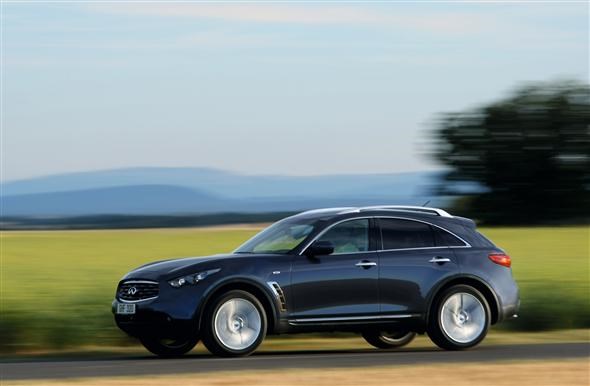 Well made, neat looking and comfortable alternative with the coveted blue and white badge.

Superior off-road ability, chunky styling and a premium feel from the British entry in the class.

Excellent handling, classy interior and lots of room inside.