Put simply, the Mazda MX-5 is the world’s best-selling roadster. It harks back to evocative classic British two-seater sports convertibles, such as the Lotus Elan and MGB, but brings a welcome dose of everyday usability and reliability. Thank goodness.

First launched in the UK back in 1990, the Mazda MX-5 has always made life very difficult to its rivals. To that end, it actually has very few competitors – with three decades of experience, Mazda simply does it the best. Those after a smaller convertible will usually have to step up to a pricier Audi TT or BMW Z4, though it's possible to cross-shop the hard-top MX-5 RF with coupe rivals such as the Toyota GT86 and Subaru BRZ.

It's a simple recipe of good looks, low weight, a great-value price tag and, most importantly, a fun driving experience. The MX-5 has never been a narrowly-focused driving machine, instead making dynamic fun accessible to all.

Which versions of the Mazda MX-5 are available?

As with its predecessor, the Mk4 comes in two bodystyles. First up is the classic, soft-top MX-5 Roadster with a manual fabric roof. Launched in 2015, it was joined two years later by the more unusual MX-5 RF, which features a retractable hard-top with rear buttresses. While the two are fundamentally similar, the different roof designs do lend each version a slightly different character – for example, the RF is the closest thing yet to an MX-5 coupe in the UK.

Both versions are available with a choice of 1.5-litre and 2.0-litre petrol engines, badged by Mazda as Skyactiv-G.

Initially, the less powerful 1.5-litre engine was the pick of the range but, following an overhaul in 2018, the 2.0-litre is now not only far more powerful – 184hp versus 132hp – it also revs just as keenly as its smaller cousin, a combination that serves to make it a very satisfying drive.

There is a good range of trim levels available on either body style, and standard equipment is fair to generous on all variants. Mazda is fond of MX-5 special editions, and so are we, as they often feature unique paint colours and items of kit – the Recaro and 30th Anniversary editions being excellent examples.

Note that there are differences in the suspension between models, with MX-5s that have Sport in their trim title getting a sharper and firmer set-up; 2.0-litre engines also get a limited-slip rear differential to help with traction and control during harder driving, and this isn’t available on the 1.5.

The MX-5 RF, meanwhile, is billed as a bit more of a grand tourer (despite having a smaller boot), and is the only MX-5 available with an automatic gearbox option.

The fourth generation took the MX-5 back to its roots, with an intense focus on making the car as lightweight and compact as possible. 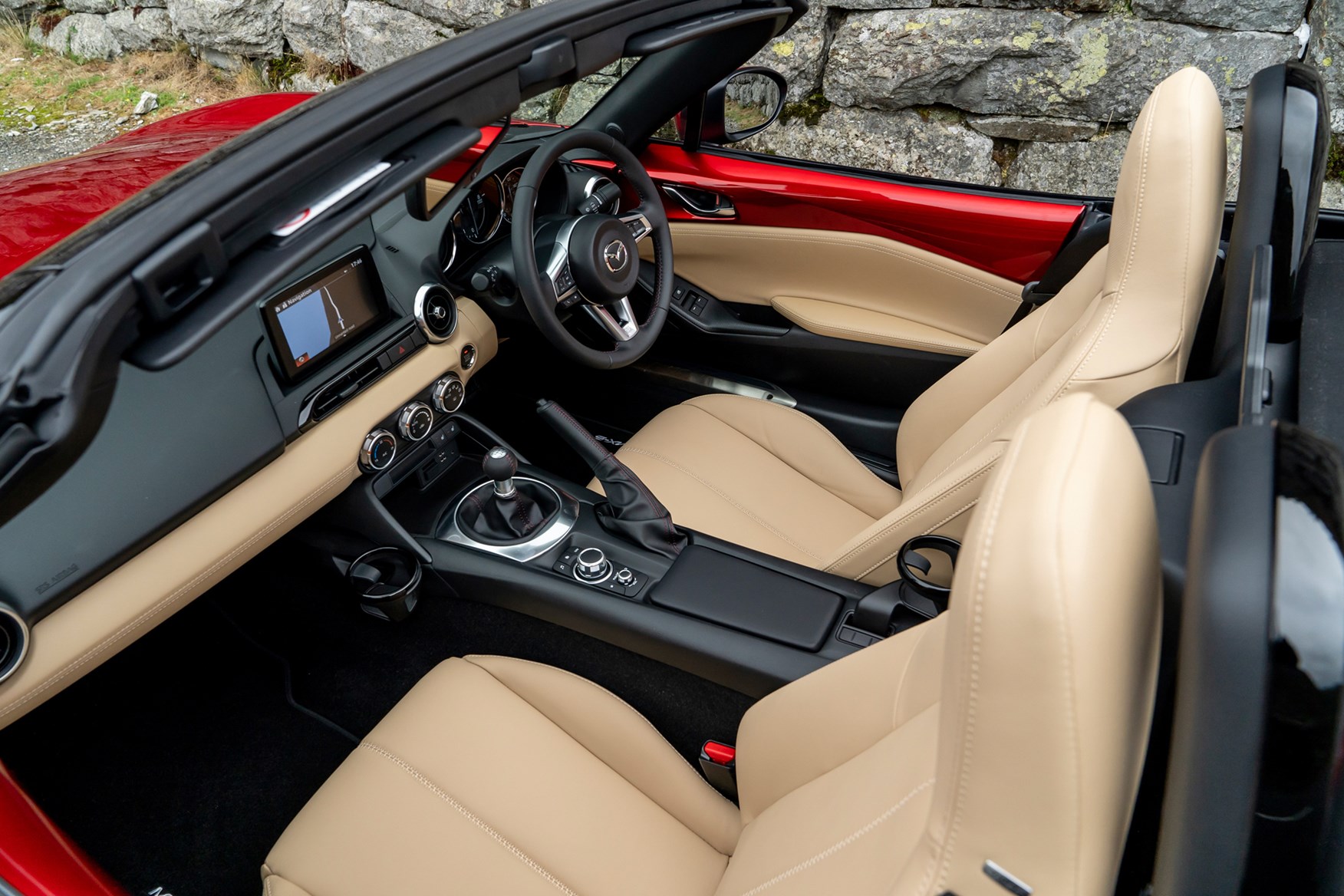 As a result, it’s shorter than even the original Mk1 MX-5 (though also slightly wider) and substantially lighter than the Mk3 model that proceeded it.

This is great news for efficiency as well as handling and performance – but can make the Mk4 feel a little cramped inside for larger adults; tall people may find themselves looking over the windscreen, rather than through it.

Storage space is also limited. There’s no glovebox at all and the boot is tiny.

Cosy accommodation aside, the MX-5’s cabin is well made and attractive, while Mazda’s MZD Connect infotainment system is powerful and easy to use, its simple nature suiting the reduced superfluousness of the rest of the car.

This MX-5 has a particularly purposeful and dramatic appearance – though some diehard MX-5 fans have grumbled it departs too far from previous generations. Ignore them. 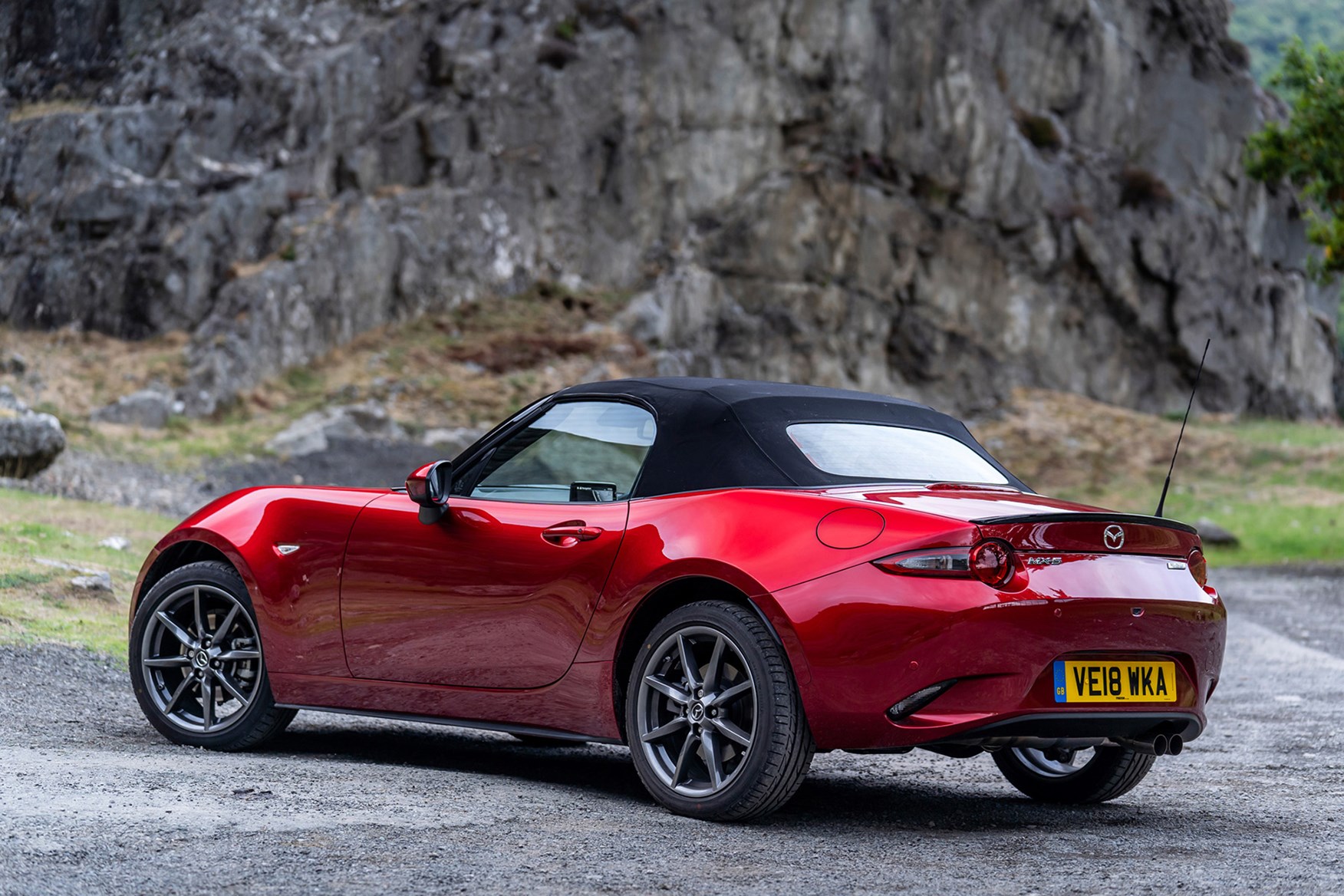 The fabric roof of the soft-top model is exceptionally easy to fold away and put back up, taking literally a couple of seconds.

Meanwhile, the complex automated action of the RF’s retractable hard-top is like engineering elevated to art.

The MX-5’s platform also forms the basis of the Fiat 124 Spider - and the punchier Abarth 124 Spider - modified for Fiat’s own engines and design, although both of these models were discontinued in the UK during 2019.

Being entertaining on the road is the whole point of this rear-wheel drive sports car, and while the Mk4 MX-5 has always delivered, things took a significant step forward when the 184hp 2.0-litre engine arrived.

With the introduction of this model in autumn 2018, the MX-5 finally had an engine that actually made it fast in a straight line as well as the turns. 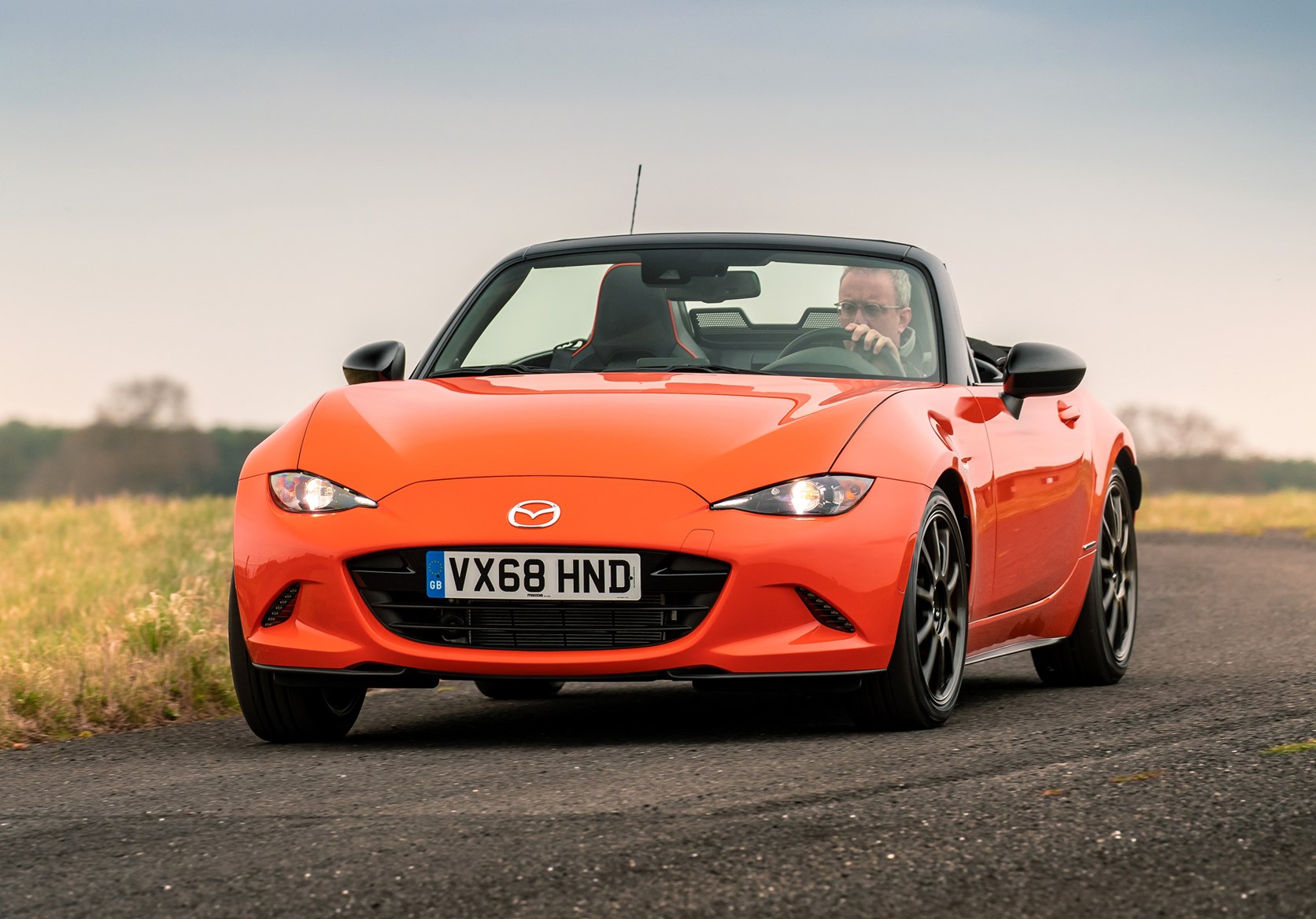 Capable of 0-62mph 6.5 seconds and revving as high as the smaller 1.5-litre engine for the first time, this is an all-round excellent motor – it even returns good fuel economy in the real world.

Handling-wise, the MX-5 is always keen to corner, but you may be surprised by the amount of body roll in the non-Sport suspension versions. This can make it a little unpredictable at the limit – though the electronic stability control system is effective and well-judged.

Sport models, which have as upgraded suspension, are sharper and grippier, and more controlled. But they are also far firmer, making the MX-5 noticeably less comfortable on a longer drive.

How much does the Mazda MX-5 cost?

One of the keys to the MX-5’s tremendous success is that has always been very affordable – and the current car is no different.

List prices and finance costs are highly competitive, and though the similar Fiat 124 is sometimes also worth considering for its finance deals, it’s not as nice to drive as the Mazda.

Want to find out what other buyers think? Read our comprehensive Mazda MX-5 owner’s reviews.

The Mazda MX-5 is, put simply, the world’s best-selling roadster. It harks back to the evocative memory of classic British convertible sports cars, such as the Lotus Elan, but brings a welcome dose of everyday usability.

Launched in 1990, the Mazda MX-5 has always made life very difficult to its rivals. To that end, it actually has very few competitors – with three decades of experience, Mazda simply does it the best. Those after a small convertible will usually have to step up to a pricier Audi TT or BMW Z4, though it's possible to cross-shop the hard-top MX-5 RF with rivals such as the Toyota GT86.

It’s a simple recipe of good looks, low weight, a great-value price tag and, most importantly, a fun driving experience. The MX-5 has never been a narrowly-focused driving machine, instead making dynamic fun accessible to all.

Parkers has thousands of new Mazda MX-5 cars for sale in our new cars for sale listings section – many with great discounts on the recommended retail price (RRP). Find a great deal on Mazda cars for sale, everything from family cars and crossovers to executive saloons and sports cars. Use our filters to find the right new Mazda MX-5 car for your needs and budget. You can search by price, postcode, bodystyle, gearbox, model spec, trim level, fuel type and even colour.
Back to top