The first electric vehicles from mainstream car manufacturers are due to go on sale later this year, but there are a host of questions surrounding the new technology.

They are likely to be expensive to buy and there are concerns over their range and the recharging infrastructure, but the good news is that they are exempt from company car tax for the next five years and also avoid road tax and congestion charges.

We have gathered all the information to let you decide if going electric will be a buzz, or leave you feeling flat.

Why the sudden interest in electric vehicles?

Firstly, the government wants the UK to be a world leader in zero carbon vehicles and because electric vehicles (EVs) do not produce any emissions from the exhaust pipe there is a clearly an agenda it needs to push through. Secondly, car manufacturers have been tasked by Europe with reducing their average CO2 emissions down to 130g/km by 2012 and a host of zero emission models will help drop their average considerably.

So are they really zero emission vehicles then?

Yes and no. The cars are powered by battery packs which supply the electric motors so there are zero emissions from the car. However, the battery packs need recharging, and to do this you have to plug into the national grid, which is supplied by coal-fired power stations. Burning coal produces a lot of emissions.

So I can recharge an electric car by plugging in at home?

Yes, and at the office or via on-street recharging bays. However, the infrastructure is still in its infancy and London, naturally, is leading the way. Other cities such as Brighton and Milton Keynes are also installing on-street recharging units. Certain car companies are also mulling over the idea of having 'quick drop' recharging stations dotted around the country, most probably at selected dealerships.

So once fully charged, how far will I be able to travel in an electric car?

It varies, but 100 miles seems to be the longest distance claimed by any of the car manufacturers. So if you're covering 500 miles a week up and down the motorway EVs are probably not for you. But for inner-city and short-hop drivers, they could be viable.

How much will an EV cost?

Again, it varies. Mitsubishi recently announced that its i-MiEV city car will cost £38,699, or £33,699 once the government's £5,000 discount is taken into account. Nissan has set the price of its Leaf hatchback at £23,990 (again, after the £5,000 grant), while Renault claims that its EVs will cost the same as an equivalent diesel-engined model once that £5,000 subsidy is applied.

£38k? I could but a Porsche for that. Why so expensive?

New technology always carries a premium and the car companies simply aren't going to build enough of these electric vehicles to enjoy economies of scale. And the battery packs are incredibly expensive - between £10,000 and £15,000. Some of the EVs will come with the battery included in the price (such as the Mitsubishi and Nissan), while others will come as a shell and the driver then has to lease the battery pack.

What about having one as a company car?

The good news is that these vehicles are exempt from company car tax for the next five years. Compared with a diesel family hatchback such as a Ford Focus, that will save you around £500 per annum. EVs are also exempt from road tax and the London congestion charge.

The Mitsubishi is on sale now, and Citroen will be next when it launches the C-ZERO (a re-badged version of the Mitsubishi) later this year. In 2011 many more will arrive: Nissan's Leaf hatchback (below) in March and the Renault Kangoo van and Twizy city car in the middle of the year, followed by the Fluence saloon and Zoe hatchback in 2012. Peugeot will launch the iOn (again, a rebadged Mitsibishi/Citroen) at some point in 2011, along with Ford's Transit Connect small van. 2012 will see the arrival of the Focus Electric. 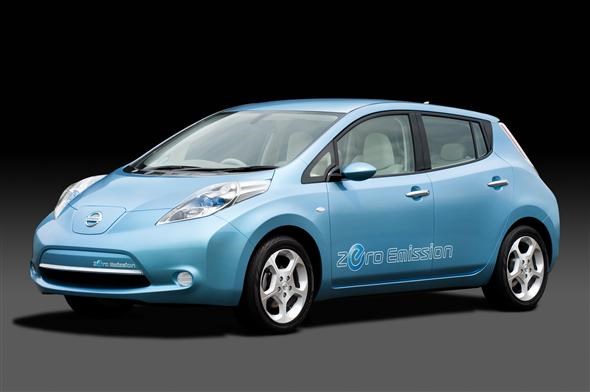