With fleet car registrations accounting for more than 55% of all new car sales, offering a car that appeals to company car drivers is a key task for many manufacturers.

Mazda will look to capitalise on this fleet market by introducing a new range of technologies in 2012 that are branded SKYACTIV. These are aimed at attracting buyers looking for cleaner, more economical cars.

Instead of going with expensive and complicated systems like hybrid technology, Mazda has instead focused on reducing vehicle weight and squeezing the best out of conventional engines.

This all-new range of SKYACTIV technologies will first appear on the CX-5 Crossover in spring 2012 and then on all subsequent Mazda models.

Both petrol and diesel models will be available and buyers can pick between Mazda's new SKYACTIV manual or automatic transmissions that are also lighter and more efficient.

What does this mean for company car drivers? Well, the pick of the range, the SKYACTIV-D 2.2-litre diesel, is quoted to deliver a substantial 173bhp and 420Nm of pulling power. Despite this performance it's claimed to average around 65mpg and offer emissions that are lower than 120g/km of CO2, in conjunction with the other SKYACTIV improvements.

If Mazda matches or exceeds these quoted figures in the new CX-5, and later the Mazda 6, company car drivers could get cars with excellent performance and economy that fall into a BIK band as low as 13% given current company car tax bands.

We tested some of the new SKYACTIV models and found that they're excellent to drive, in particular the 2.2-litre diesel with the six-speed manual gearbox. It feels like a petrol engine, with a crisp throttle response and a strong pull through the rev range. The cars we drove, a future chassis mocked up as a Mazda 6, were notable for a well-controlled ride, slick gearshift and sharp steering. Mazda has definitely retained the engaging character that's found in the MX-5.

Any potential customers that prefer an automatic gearbox will be pleased to hear that the auto models, which feature a unique design that's aimed at delivering a manual-like gearbox action and improved economy, did feel much more positive than a conventional automatic while still being smooth and quick to change gear.

Given the lower purchase price, good levels of standard equipment, capable performance and low running costs, the Mazda SKYACTIV range could cause a serious stir in the company car market if it delivers on its promises. 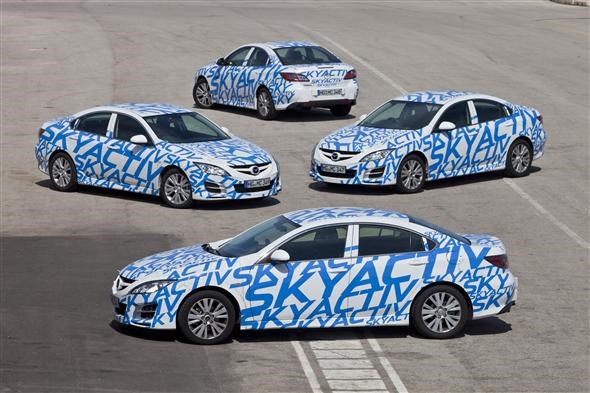