The Transit Sportvan is a vehicle Ford hopes will appeal to the ‘white van man' who is conscious of both his - and his businesses - image.

One of just 100 available, the vehicle we've tested is the most recent in a long line of Sportvans. Each has been available in just one colour; with blue, grey, black and white being the predecessors to the red van you see here. They've also all come with those distinctive racing stripes - it's certainly not inconspicuous.

The Sportvan is effectively a tarted-up panel van - based on the popular 260, short wheelbase, front wheel drive derivative of the Transit.

However, it's not all show and no go. This van uses the firm's acclaimed 2.2-litre diesel engine mated to a six-speed manual gearbox. Power is quoted as 138bhp, with 350Nm of pulling power. That's enough to propel the Sportvan to motorway speeds with consummate ease, even with a full load. When we tested the souped up builders workhorse it hit 60mph in a 12.2 seconds. Pretty good for a vehicle that weighs 1.7 tonnes.

The steering is direct and has plenty of feel, and the turning circle of 10.8 metres means the van is seriously manoeuvrable when driving through town. Although it has a fixed bulkhead the mirrors are large and split so you can easily check your blind spot and reverse parking sensors mean you're unlikely to be backing into any walls.

You get plenty of equipment with this version. As well as those ‘Le Mans-style' bonnet stripes, twin exhaust pipes and 18-inch alloys, the exterior also gets extended wheel arches, front and rear spoilers and sides-skirts.

Slotting yourself into the driver's seat you instantly notice how well-conceived the interior is. As well as the sensible lay-out, there are some very clever touches too. The cubbies are not only large and well-positioned, but several have auxiliary jacks or 12v sockets in too so you can minimise the tangles of wire in the cabin. The materials are tough and hard-wearing, and the controls feel solid and easy to operate.

Standard safety features include ABS, ESP and airbags for both driver and passenger.

The load area in the Transit Sportvan is the same as the standard van. There's 1390mm between the wheel arches, while the total loadspace volume is 6.5 cubic metres.

Unfortunately, Ford reports it has sold the entire current crop of Sportvan. It cost £23,696 excluding VAT - which represents fairly good value when compared to sporty vans from other manufacturers. But don't fret - our sources tell us news of another Sportvan may surface later on this year.

Click here for a short video of the Sportvan as we test its acceleration. 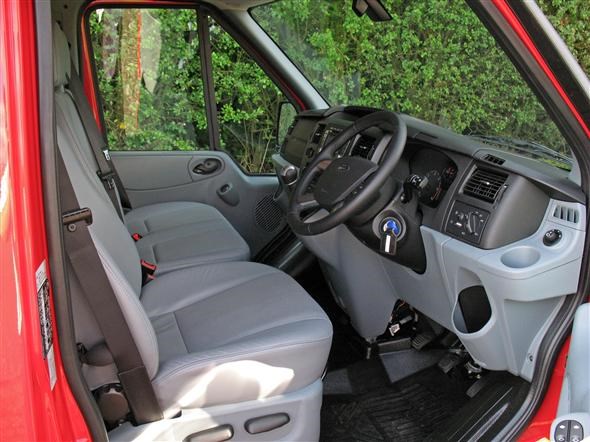 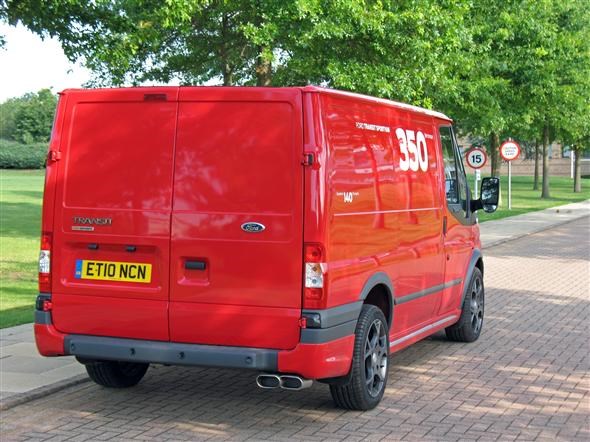