Following on from the A6 hybrid, German manufacturer Audi has revealed details of a hybrid version of its flagship saloon, the A8.

Fitted with a petrol-electric hybrid powertrain, the new A8 is claimed to be capable of returning 44mpg and emissions of 148g/km of CO2.

That means when deliveries start later in 2012 that it'll fall into the 20% company car tax band. If you bought the conventional 3.0-litre diesel version at the same time, you'd end up in the considerably higher 28% band.

It's good news on the economy front, too. Audi state that the new hybrid should be capable of averaging 44mpg, compared to the 42mpg you'd average in the 3.0-litre diesel.

To achieve this, the A8 has been fitted with a 2.0-litre petrol engine supplying 208bhp and 350Nm of pulling power, along with an electric motor that can generate 53bhp and 210Nm.

With the electric motor assisting the petrol engine in short bursts, the hybrid system can deliver 242bhp and 480Nm. That allows the saloon to accelerate from zero to 62mph in 7.7 seconds, and on to a top speed of 146mph. The diesel version, which is more powerful, can achieve 0-62mph in 6.1 seconds and reach an electronically limited 155mph.

The hybrid's electric motor can also be used to propel the A8 up to 62mph on battery power alone - although we suspect you'd have to try very hard to achieve this. All-battery operational range, with a full charge, is quoted to be in the region of two miles at a constant 37mph.

On the outside, little has changed. There are subtle hybrid badges, turbine-styled alloy wheels and an exclusive silver paint finish. Metallic paint is standard along with climate control, LED headlights and a Bose sound system.

Production of the new Audi A8 hybrid will start in 2012, with the first examples expected to go on sale here later in the year.

No official pricing has been announced yet but, with the Audi A8 starting from £56,010, expect the hybrid version to cost in the region of £62,000 if you factor in the price differential between similar conventional and hybrid models. 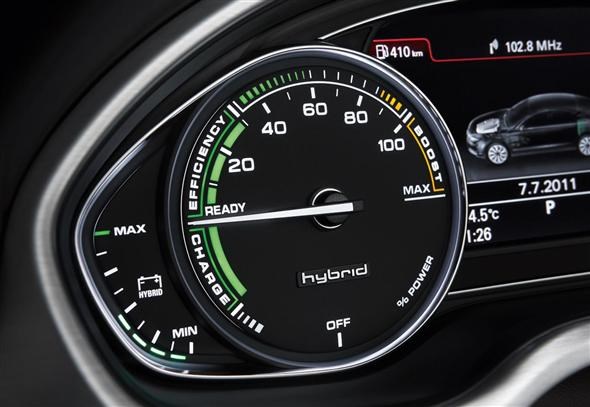 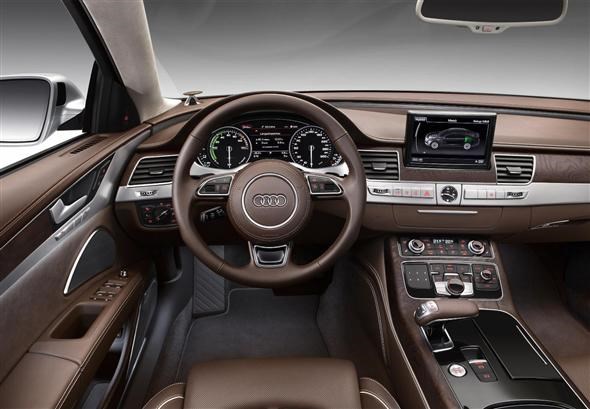