Seat has announced details of a facelifted Exeo that's likely to be rather appealing to company car drivers.

Set to be unveiled to the public at the Frankfurt Motor Show in September, the changes to both saloon and ST - or estate - version of the car are set to make it more appealing to both company car drivers and buyers wanting a more ‘executive' feeling machine.

The Vauxhall Insignia and VW Passat rival was crying out for an update to compete with the likes of the ecoFLEX and BlueMotion models, which are alluring to company car drivers thanks to their low CO2 emissions and high fuel economy. Seat is hoping this facelift will signal the beginning of the firm's fight back against the big players in this sector.

Using a revised version of the firm's 2.0-litre turbodiesel engine, Seat expects the Exeo to emit just 129g/km CO2 while returning 57.6mpg on the combined cycle. That's an improvement of 7g/km and 3.3mpg respectively.

If those figures are to be believed (they're only provisional at this time) then VED will be free in the first year and then cost £115 per year thereafter. Company car drivers will have to pay 19% benefit-in-kind taxation.

In 2012, however, comes the real bonus for company car drivers. There will be an Ecomotive model featuring stop/start technology. The firm hopes this will be enough to dip below the magic 120g/km CO2 figure. That means it's likely to be seriously appealing to company car drivers who'll see their BIK liability plummet to 13% in this tax year, saving significant amounts of cash each month.

The changes aren't all mechanical though. There's been cosmetic work too, with a new face and alloy wheels, as well as bi-xenon lights and LED daytime running lights as standard for Sport models.

Interior materials have been updated too - an effort to boost the car's premium appeal, according to the Spanish firm.

The current Exeo range features three diesel engines and one petrol engine, and costs from £19,285. 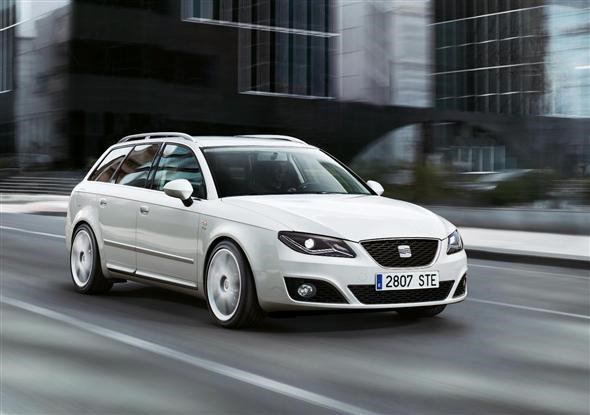