Volvo is developing new technology that will allow its electric plug-in cars to run for more than 600 miles at a time.

At present mass-produced EVs usually only cover 100 miles between plug-ins. Times are changing, however, and Volvo has released details of a range-extender system which will enable EVs to run for over 1,000km (600 miles).

How will Volvo do it?

Effectively, the internal combustion engines on the different systems being developed by Volvo can charge the battery to give an an extended range. This means that owners will still have to fill up with conventional fuel as well as charge up the electric motor through the mains supply.

In practical terms, the car is running on electric power for most of the time.

Derek Crabb, Vice President Powertrain Engineering at the Volvo Car Corporation said: "Battery cost and size mean that all-electric cars still have a relatively limited operating range. With the range extender, the electric car has its effective range increased by a thousand kilometres - yet with carbon dioxide emissions below or way below 50g/km."

The first will be a C30 with a series-connected range extender. This takes the form of an electrically powered C30 with a three-cylinder petrol engine hidden under the floor of the rear luggage compartment. The engine makes just 60bhp, and is coupled to a 40kW generator that in turn powers the car's 82kW electric motor in the front, under the bonnet. The driver can also choose to use the generator to charge the battery, which further increases the car's range. Using this system the car's range will be extended by up to 1,000km on top of the electric power-train's 110km range using the car's battery pack. 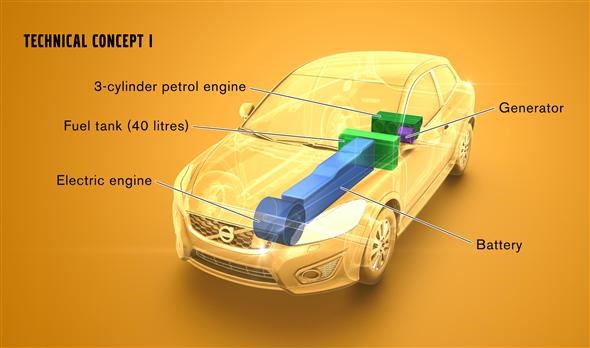 Secondly, a different C30 will be fitted with a parallel-connected range extender. This means a more powerful 190bhp three-cylinder petrol engine is hidden under the boot floor and is used to drive the rear wheels via a six-speed gearbox, working in conjunction with the same electric motor as the first vehicle, producing 83kW. This is similar to the HYbrid4 system that Peugeot uses in that the car can swap between the two propulsion systems as dictated by either the driver or the conditions - or indeed use both at the same time. Again, the range will be extended by 1,000km, but this time you can use a total of 300bhp at any one time. This means a sprint to 62mph in less than six seconds - making it a lot faster than any Volvo you can buy right now. 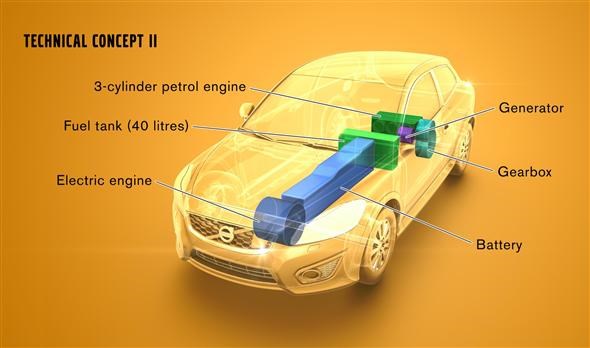 Finally, a V60 will be fitted with another version of the parallel-connected range extender. This time all of the drive-train equipment is installed in the front of the car. The 82kW electric motor is once again connected to a three-cylinder 190bhp petrol engine, this time feeding power through a two-stage automatic gearbox to the front wheels. The engine can also charge the battery pack either when required or when the battery level dips below a pre-determined amount. At speeds of less than 30mph the car runs solely on electricity from the battery pack, which is located under the boot floor. Once again this increases the car's range by more than 1,000km. 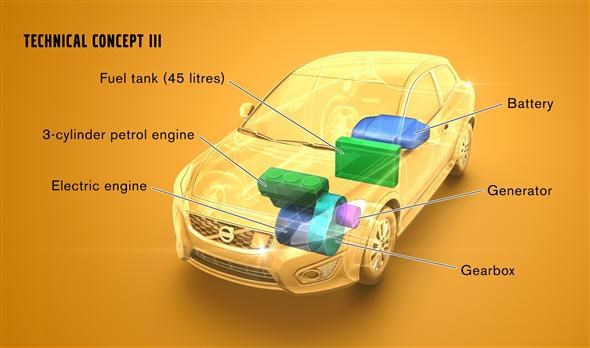