Chich, fashion-first EV is best suited to the city 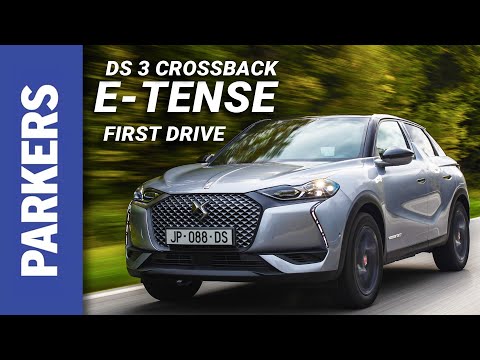 Written by Richard Kilpatrick on 03 August 2021

The E-Tense is essentially an all-electric version of the regular petrol/diesel-powered DS 3 Crossback. That means it’s a small SUV designed to fit into the compact crossover sub-genre of the market, competing against a small selection of battery powered rivals including the Hyundai Kona Electric, Kia e-Niro and MG ZS EV.

To keep things simple, the E-Tense looks almost identical to the petrol or diesel versions, with only the pearl crystal paint finish, satin chrome trim inserts and unique rear bumper standing out – as well as a number of E-Tense logos. It’s a theme continued on the inside, with just the badging and digital dashboard display graphics giving the game away.

Powered by a 100kW electric motor linked to a 50kWh lithium-ion battery, the E-Tense makes the equivalent of 136hp and 260Nm of torque. Such figures don’t sound particularly ground-breaking – nor does the 9.0-second 0-62mph time and 93mph top speed – but the instant power delivery means the E-Tense feels more than fast enough for the vast majority of driving scenarios.

Range is tested to WLTP standards, delivering a maximum of around 200 miles – eight times more than what DS says is the average daily round-trip commute throughout western Europe.Our own tests suggest you will get between 100 to 160 miles, and that the DS 3 Crossback E-Tense is not particularly suited to typical motorway drives despite its comfortable, refined nature.

The E-Tense can be topped up to 80% battery capacity in 30 minutes on the fastest chargers, with a full charge taking around five hours using an 11kW domestic fast charger, or eight hours with a 7kW unit.

Built on the PSA Group’s (Peugeot-Citroen) ‘multi-energy’ CMP platform, the DS 3 Crossback has been designed from the ground up to accommodate both petrol and diesel powertrains, as well as all-electric. This means that, unlike a number of recent electric cars, the E-Tense’s layout and practicality isn’t compromised with issues such as battery placement taking up vital bootspace. Indeed, the E-Tense has the same 350-litre boot capacity as its combustion-powered siblings, as well as identical interior space and ergonomics.

The DS 3 Crossback’s interior is one of its biggest talking points. Bold, striking and available with a broad range of tech, it certainly makes a change from the usual fare – even if it won’t be to everyone’s tastes. Materials used include nappa leather and alcantara, while the overall design feels in-keeping with the silent, luxurious feel of the electric powertrain.

Those who bemoan the lack of physical buttons in modern cars won’t take kindly to the predominantly touchscreen controlled auxiliary functions however, especially as the infotainment software could be more intuitive.

The E-Tense takes its trim levels from the petrol and diesel DS 3 Crossback range, offering all but the base Elegance spec. That means Performance Line is entry-level on the E-Tense, followed by Prestige, Ultra Prestige and finally, top-level La Première. All models feature keyless ignition, climate control, a 7.0-inch digital dashboard display and Apple CarPlay/Android Auto, while optional extras such as a premium Focal Electra sound system and automatic parking are available at extra cost.

Interested in this stylish SUV? Read about its interior, practicality, running costs or driving experience here, or skip straight to the verdict to see what we think of it.