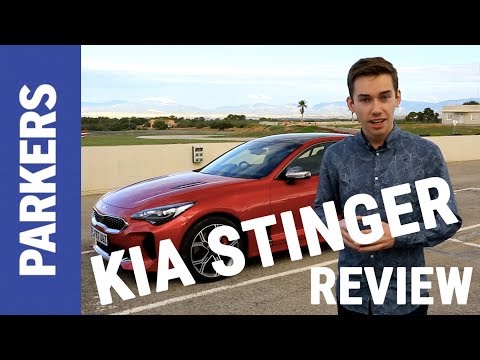 Written by Lawrence Cheung on 02 August 2021

Is the Kia Stinger any good?

No longer the budget brand, Kia has premium aspirations with this flagship model - the Kia Stinger - taking on class-leading premium offerings like the BMW 4 Series Gran Coupe, Audi A5 Sportback and Volkswagen Arteon.

Designed to be an executive grand tourer, the Stinger blends comfort with some impressive performance figures from its relatively large petrol engine. There's a hint of traditional muscle car about it.

Add to that its striking looks and flagship model status, and the Stinger is an intriguing prospect.

Kia has clearly tried hard to impress with the Stinger’s cabin quality, but the overall effect is distinctly hit and miss. On the outset, it looks a great improvement over lesser models in the Kia range but once under closer scrutiny, many of the buttons and materials start to feel distinctly un-premium.

The driving positon is excellent however, and there’s plenty of toys to play with, yet some of the buttons – include the drive-mode selector knob – have been placed in awkward positions.

Kia has made no secret of its ambition to make the Stinger drive and handle as well as its rivals, and – in most respects – it’s succeeded, with its rear-wheel drive layout and standard-fit limited slip-differential.

The result is a car which feels far nimbler than its substantial kerbweight would suggest and one which is genuinely fun-to-drive on a tight, twisting country road. Progress onto wider, faster piece of carriageway and the ride comfort and refinement levels remain impressive – the Stinger holding its own against far more established rivals.

There’s currently no concrete plans for a hybrid or pure electric Stinger, meaning customers have to make do with a single petrol engine. The 365hp 3.3-litre T-GDi V6 feels as fast as the on-paper performance figures suggest, even if the engine noise and eight-speed automatic gearbox could be improved.

Read more about how the Kia Stinger drives

Kia has always been generous with standard equipment levels and, as the Stinger is the flagship model in the range, it’s helpfully gone and thrown just about every piece of kit it can at it.

The engine range used to include a 200hp 2.2-litre CRDi turbodiesel and a 247hp 2.0-litre T-GDi entry-level petrol, but since these were taken off sale in 2020, you'll have to seek a used example for either of them. These were also offered in a lower-spec GT-Line trim level, too, but remained generously equipped.

Continue reading about the Kia Stinger, including its practicality and how much it costs to run.

Volkswagen
Arteon Coupe
4 out of 5 4.0
Advertisement
How much is it to insure?