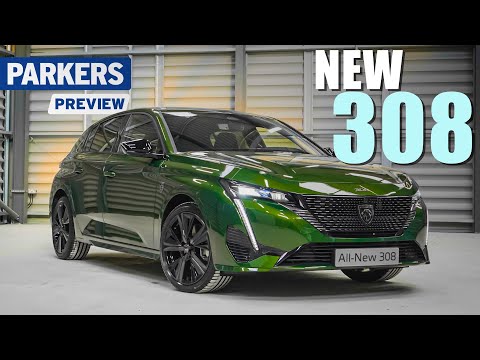 In case you haven't noticed, Peugeot is on the up these days, with a range of interesting-looking family cars distinguished by their plush, high quality interiors. The latest model in the company's expanding line-up is the all-new 308 hatchback that is going for the jugular of the Volkswagen Golf.

It is available as a plug-in hybrid for the first time, and is pushing upmarket to challenge the German opposition, such as the BMW 1 Series and the Mercedes-Benz A-Class. Yes, really. The model's dramatic new styling and proportions – inside and out – distance it from more mainstream hatchbacks, allowing it to sit comfortably among the aforementioned premium hatchbacks.

Set for UK market introduction for the beginning of 2022 as a five-door hatchback and SW estate, it would seem Peugeot has the armoury to make a splash with this one. Read on for a full review of the hybrid and petrol engines to see if it can cut it among this market sector's high achievers.

Peugeot has long benchmarked the Volkswagen Golf on materials and quality, and it shows. The new touchscreen looks slick and acts pretty quickly, and we like the look of the second row of touch-sensitive ‘i-Toggle’ shortcut switches beneath, although you'll need to take your eyes off the road to use them (at least until you're used to them). There’s an Alexa-style voice assistant to change the air-con or radio station, though, which should make things easier.

The cockpit is a comfortable place to spend time. The layered dashtop houses aluminium or fabric sections, accented with welcoming LED lighting from second-tier Allure trim level. GT and GT Premium trims also feature the i-Cockpit digital dashbaord with a 3D effect designed to bring key info to the front, though it’s a bit of a jumble unless on the sparsest setting. The driving position, which places the instruments above the steering wheel, gives the 308 a sporty feel, although shorter drivers might struggle to get an uninterrupted view of the display.

The standard 10.0-inch touchscreen and ‘i-Toggle’ switches, are customisable with your favourite functions that respond with a buzz of haptic feedback. The graphics are nice enough, and a vast improvement over the rest of the Peugeot range, but they're not quite in the same league as the Mercedes-Benz A-Class.

Interior room is acceptable, if not class leading. Even with the driver’s seat dropped down low, a six-footer in the rear could just about slide his big feet underneath, and find an inch gap between knees and seat back. There’s decent headroom too, though the high-set, shallow windows might make some passengers feel a little hemmed in, and some people might find this reasonably low-slung hatchback a struggle to get into compared with a more family-friendly SUV.

Five-door hatches store 412 litres in the boot, though the hybrid’s rear-mounted battery reduces stowage to 361 litres.

The SW estate manages to maintain the hatchback’s style with its sloping shoulder line, chiselled tailgate lip and crisply folded flanks. But it’s plenty practical inside: a low sill enlarges into a practical, rectangular load bay accommodating 608 litres (or 548 for hybrids). You can drop the back seats using the load bay handles, which uncorks 1,634 litres. We'll be publishing a separate review later.

There are basically four engine choices – the 130hp petrol, 130hp diesel and a pair of plug-in hybrids, producing 180 and 225hp.

We start in the Hybrid 180 in Allure Premium spec. This has a 12.4kWh battery good for up to 37 miles of pure electric range, and puts it to good effect over our test route. It's quick enough, and most people won’t need the 225 version of the hybrid: it generates its 29 extra horses (180hp in total) solely from the 1.6-litre petrol, with the e-motor unchanged.

It’s impressively refined, given near-silent electric running and an extra portion of compensatory sound-proofing. When the 150hp four-cylinder petrol engine cuts in, it’s a muted, ghostly murmur in the background and only really makes its presence felt when driving hard. The 308 hybrids cruise quietly on the motorway, with some wind noise around the windscreen the most obtrusive sensation.

Push a rocker button to switch from Hybrid to Electric: it feels neighbourly to waft through 20mph villages in quiet, zero emissions mode, but the Hybrid 180 pulls strongly on steep uphill motorway sections, especially between 50-70mph, without the need for assistance from the petrol motor. For those who don't wander too far from the city, electric-only mode will be all they need.

The 308 Puretech 130 has a different character. The three-cylinder petrol engine is noisy under acceleration, quite in contrast to the smooth hybrid. The EAT8 automatic transmission works fine here, responding sharply to kick down and anticipating your next move well.

Our 130 Puretech SW returned a respectable 39mpg on a mixture of hard-driven mountain roads and motorway cruising – the official fuel consumption is 48-50mpg, depending on spec.

The small steering wheel and quick steering make the 308 agile one the road. The Puretech petrol 130 is the most responsive of the models we've tried, with low levels of bodyroll and impressive body control.

The hybrid is not quite as well resolved. On twisty mountain roads, you do get a sense of its additional weight, with tyres complaining noisily as they work hard to keep their line, with steering becomng a little stickier and some noticeable roll.

Both models ride well (our test cars had 17-inch alloys), with urban potholes causing minimal intrusion and a suppleness over high-frequency motorway bumps. The chunky seats are firm but comfortable.

Plug-in hybrid models perform brilliantly in official WLTP testing. CO2 emissions are low: the 180 emits 24g/km on the combined cycle, compared with 27g/km for the more powerful model. On our 37-mile test route, the Hybrid 180 ran on electric for just over half the journey, and returned 80mpg according to the trip computer.

The hybrid takes 1hr 40min to charge on a 7.4kW wallbox, or 8hr on a plug socket. You can undertake the customary remote charging and cabin warming/cooling via the Peugeot app. Despite the higher purchase price for the hybrid, Peugeot reckons running costs will be comparable with a high-end diesel, depending on hybrid tax breaks.

Only high-power petrol and diesel engines will be offered, and just the eight-speed automatic transmission at launch. Both plug-in hybrid derivatives – badged 180 or 225 – will be offered though.