Anyone chasing practicality rather than pose value or outright performance, ends up shopping either down the 4x4 or people carrier aisle.

Both offer good space, plenty of practicality and the feeling of safety. Decent performance, low-running costs and reliability are all-important too. Given all that is there any advantage in choosing a people carrier over a 4x4 or vice versa?

The Peugeot 5008 is big with its seven seats, it has a huge boot even with the rear most seats down and there's a good level of equipment - including some up market touches such as head-up display, leather steering wheel and a Bluetooth connection for hands-free motoring.

What's more is this top Exclusive trim with a few extras comes in at £27,785, and when you start looking at 4x4s with seven-seat equivalents you start to realise how much car you are getting for the money.

Forgot the likes of Land Rover Discovery and Audi Q7 - which cost a lot lot more - and fix your sight firstly on the Kia Sorento. A new 4x4 launched in the past year that comes with seven seats and the Sorento 2.2 CRDi KDX-3 certainly has the kit to take the fight to the 5008 thanks to rear reversing camera, touch screen sat nav, full leather interior and heated front seats as standard. At just over £33,000 though, it is much more expensive than the 5008 even after adding optional extras including leather upholstery and heated front seats (£1,260).

So what about a people carrier/4x4 hybrid? Roll forward one Mitsubishi Outlander: looks like a people carrier and comes with four-wheel drive. Plus it has seven seats, a 2.0-litre diesel (with a manual gearbox) and in its top trim level (Elegance) again has plenty of kit to match the Peugeot. Running cost stats are similar given the claimed average of 40mpg for both though the manual version of the Peugeot 5008 Exclusive returns a claimed 49mpg.

The Outlander is priced well at £26,904 and matches the Exclusive trim closely, however when it comes to room, the 5008 wins it with a 614-litre boot space compared to 541. What's more the 5008 has a much lower load sill, a wider opening and all of the rear seats can be folded for a fully flat load area - something the Outlander can't manage.

The one 4x4 that does give the 5008 a run for its money is Nissan's Qashqai, though you need to go for the larger Qashqai +2 version as this comes with seven seats.

Price is highly competitive for the Nissan at £26,401 for the 4wd auto version in the top spec Tekna with sat nav, though it isn't quite as well-equipped as the 5008. It's good for space with reasonable room in the two rearmost seats. However, the 5008 does have better running costs - 40mpg versus the 35mpg claimed average of the Nissan's. Road tax costs £260 for the diesel powered Qashqai while £210 buys you a road tax disc for the Peugeot.

Ok, not massive differences and the Qashqai is a worthy opponent, but at the very least it shows just how good value the 5008 is and in the battle of people carriers versus 4x4s, the people carrier plays a strong hand when it comes to value. 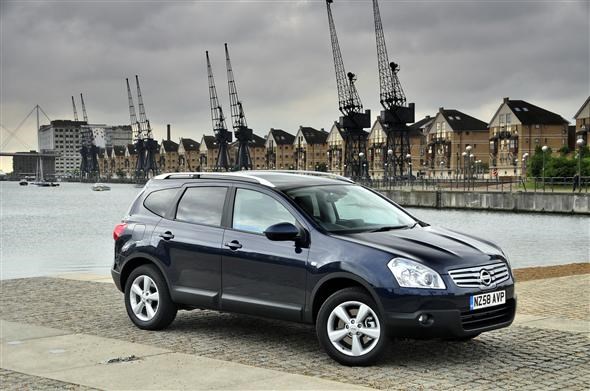