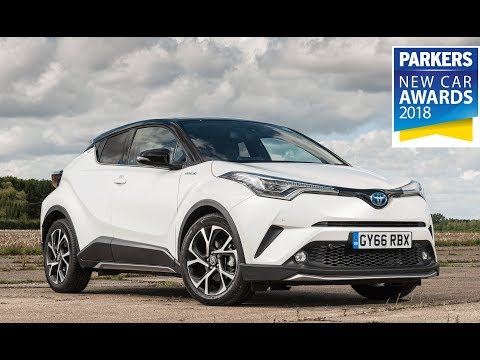 Written by Lawrence Cheung on 06 November 2020

The C-HR is a swoopy coupe-style SUV that looks every inch a fashionable contemporary piece of design, and certainly not like Toyota models of old. Its rivals are quite varied because it’s quite compact inside, but has premium aspirations in terms of look, feel and price.

It’s rather a breath of fresh air in a sea of crossovers that all look and feel very similar (with a few exceptions), but is that enough to make it worthy of recommendation over all of these rivals? Toyota certainly thinks so. That bold exterior is married to an interior with an interesting design and surprising elements, and a lot of engineering has gone into the mechanical parts that make it engaging to drive.

And with two hybrid power options, the C-HR still falls in line with Toyota’s commitment to providing efficient engine options in its cars.

Swoopy is the best way to describe the interior of the C-HR – it’s very distinctive with a lot of different shapes and textures throughout. It’s certainly interesting, and is easier to use than you might expect based on how it looks. It’s also very well made with some pleasant materials used on key areas like the top of the dashboard, the door cards and armrests. It’s all very dark though, so you’ll have to like feeling cocooned if you want a C-HR.

That dark interior does also mean visibility isn’t great – especially over the shoulder with huge rear pillars and dark windows limiting the view out. Thankfully the C-HR comes with a lot of driver aids to help. The good news is that it’s very comfortable, with excellent seats that keep you comfy on long journeys.

Is there much space?

There is and there isn’t. Up front it’s fine – it’s like any other crossover or hatchback in terms of room, but move further back and it’s a slightly different story. There’s actually a decent amount of room for a pair of adults, and the middle seat is comfy. But access is limited because of that swooping roof, and you feel quite hemmed in. It’s not a car for those who easily feel claustrophobic. And while the C-HR’s price sees it rivalling family SUVs like the SEAT Ateca and Peugeot 3008, its boot space is no more impressive than a Volkswagen Polo or SEAT Ibiza.

When it was first launched in 2016, the C-HR came with a choice of a turbo petrol engine and a 1.8-litre hybrid. However, as of late 2019 the facelifted C-HR line-up consists of the same 1.8-litre hybrid and a more powerful 2.0-litre hybrid. Toyota is really pushing these powertrains, and the 1.2 turbo sold in very small numbers in the UK, so it’s been left off the line-up as part of the car’s mid-life update.

While the 1.8 is the bestseller and will suit most drivers’ needs, the extra power of the 2.0 really shines in the C-HR. Its 184hp provides effortless performance, and remains smooth and responsive at all times. If you spend most of your time around town though, there’s no doubt that the less powerful 1.8 will be all that you need.

The C-HR is really rather enjoyable to drive. The C-HR has been engineered in Europe for European tastes, and it impresses with a great blend of body control and accomplished ride. It doesn’t feel fidgety or too harsh, instead riding bumps impressively well without getting overwhelmed. If you are a keener driver, the steering is nicely weighted and it feels agile in the corners. It’s a great balance. The loudness of the type of gearbox it uses will grate on many though.

Economical and cheap to run

What’s even more pleasing is that the C-HR is a cheap car to run, too. Both hybrid units claim more than 50mpg, and we’ve found even the more powerful unit will easily hit those claims without even trying too much. And if you do struggle to hit the claimed figures, there’s a Toyota app that features a hybrid coaching system to get the most out of your car.

Our leasing partner, ZenAuto is offering C-HRs from £279 per month.

Read on to see if the Toyota C-HR is the family SUV for you, and if it's a worthy alternative to the likes of the Nissan Juke, Volkswagen T-Roc, MINI Countryman, DS 3 Crossback and Kia XCeed.