Looking for a cheap, used car on a tight budget? There's plenty on offer in the second-hand car market at this end of the price scale, with plenty of scope to find something inexpensive, practical or fun.

Parkers has selected a range of cars for under £1,000* that you might not have considered, to give you an idea of what you can get for your money. Some offer luxury, some offer serious driver involvement.

It's usually not too difficult to find these cheap cars either, so a bit of searching should soon turn up a few good examples for sale near you.

As with all used purchases, do remember to get a car history check. It might just save you from an unpleasant surprise later down the line. 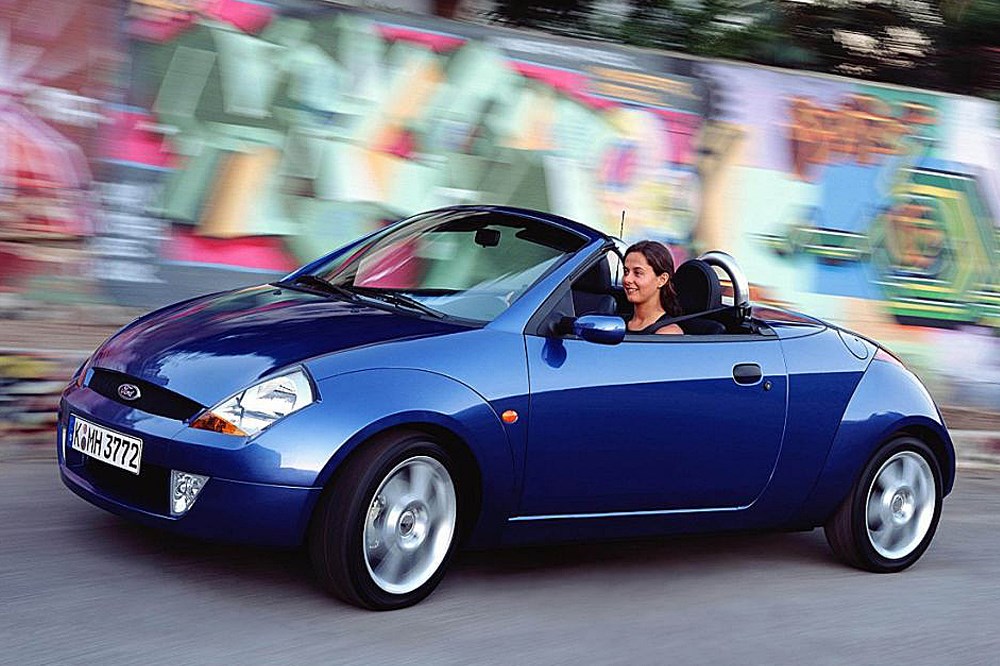 Now that the Mazda MX-5 has become so sought after that even shabby examples are more than £1,000, the little two-seater Ford StreetKa has taken on the mantle of being Britain's cheapest fun roadster. It's not quite as appealing to enthusiasts, but for most drivers who just want something small, cheap to run and with a little bit of open-air fun it is, arguably, an even better choice.

You do need to watch out for rust - though unlike the MX-5, the rust is generally very obvious and around the sills and boot floor, and easy to fix. Other than that the engine is robust, the suspension cheap and easy to maintain, and the interior, hardwearing with a surprisingly large boot. Special editions often come with hardtops and heated front seats.

This first-generation Ford Puma is very different to today's SUV version, with its coupe looks offering a sporty drive without costing much more to run than the Ford Fiesta hatchback of the same era.

You can choose from a few petrol engines, starting with a 1.4 litre and heading up to the 1.7-litre, and it's the latter we'd aim for.

While its 125hp output may not look like much, the Puma is very light (tipping the scales at just above 1,000kg), so you end up with a responsive, high-revving engine combined with an agile chassis that can only put a smile on your face. There is a Ford Racing Puma, but this is extremely rare and very much out of this budget.

Practicality isn't a strong point, with a small boot and rear seats best reserved for children. Plus, at this age, it may take a while to find one that isn't plagued with rust. But, as an easy introduction to sportier looking cars, this is very hard to beat, even today.

Unmistakably MINI, the original Cooper provides genuine excitement, with interior and exterior style that is leagues ahead of anything else of the time. Luggage and rear passenger space is compromised. For a city car, it's remarkably capable in the country with a torquey 1.6 litre engine and exceptional handling.

You may find a rough Cooper S with the 163hp supercharged 1.6 litre, but the standard 115hp Cooper has plenty of power; buy on overall condition, not specification as both are immense fun.

History suggests you can't go wrong with a Ford, and the replacement for the Escort focused on significant improvements in handling and dynamics. There's a huge range of engines available, including a sweet 1.6-litre petrol, but the one we'd aim for now is the ST170. Falling between XR and RS levels of tuning, Cosworth involvement on the engine and a Getrag gearbox hinted at motorsport thinking.

The reality was not quite as competitive or hard-edged as that implies, instead proving extremely competent while losing none of the practicality of the regular Focus. Look out for limp-home modes masquerading as expensive misfires, and if it's particularly clean lock it in a barn for a decade.

Moving into a smaller segment, the IS targeted the BMW 3-series. Compact and rear wheel drive, with six-cylinder petrol engines, the IS exemplifies the Gran Turismo generation. As a used buy it avoids many of the electric and build issues that affect contemporary BMWs.

Interior styling is far from dull, despite the restrained exterior. This is the car that launched a thousand aftermarket taillights; it has merits beyond such gaudy trinkets, particularly the 24 valve VVTi engine.

Vastly improved over the 900 Convertible, the 9-3 can be found in both 1998 facelift and 2002 redesign at this price point. It's worth seeking out the later model for improved interior quality and equipment. 2.8 V6 Aero models offer up to 276hp and 7 second 0-62mph.

Both models offer decent space for four adults with excellent seats, good refinement with the roof up thanks to the glass rear window and multi-layer top, and passable luggage space. The 1.8t Vector has respectable performance, but the Aero is the one to find if you want real excitement.

Cheeky looks, with space for four

This Fiat Panda continues the tradition of being a low-cost and compact way to get through towns and cities. The small footprint and nine metre turning circle is great for tight roads and parking spaces, but that upright body means there's also space for four.

The boot might not be able to fit everyone's luggage (just pack carefully), and the interior is pretty basic, but higher-spec Eleganza or special edition models will be in budget, so you at least get alloys wheels, electric front windows and air-conditioning.

Engine power looks modest nowadays, but the Panda is light and provides all you need in stop-start traffic. The diesel might be the most powerful and frugal, but to achieve meaningful fuel economy figures, you'd have to commit to longer journeys that are out of the Panda's depth.

While everything else has become tech-laden nowadays, the Panda is refreshingly simple. Rural drivers will find it fun to drive, too, thanks to its slick gearbox and suspension firm enough to be entertaining while you weave through traffic with ease.

A modern classic with rally credibility

Realistically, for minimum cost the 2000-on Subaru Impreza in 2.0 naturally aspirated form is the best bet. You can enjoy a sub-10 second 0-62mph and secure all wheel drive handling with some of the looks of the competitive rally cars.

If you want the real thing, the WRX does sometimes venture into the £1,000 area. Expect something modified and needing a bit of work for that price, but worth the investment for the cross-country ability.

The Honda Legend never really lived up to its name, which seems a shame given how competent this large saloon is. There's plenty of space, equipment and luxury on offer, although it may take a while to find one, given the relative lack of sales compared to its competitors.

We've gone for the 3.5-litre V6 version and while fuel consumption and road tax will be quite high, the huge level of depreciation means you still get a lot of car for the money in the first place. Owners tend to love them without reporting any major reliability issues, either.

The Toyota Celica was completely redesigned for 1999, gaining a sharp fastback shape that still looks modern today, and sharing mechanical components with the outstandingly reliable Avensis. Power is relatively modest, with a choice of 140hp or 190hp VVT-i engines, but there's a six-speed gearbox to make the most of it.

Handling is competent, rather than truly engaging, but with this much style and practicality there has to be a compromise somewhere. Prices for good cars are consistently low, too, with affordable servicing and maintenance - when required.

We'd recommend the 190hp model, and it's worth remembering that unlike the dull diesels that swamped the market after the Celica, this is a peaky petrol that needs to be revved to get the best out of it.

* Prices based on examples found on Parkers Cars for Sale and limited to availability. Similar examples may be on offer.

Don't forget you can use our valuation tool to get an idea of how much you should be paying for a car. You can also check our reviews section for more information about the cars you are interested in.

>> Have a little more budget to play with? Here's a range of economical used cars for under £2,000