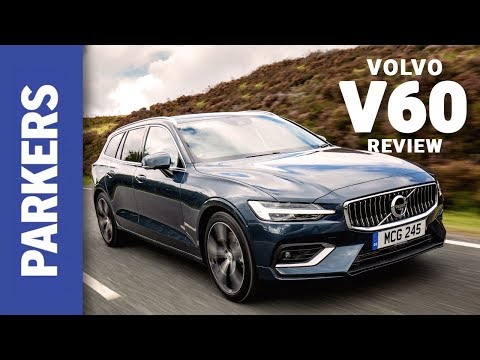 The V60 is a medium-sized estate car that promises to combine all the practicality and convenience you’d expect from a Volvo estate, with a healthy dose of style, technology and advanced safety features. Taking design cues from the larger V90 estate and XC60, the V60 strides into battle with a formidable range of rivals, including the Audi A4 Avant, BMW 3 Series Touring and Mercedes-Benz C-Class Estate.

A tough ask taking down the ‘big three’ from Germany, but the V60 delivers excellent value PCP finance and personal leasing costs that – like for like – manage to substantially undercut the competition. Take price out of the equation, however, and can the Volvo V60 compete? Read on to find out.

What engines are there?

The V60 is based on the same technology as the XC60 and the Volvo XC90 and S90/V90 family of cars, with the choice of diesel, mild-hybrid petrol and plug-in hybrid. The UK currently gets a 190hp D4 diesel with front-wheel drive and a choice of manual or automatic for each. Petrol powered models are available in 250hp B5, 197hp B4 and the 163hp B3 forms. The old Twin Engine models are now known as the V60 Recharge and packs no less than 340hp. Want more? Then go for the the 400hp Polestar Engineered model.

Volvo estates are traditionally famed for their boxy load areas, and despite its sporty lines, the V60 is no different, with a German-beating 529-litre boot (with the rear seats in place, loading up to the window line). Drop the seats, however, and the 1,441-litre total lags behind Audi, BMW and Mercedes rivals, while the Mazda 6 Tourer and Skoda Superb Estate are larger still.

It’s no surprise that with the Volvo V60 being based on the same platform as the XC60, that the engineering and tech will be largely similar. The dashboard and Volvo’s Sensus infotainment system are carried over, almost unchanged – which is no bad thing. As with the Volvo XC60, the V60 will be fully compatible with Apple CarPlay, Android Auto and incorporates a 4G hotspot and connectivity.

Extensive voice controls are also available – a far less distracting option than having to prod the screen to change all settings. The portrait-format screen controls many of the V60’s primary functions, including navigation, connected services and entertainment apps, with no physical controls for the climate system.

The V60 carries over its sister-cars’ safety technology. So you get the advanced driver support systems that makes driving these cars a partially-autonomous experience on the motorway. The City Safety with Autobrake technology uses automatic braking and detection systems to help avoid accidents. Volvo says it’s the only system on the market to recognise pedestrians, cyclists and large animals. In addition, City Safety has now been fitted with autobraking to mitigate head-on collisions.

The Pilot Assist system (Volvo’s adaptive cruise control system) assists with steering, acceleration and braking up to 81mph. Volvo says it has improved cornering performance. The V60 also comes with Run-off Road Mitigation, Oncoming Lane Mitigation and other steering assistance systems. Cross Traffic Alert with autobrake will be optional. Given Volvo’s long-standing safety record, it was no surprise that the V60 was awarded a five-star rating when it was crash-tested by Euro NCAP in 2018.

In addition to all of this, the V60’s top speed is limited to 112mph as a part of Volvo’s bid to reduce having a driver seriously injured or killed in one of its vehicles. This also applies to its other models on sale.

Extensive equipment on offer across the range

All models include the 9.0-inch touchscreen media system with sat-nav, LED headlights, a power-operated tailgate, dual-zone climate control and a 10-speaker sound system. Inscription models, meanwhile, will come with leather seats, with electric adjustment for the front seats, with front parking sensors and 18-inch alloy wheels.

Sporty R-Design and off-road Cross Country versions are also available. All models (aside from Cross Country) can be specced in Pro form, which adds a head-up display, keyless entry, hands-free tailgate opening and closing, headlights that turn with the wheel, plus a heated steering wheel.

Volvo will also offer its premium subscription service, called Care by Volvo. With this, you’ll be able to access cars via a monthly flat-fee subscription rather than owning it in the traditional sense of the word. Volvo says it makes having a car as easy as subscribing to your mobile phone service. With so many things thrown in – including servicing, roadside assistance and insurance if desired – monthly payments are reasonable, starting at around £450 for the D3 Momentum manual.

Bear in mind, though, that no large initial deposit is needed and that includes a higher-than-average 15,000-mile-per-year limit – aspects that would inflate the monthly payments of other finance options.

Directly replacing its predecessor of the same name, in order to succeed the V60 needs to be distinctive and appealing in its own right – not just from the predominantly Germanic competition in this sector of the market, but also from its larger sibling, the V90. See the two Volvos together in a showroom and their subtle differences will be all-too apparent. The V60’s more compact, has sharper and more aggressive detailing, but thankfully doesn’t feel significantly smaller inside.

Those traits are mirrored in the way the two Volvos feel to drive, with the V60 being the more lithe and (slightly) sportier of the two. You’re conscious that because it’s not quite as large, it’s noticeably wieldier. It doesn’t try to rival the overtly sporty handling favoured by its rivals from BMW or Mercedes-Benz either. This is a good thing.

Click through the next few pages to read everything you need to know about the Volvo V60 including its practicality, how much it costs to run, what it’s like to drive – and whether we recommend buying one.