Four-door coupe version of the 1 Series, available with front- or all-wheel drive 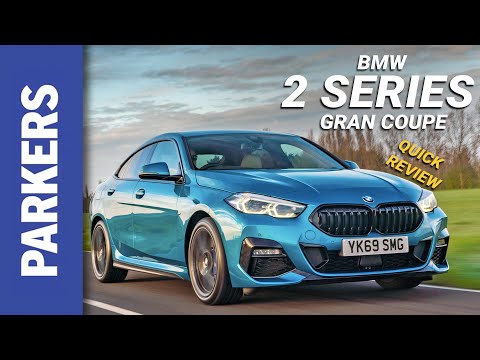 The 2 Series Gran Coupe is a fastback saloon version of the 1 Series hatchback, which BMW is calling a four-door coupe. Apart from the slinkier bodywork and conventional boot in place of a tailgate, it’s the same car underneath. The company has been making Gran Coupe models since the introduction of the 6 Series version in 2012.

>> BMW announces new engines, hybrid technology and other upgrades for 2020

It's an interesting formula. The Gran Coupe models combine the slinky style of a two-door coupe but with the added practicality of four doors. Over the years there have also been 4 and 8 Series Gran Coupe models, and now the same approach is being applied to the 2 Series for the first time, making it the smallest BMW Gran Coupe model yet (although still with a sizeable grille).

The aim here is to attract younger customers with its sleeker roofline and slightly jazzed-up interior, with illuminated trim pieces in place of the conventional wood and aluminium-look, but is it going to work? Natural rivals include the Mercedes-Benz CLA and A-Class Saloon, and the 2020 Audi A3 Saloon from its premium rivals and the Peugeot 508 fastback from the volume end of the market.

From launch you have a choice of the following engines:

Since it’s built on the same underpinnings as the latest 1 Series, the 2 Series Gran Coupe is front-wheel drive rather than rear-wheel drive like 2 Series of old. However, the top M235i is equipped with all-wheel drive to best deploy its considerable power and torque – hence its xDrive suffix.

Will it being primarily a front-wheel drive car affect its desirability in the minds of potential BMW drivers who revel in the 'ultimate driving machine' ethos from days gone by? We'll see.

Compared with the 1 Series hatch, the 2 Series Gran Coupe is 15mm lower and 210mm longer on the outside. The interior is all but identical for front occupants, but those in the rear seats will find the biggest difference.

There’s plenty of kneeroom, although the sloping, coupe-style roof means headroom is a little tight for passengers approaching six feet or taller. They may find they need to angle their head forward a little to avoid the top and back of their hair skimming the roofline.

A test drive is recommended – some buyers may find the M Sport suspension a little too firm for their tastes.

BMW expects 218i M Sport versions to be the biggest sellers. But is it worth a look? Read on to find out more.