Volkswagen is planning to introduce hybrid versions of its most popular models as early as 2012. The news follows the launch of the manufacturer's first hybrid engine in the new Touareg, which goes on sale this summer.

The first hybrid model is likely to be the new Jetta, which will be based on the Compact Coupe concept, pictured above. It may not be as popular as the Golf here, but it's the biggest selling Volkswagen in the US.

The Golf hybrid will follow in 2013 along with hybrid versions of the Passat saloon, Passat estate and Passat CC. But what's not clear is whether these will be petrol or diesel hybrids.

Until now, the only hybrids on sale have used petrol engines and the new Jetta is expected to use a 1.4 TSI engine along with a 25bhp electric motor. This gives potential emissions of 98g/km of CO2 and economy of 45mpg. It still has decent performance with a 0-62mph time of 8.1 seconds.

Volkswagen is also currently trialling a Golf diesel hybrid in Berlin. Called Twin Drive, it uses the firm's existing 1.6 TDI engine and three electric motors. Like most hybrids it uses electric power up to 30mph. The big news is that Volkswagen claims it can return a mighty 113mpg.

The German manufacturer will also be launching a range of purely electric vehicles, including the E-Up (pictured below) set to hit showrooms in 2013. Golf E and Jetta E models will follow in 2014. 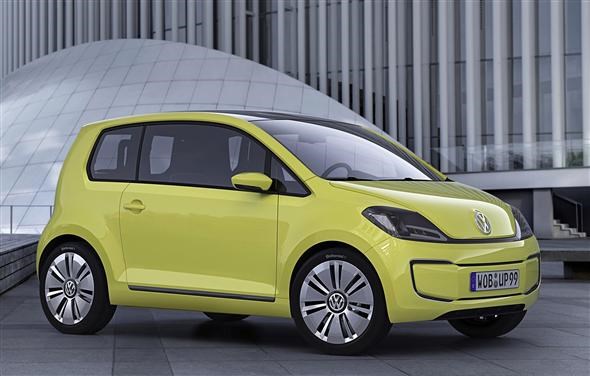