Hybrid cars are getting very popular with luxury brands. Lexus and Infiniti have led the charge and now the latest competitor, Audi, has unveiled the A6 Hybrid.

From afar you would not be able to tell the difference between the Hybrid and the regular A6, as the exterior changes are limited to subtle badges and low-drag wheels. The new A6 - which shares its styling with the A4 and A8 - has been well received by customers, so Audi has been wise to leave it externally unchanged.

Under the bonnet the A6 Hybrid combines a 2.0-litre TFSI engine with an electric motor and a 1.3-kilowatt hour lithium-ion battery pack. The batteries are housed under the floor to retain both good driving dynamics and Audi's excellent safety standards. The Hybrid can muster a peak power of 241bhp, which is enough to propel the car from 0-62mph in 7.3s. It has a top speed of 148mph.

When you switch the car on, you can run on electric power alone for up to two miles at a speed of 40mph. That's quite impressive, assuming you can achieve it in reality, and ideal for those commuting in traffic or inner cities.

When taking off from a standstill the whir of the electric motor is the only thing that breaks the serenity of the well-insulated cabin. Like all petrol-electric hybrid cars, the Audi A6 is quick off the mark. Combine this with an eight-speed Tiptronic gearbox and it makes for a very relaxing drive.

During testing the car performed well over undulating surfaces. It's still much more suited to munching motorway miles but it can hold its own on B roads too. There is little road noise from the tyres but the only real intrusion is from the wind - although this is largely down to the large wing mirrors.

The Hybrid is also 195kg heavier than the six-speed manual 2.0-litre diesel, obviously not helping either emissions or fuel economy.

If your time is spent traversing the motorway network then the diesel is the only choice. If you're an urbanite, however, the petrol/electric Hybrid may be worth a look when it's launched in 2012. 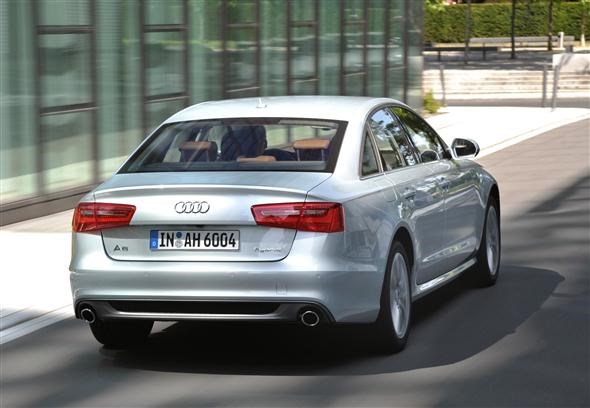 Mercedes-Benz E-Class Saloon
The E-Class is a mainstay of the Mercedes-Benz range, demonstrating exactly what the company can achieve with a saloon.

Lexus GS
For those who prefer something different, the Lexus is a well-equipped and refined alternative with great levels of standard equipment.

BMW 5-Series Saloon
The most complete executive saloon on the market which manages to blend superb handling with limousine-like comfort, as well as unsurpassed cabin refinement.