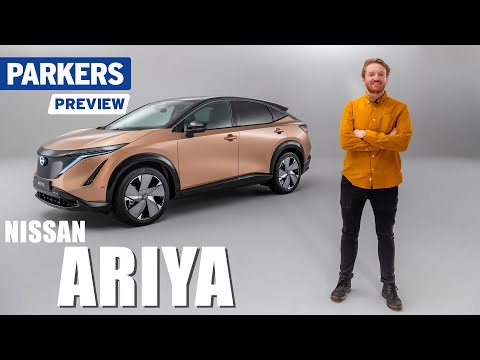 The Ariya is Nissan’s new big thing. According to the Japanese firm it combines what Nissan does best (electric and crossovers) into one convenient package. It comes with two or all-wheel drive, up to 310-miles of battery range and two levels of power.

Importantly for some, it ushers in a new design ethos and it looks different from other Nissan models you can buy. In the metal it’s futuristic and very solid, while the interior is particularly spacious.

If you’re struggling to put a finger on how large it is, it sits in between the Qashqai and X-Trail in Nissan’s range. This means it has loads of rivals. Main rivals include our Car of The Year, the Skoda Enyaq iV, as well as already established electric cars like the Kia e-Niro and Jaguar I-Pace, and also upstarts like the Ford Mustang Mach-E, BMW iX3 and VW ID.4.

The Ariya is certainly more stylish than Nissan’s other electric car, the Leaf. There are ultra-slim LED headlights upfront, with a contrasting light blade at the rear. It gets animated indicators, two-tone paint schemes and strikingly large wheels.

There’s also a coupe-ish style shape that’s popular with new car design. Rather than a traditional two-door coupe silhouette, such as a BMW 2 Series, it’s a five-door SUV with a sloping roof line. It’s full of sculpted lines to help break up the fact it is a bit gelatinous in shape. These lines get a bit lost in dark colours though.

The interior is dominated by twin 12.3-inch screens. The first one acts as an infotainment, while the second is a digital display for the driver.

The seats are firm and you sit high up, which really gives you a clear view out ahead. Cast your eyes across the interior and you’ll see it’s purposely sparse. Instead of physical buttons for things such as heating controls, the Ariya employs haptic feedback. It works a bit like a smartphone, in that you press it and it provides a click, but it’s not a button.

There are two gloveboxes. One is centralised and opens electronically. It seems like a bit of a gimmick. The central armest is moved electrically and works really well. It means you can place your elbow where you want.

The Ariya gets a new ‘hey Nissan’ voice control system as well as Alexa voice functionality. There’s also a Nissan smartphone app to check battery status and set the climate control remotely as you can in many of its electric rivals.

Nissan says that it has the room of a much larger car inside, and this is down to the space efficiency of an electric car, which does not need to house the bulky engine and gearbox in the usual place.

Good news on this front. It feels massive. There’s no transmission (like with most other electric cars) so you don’t have a transmission tunnel running down the centre. This means the floor is flat, ensuring there’s loads of room for passenger’s legs.

The centre console is large and contains cup holders the perfect size for coffee cups. Open this up and you’ll find a wireless charging pad. Storage bins up front are large enough for litre-bottles.

At 466 litres the boot size is some way behind the likes of the Skoda Enyaq, but it is larger than the Ford Mustang Mach-E, which measures in at 402-litres. We should also mention that boot space shrinks to 408 litres for all-wheel drive models.

The Ariya comes with the choice of two- or four-wheel drive, and will be offered with two power and torque outputs. The entry-level front-wheel drive 63kWh Ariya develops 220hp and 300Nm for a maximum speed of 99mph and a 0-62mph time of 7.5 seconds. Nissan says that this version will have a 233-mile range in real-world WLTP testing.

The larger (87kWh) battery pack delivers 245hp with the front-drive motor, and this one covers up to 310 miles on a single charge.

Star of the show will be the range-topping Ariya 87kWh Performance model. You get 395hp and 600Nm of torque for a 0-62mph time of 5.1 seconds. Maximum speed is 124mph. Battery range for the Performance model drops to 248 miles.

So far we’ve only tested the entry-level front-wheel drive 64kWh model. Despite being the base level, it’s by no means slow.

Like with other electric cars, there’s significant shove from standstill, which tails off above 50mph. There’s pronounced bodyroll at speed, which means when you change directions quickly you’ll feel yourself moving in your seat significantly. It’s nothing to worry about, but the Skoda Enyaq feels a lot less boat-like.

On the smooth nearly faultless tarmac of a closed circuit, the Ariya felt very comfortable, even with large 20-inch wheels. You feel very disconnected from the road beneath you, in a good way.

There are different drive modes that dial the throttle response up and down. Broadly this translates to how hard you need to push the accelerator to achieve full acceleration. In Sport it feels alert and poised, while in Eco it’s much tardier. But Eco will prove to be more frugal too.

We’ll have to see what it’s like on UK roads before we give it a full valuation.

The 63kWh Ariya gets a 7kW charger for home connections and the 87kWh versions come with a 22kW three-phase set-up, where the home set-up can deliver this.

The good news is that it uses the latest CCS charger set-up, and can support the fastest public charging, with up to 130kW.

Read on to find out whether the Nissan is worth buying, and how much it should cost when it goes on sale later in 2022.

Mercedes-Benz
EQA SUV
3.9 out of 5 3.9
Advertisement
How much is it to insure?