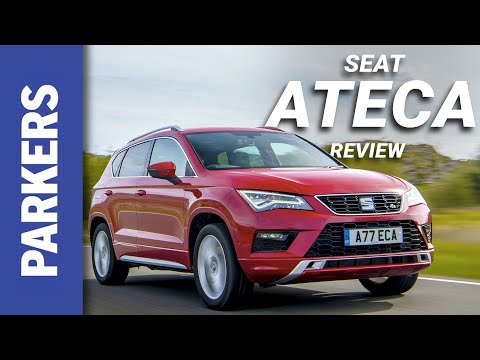 SEAT might have been late to the SUV market when it launched the Ateca in 2016, but few could argue it’s wasted any time playing catch-up. Combining excellent practicality, keen pricing and sharp handling, the Ateca is now one of the Spanish manufacturer's most popular models.

Subsequently joined by the smaller Arona and Skoda Kodiaq-based Tarraco, it sits right at the heart of manufacturer’s SUV range and goes head-to-head with rivals such as the Nissan Qashqai, Renault Kadjar and Ford Kuga, plus many more. It's a crowded market and to be good, you need to stand out.

And now the Ateca is due for a facelift in the coming months, which should see it receive a sharper-looking front- and rear-style, which ties it in with the new Leon, launched in 2020. It won't be an all-new car, but there will be plenty of changes – but for now, let's concentrate on this one.

Six trim levels to choose from

There’s a whole raft of safety and assistance systems that can be added as well, making your driving experience as stress-free as possible. In relation to the closely related Volkswagen Tiguan and Skoda Karoq, the SEAT Ateca is well priced and doesn't really lose out to the newer cars in terms of tech or equipment.

The SEAT Ateca engine the line-up consists of your usual choice of petrol and diesel engines in a wide range of outputs. Petrol-wise there’s a fuel-sipping 1.0-litre EcoTSI unit with three cylinders and a 1.5-litre TSI Evo that can shut down half its cylinders when they’re not needed to maximise economy. At  the top of the petrol range is a 2.0-litre EcoTSI with 190hp with an automatic gearbox and all-wheel drive.

If you prefer diesel power, buyers can choose between 115hp 1.6-litre TDI, 150hp 2.0-litre TDI and 190hp 2.0-litre TDI engines. A combination of automatic gearboxes and 4Drive all-wheel drive systems can be specified on particular engines, meaning there should be something to suit most tastes.

Sitting in its own little sub-brand is the Cupra Ateca. With no SEAT badges in sight, it's the first model under the newly-formed Cupra sub-brand, and the debut model is based on the Ateca, with a 300hp 2.0-litre TSI engine under the bonnet, unique styling and a DSG gearbox and 4Drive all-wheel drive.

Some very attractive leasing deals are also available on the Ateca, which is attracting som. Leasing is essentially like a form of long term rental. You pay an initial payment, then a series of monthly payments, then you hand the car back. Our leasing partner, ZenAuto, is offering SEAT Atecas from £245 per month. The usual terms and conditions apply.*

What else do you need to know?

Alongside those sharp creases in the bodywork, an equally sharp drive has become something of a SEAT hallmark. We’re happy to report that the Ateca carries on this tradition with a firm but supple ride and steering that reacts quickly to wheel movements.

In short, it’s great fun for what is essentially a sensible family car. There are lots of models and engines to choose from, but it currently lacks any sort of hybrid version, which might put some buyers off. But it's good looking, great value, sporty and has bags of appeal – is this enough to drag customers away from default SUVs like the Nissan Qashqai, though?

Click through the next few pages to read everything you need to know about the SEAT Ateca including its practicality, how much it costs to run, what it's like to drive – and whether we recommend buying one.

*These deals are indicative examples of some packages available as of 21 February 2020 but are subject to change without prior notice. Everyone's financial circumstances are different, and the availability of credit is subject to status. Terms, conditions and exclusions apply. Parkers cannot recommend a deal for you specifically. Bauer Consumer Media Limited is an appointed representative of ZenAuto Limited for the broking of regulated hire agreements. ZenAuto Limited is authorised and regulated by the Financial Conduct Authority. ZenAuto Limited's registered office is Number One, Great Exhibition Way, Kirkstall Forge, Leeds LS5 3BF. ZenAuto Limited's company registration number is 10967345. ZenAuto is the trading name of ZenAuto Limited. Terms, conditions and exclusions apply.

SEAT Ateca off road side