The first Cupra SUV is a hot-hatch in disguise 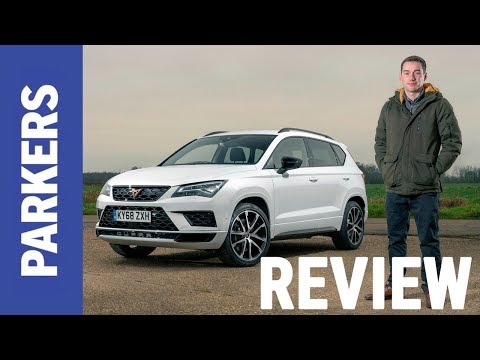 The Cupra Ateca is a performance version of the SEAT Ateca SUV - but don't call it a SEAT. Cupra is now a brand in its own right, rather than a name for faster versions of SEAT models. It's been around for a while on the bootlids of various hot hatchbacks, but now the new Cupra logo sits proud on the front of the Ateca - the first standalone model - with more to follow with the Formentor and upcoming Cupra Leon.

The Cupra brand exists to appeal to a new range of buyers, with 80% expected to be new to SEAT/Cupra. And by offering something that doesn't appear to have any rivals, there's an air of exclusivity about it. The Ateca deliberately sits bang in the middle of regular crossovers and SUVs from mass-market brands and more premium offerings, like faster versions of the Audi Q5 and Mercedes-Benz GLC.

That did't last though, Audi has the SQ2 and Volkswagen has the T-Roc R, both of which use the same engine and other mechanical components, while there are 300hp versions of the Jaguar E-Pace and even Range Rover Evoque, as well as the BMW X2 M35i.

At first glance, the Cupra branding is a little in-your-face. That could be because it’s new and unfamiliar, but the aggressive-looking badge, extensive bodykit and use of copper and carbon trim details will be an acquired taste for many. Get the spec right, and it’s a menacing-looking thing that looks quite special. There's a risk that it can look like you’ve added some of the bits yourself with some combinations, however, but it also manages to look quite tame in some specifications. SEAT/Cupra has managed quite a trick there.

Elsewhere the changes are relatively subtle, with carbonfibre trim adorning much of the cabin, Alcantara faux suede accents, sports seats with extra side bolstering and a Cupra-specific virtual cockpit digital dial setup.

Of course, the basic dashboard design, switchgear and door panels are shared between the Cupra and SEAT Atecas, but the trimming feels more luxurious on the former, helping to justify its higher price and, theoretically, making its occupants feel more special. The touchscreen infotainment system is just as you’ll find in other cars, so it’s easy to use and full of connectivity options such as Bluetooth, DAB radio, Apple CarPlay and Android Auto and sat-nav.

The Cupra Ateca uses a 2.0-litre TSI turbocharged powerplant producing 300hp. Channelling the power via a seven-speed DSG automatic gearbox to all four wheels results in a claimed 0-62mph acceleration time of 4.9 seconds before pressing on to a top speed of 152mph. Clearly this promises to be a quick five-seater SUV. For a tall car it handles well, just like a regular Ateca.

To add a little more visual appeal, the Cupra Ateca Limited Edition comes with carbon fibre on the door mirrors and rear spoiler, larger 20-inch wheels with copper detailing and blue Alcantara seats. Engine performance remains the same, but you get Brembo brakes, as well as the option to upgrade to an Akrapovic exhaust system.

Where can I buy a Cupra Ateca?

The majority of existing SEAT dealers will be able to sell and service these models from a dedicated ‘Cupra Corner’ of the showroom, sold by a ‘Cupra Master’ (also known as a sales executive). There will also be a range of lifestyle accessories available to customers, so that those experiencing the brand feel immersed and part of a new community, according to SEAT. It’s also worth noting that Cupras come with a four-year warranty instead of SEAT’s three-year offering, and the price is inclusive of servicing and maintenance costs.

Click through the next few pages to read everything you need to know about the Cupra Ateca including its practicality (below), comfort, how much it costs to run, what it's like to drive – and whether we recommend buying one.