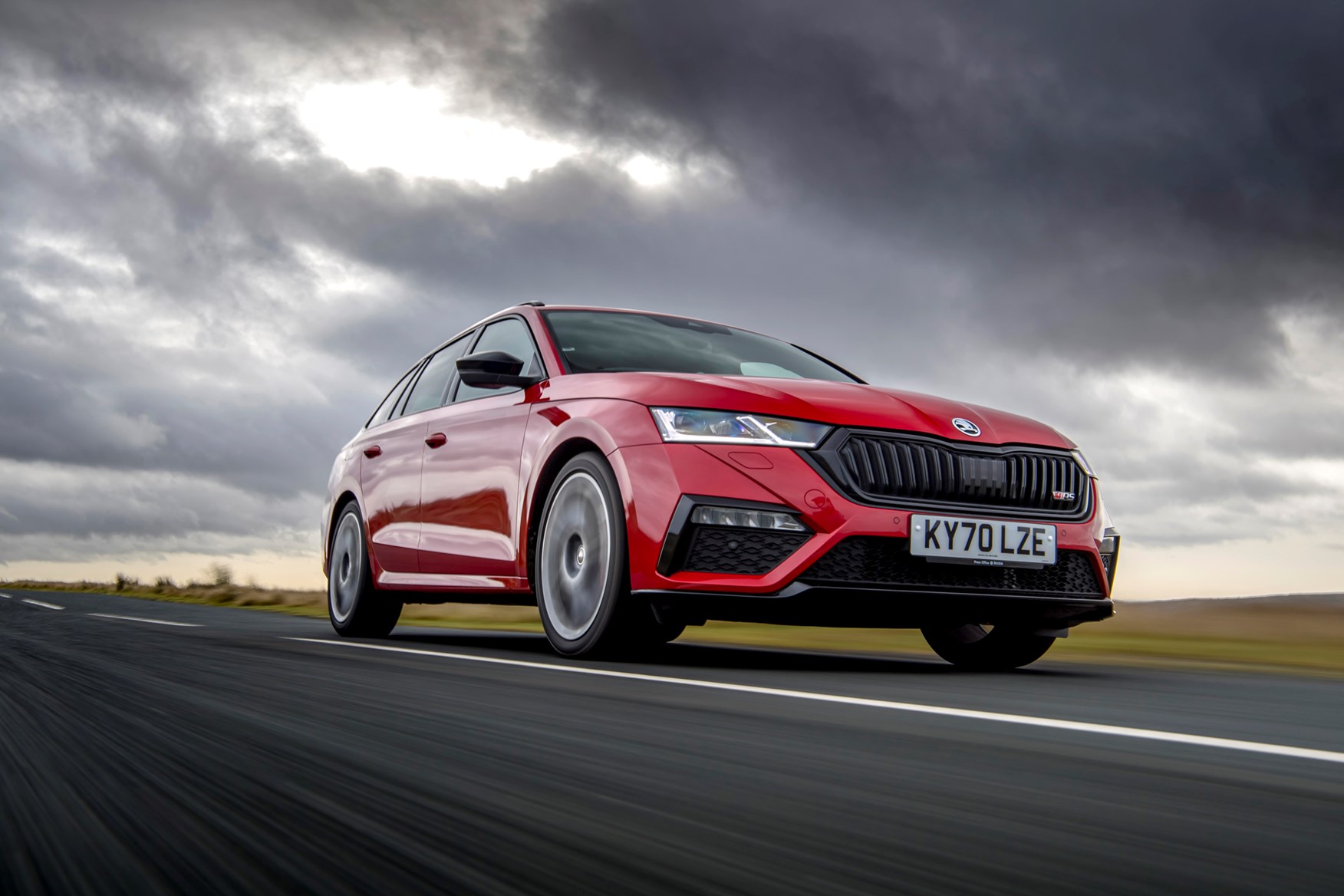 What engine options are there?

The Octavia’s engine selection is made up of petrol, diesel, mild-hybrid and plug-in hybrid (PHEV) options. You can choose between a six speed manual gearbox or a seven-speed DSG automatic. The plug-in hybrid uses a six-speed DSG gearbox only.

The smallest engine you can choose is a 1.0-litre, three-cylinder petrol. With 110hp and 200Nm of torque, delivers adequate performance. The larger 1.5-litre is more potent with near-identical performance in petrol and diesel forms.

It’s less responsive at low engine speeds than the equivalent diesel, but it’s really smooth and feels more than fast enough for most applications. It’s also a great pairing to the six-speed manual gearbox, which feels solid and positive. Though like many Volkswagen Group gearboxes it doesn’t like to be hurried.

A pair of 2.0-litre TDI units make up the diesel offering, with 116hp or 150hp, available with manual or DSG transmissions. Drivers who do particularly high mileage or plan to load the vast boot up to max capacity will prefer one of these muscular units. A little noisier than the petrol (though not by much) with a metallic edge to its sound that disappears once you’re on the move.

We think the 150hp car is the best version currently available, mixing plenty of easy-to-access torque and bulletproof fuel economy on offer. With 340Nm of torque and an 8.8 second 0-62mph time, it’s more than fast enough for most needs with the car empty, hinting at sufficient performance even when it’s loaded up. Top speed is 139mph.

Finally, a PHEV called the Octavia iV is available, making use of a 1.4-litre TSI petrol and electric motor. It uses a six-speed DSG transmission, and Skoda claims the 13kWh battery means it can travel up to 43 miles on battery power alone. It's not that the iV is a performance model in any sense, because those punchy power and torque figures don't translate into quite the straight line speed you might expect. That said, this Octavia certainly feels swift enough despite 135kg of extra weight.

Where this model excels is making quiet and refined progress on electric power, for the most part, with the petrol motor reluctant to contribute. This makes it easy to waft around on battery power without you needing to watch the gauges to keep the four-pot at bay.

Joining the mainstay petrol and diesel vRS performance models is a plug-in hybrid with 245hp, the same as the pure petrol version.

With 245hp and a 0-62mph time of 6.7 seconds you might wonder exactly what is different this time round for the petrol powered vRS and the answer is, under the bonnet at least, not all that much.

The 2.0-litre four-cylinder motor has been fettled a bit for better fuel economy but otherwise it’s the same unit as the last car, with six-speed manual and seven-speed DSG options. The latter is super smooth when you want it to be and punchy when the mood takes you, and is responsive enough to be left to do the job alone.

It's no bad thing that not much has changed in this department though – the drivetrain in the outgoing vRS was one of its strongest features and if it’s not broken, why fix it? There are a few differences we noticed however – it’s quieter (a lot quieter in fact) and the automatic box seems keener to shift up rather than hang onto low gears.

Both of those suit the Octavia’s laid back sensibilities though, so for once we’re not complaining about the lack of evocative soundtrack in a modern hot hatch.

The diesel vRS isn't as sweet to drive as the petrol, but offers plenty of usable everyday performance with 200hp and 400Nm of torque. You can only have the DSG gearbox, but you do have the choice of a four-wheel drive option. It takes 7.4 seconds to get from 0-62mph and top speed is 152mph - however, opt for the 4x4 version and it's even quicker to sprint to 62mph, at 6.8 seconds, although top speed drops to 147mph.

The two- and four-wheel drive versions pull strongly and consistently between 2,000-3,500rpm. They pick up momentum quite well from stationary, too, but wanting a downshift from the automatic gearbox when you're on the move in Normal mode can take a while – you need a firm press of the throttle pedal to about halfway down before it changes down a gear.

This can make for a slightly binary experience as it feels like it can be asleep one minute and suddenly awake the next. This is especially if you slow down for a second-gear junction and it stays in third, leaving you with little acceleration as you exit the turning, followed by a downchange and wheel spin further down the road. This is when the vRS TDI continues to feel a little blunt and dulled-down compared to the petrol.

It's perfectly fine around town in low-speed environments, as the laidback gearchanges suit the relaxed driving style. It's smooth, doesn’t get bogged down and is well calibrated for these conditions, with a useful amount of engine braking, too. It's when you decide to pick up the pace and make the most of the vRS chassis that it requires a bit of encouragement from the driver. Select Sport mode and the gearbox is a little more alert, but you'll still be better off shifting manually, at which point the gearshifts remain nice and smooth.

This is one area where previous Octavia owners will notice an improvement almost instantly – this generation of car just feels more confident and grippy, especially when equipped with the optional adaptive dampers. The steering feels more precise - although just as uncommunicative as before - allowing you to accurately place the car on the road.

You do still get quite a bit of bodyroll (when the car leans one way or another in a corner) and reality it’s this, rather than the high level of grip the tyres summon up, that limits your ability to drive quickly. That said, there’s noticeably less wheelspin when you pull away quickly than we remember, and the sophisticated traction control system allows you to drive quickly without interfering too harshly.

When all’s said and done though it's worth considering that this is a car likely to be packed full with either passengers or stuff in the boot and from that respect the handling is entirely fit for purpose.

Is the plug-in iV any different? Not really, other than the extra weight and soft suspension giving a slightly floaty quality, but otherwise there's plenty of grip and ride comfort. The nicely weighted and calibrated driving controls remain, although the brake pedal can feel a bit abrupt in comparison to a non-hybrid model.

Grippy and assuring in the finest of vRS traditions, without the flamboyance (and some of the excitement) present in more focussed hot hatches like the Ford Focus ST. That's not to say it's no fun to drive, far from it, and in reality it's less buttoned-down than an all-wheel drive Audi S3, for example.

The special VAQ differential is now standard fit on petrol models - this is a clever addition that helps divide up the power between the front wheels to ensure strong traction at all times.

Variable ratio steering means the wheel is easy to twirl at low speed and confidence-inspiringly heavy when you're driving fast, although it's still a bit light for our tastes. Select Sport mode and this adds a little more weight to feel more consistent throughout. The brakes are also effective, with a good, reassuring level of weighting from the pedal.

There's more bodyroll than its rivals too but the trade-off is a ride quality that is firm but still much easier to live with, so we can accept a bit more movement in faster corners.

What about the vRS diesel?

The vRS TDI is a little less exciting as a performance package, but it can still be hustled along country roads that play into the diesel’s cards – the mid-range torque means you can make brisk progress without trying too hard. It's not one for out-and-out thrills, just some of the time - which makes sense if the majority of your routes are motorways. It's just a shame the levels of refinement aren’t quite up to scratch for that environment if that is where you spend most of your time.