This car has been superseded by a newer model, click here to go to the latest Skoda Octavia Hatchback review.

Genuinely great value for money, with bags of space and equipment 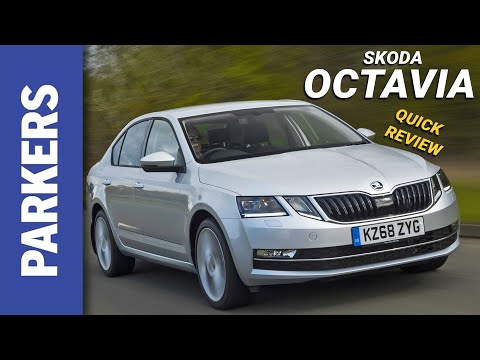 Written by Richard Aucock on Yesterday 09:20

The Skoda Octavia is a top-notch no-nonsense all-rounder. Since the original model’s launch in 1998, it has been a car that offers more space than most, for a price that somehow still manages to undercut alternatives such as the Volkswagen Golf and Ford Focus. Indeed, although it’s derived from the Golf, its size actually places it mid-way between this and the business-class Volkswagen Passat.

The Octavia Mk3, launched in 2013, is a cracker of a car. Much more sophisticated than its predecessor, it offered contemporary tech, a superb range of turbo petrol and diesel engines, and a sporty vRS range-topper that now has a cult following all of its own. And the crisp lines gained added character with a distinctive facelift in 2017.

It’s famous for its huge 590-litre boot, which expands to 1,580 litres in the hatch, and a whopping 1,740 litres in the estate. Rear seat space is better than the rest, too. And all models have a decent spec, with air con (including a cooled glovebox), DAB radio and Bluetooth standard on every Octavia. The Octavia has a strong reliability record and even greater owner satisfaction, with prices starting from less than £4,000 only adding to its appeal.

Buying guide – common issues, and what to look for if you’re looking at getting one.

As an alternative to the standard six-speed manual, the Mk3 Skoda Octavia comes with two types of DSG dual-clutch automatic: six-speed or seven-speed. The seven-speed is fitted to lower-power cars: 1.6 TDI and 1.4 TSI. The stronger six-speed is used on the 184hp 2.0 TDI vRS, and its 2.0 TSI petrol sibling that offers up to 245hp. Some overlook the fact DSG gearboxes need servicing every 40,000 miles, so check the service history – and, during a test drive, watch out for any hesitancy, jerky shifts or other odd sensations.

All but base Octavia S models feature touchscreen infotainment, with sat nav fitted as standard to many. System glitches are a surprisingly common problem, particularly on 2017-on post-facelift cars, particularly those with the large-format 9.2-inch Columbus system. Try entering a destination and seeing how quickly and smoothly it operates – you don’t want to see the spinning wheel of doom and a frozen screen!

The Skoda Octavia has long been popular with taxi drivers. It’s not hard to see why: it’s roomy, affordable, has a huge boot, is good on fuel and has a strong reliability record. It’s worth being mindful of this when checking out bargain secondhand cars, particularly those with high mileages. Is there evidence lots of people have sat in the back? Is the driver’s seat worn, and the steering wheel shiny? So long as they’ve been serviced often, ex-taxis are still worth considering if the price is right, but they do need a thorough going-over.

The water pump issues that can afflict other Volkswagen Group cars is a reliability gripe that can affect the Octavia too, particularly 1.2 TSI and 1.4 TSI models. Check beneath the car for evidence of water leaks, and keep an eye on the temperature gauge when driving – it should stick at the mid-way point and not budge.

Skoda offered the choice of two approaches to servicing. The regular setup was fixed one-year or 10,000-mile intervals. But for higher-mileage drivers, a variable servicing alternative was available, stretching intervals up to 18,000 miles if motorists were easy on the car. Be mindful of this when checking the service history – and it’s fine if a car that was on variable servicing is later switched to a fixed annual regime.

Diesel Skoda Octavia were by far the most popular choice when new, and this is reflected in the way they significantly outnumber petrols. Diesel may be out of favour amongst new car buyers, but it still makes sense for bargain-hunting used car buyers, particularly given the ease with which you’ll probably see well over 50mpg in everyday driving. The 2.0-litre diesels are tempting, particularly the vRS, but the sophisticated, smooth-running 1.6 TDI is a great choice too. Check they’ve been serviced regularly, that the exhaust isn’t smoky, and there aren’t any yellow warning lights showing on the dashboard.

Most Mk3 Skoda Octavia have timing belts, which need replacing as mileages tick over into six figures. Look for evidence it’s been done. The two Octavia engines that use timing chains are the (very rare) 1.8 TSI and the 2.0 TSI vRS. With these engines, it’s an idea to listen out for any rattles, particularly on start-up; otherwise, the timing chains are pretty robust and long-lived.

If you want free road tax as well as great fuel economy, look for a 1.6 TDI diesel. You won’t only see upwards of 60mpg on a motorway run, but enjoy zero annual VED. The most economical 1.6 TDI of all is the Greenline, which officially averaged over 80mpg thanks to features such as aero tweaks and low rolling resistance tyres – although the latter may well have disappeared by now as owners replace the rubber with more cost-effective options.

A nice option to look out for is the winter pack: it brings heated windscreen, heated front seats and heated windscreen washer jets. A heated windscreen will clear ice in 90 seconds on a frosty morning, while the heated seats are a toasty treat. Other models to look out for are ‘Sport’, ‘Business’ and ‘Technology’ versions of the core SE variant: to that car’s rear parking sensors, dual-zone climate control and front fog lights, they add useful extras – such as touchscreen sat nav on SE Technology.

The Octavia should have a fluorescent green ice scraper tucked away behind the fuel filler flap door. Check it’s still there, as they can go missing (saying that, a replacement is only £7). It’s not a deal-breaker, but can be a sign of how well a car’s been looked after. If it’s missing, does the rest of the car show little signs of not being cared for?

Read on for the full Skoda Octavia review