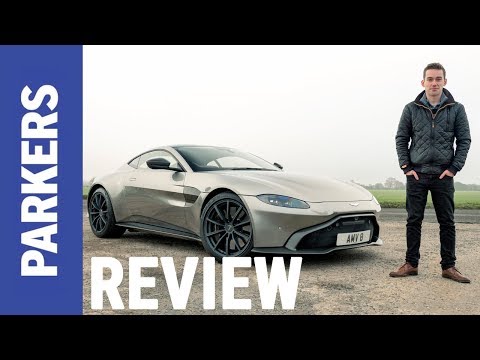 Written by Lawrence Cheung on 30 October 2019

The latest Aston Martin Vantage has been a long time coming – the last model arrived in 2005 and, even though production only ended at the beginning of 2018, the wait for its replacement almost felt like an eternity. In the second quarter of 2018, the British manufacturer’s best-selling sports car finally made its return.

It’s longer, wider and taller than its predecessor. Plus, the firm’s partnership with Mercedes-Benz means the engine and infotainment system has taken a dramatic turn too, but is it for the better?

The Aston Martin Vantage counts the Porsche 911 Carrera GTS and Turbo as rivals, along with the Jaguar F-Type SVR and Mercedes-AMG GT. Unlike the 911 Turbo and F-Type SVR with their four-wheel drive systems, the Vantage is more akin to the rear-wheel drive AMG, featuring a front/mid-mounted engine. This means it sits ahead of the driver, but behind the front axle for better weight distribution and more agile handling.

In fact, the Vantage use the same twin-turbocharged 4.0-litre V8 engine from Mercedes-AMG, which produces 510hp and 685Nm of torque. According to official figures, the Vantage accelerates from 0-62mph in 3.7 seconds, has a 195mph top speed and achieves 26.8mpg with a CO2 output of 245g/km.

What is an Aston Martin Vantage?

Under its steel bodyshell, the Vantage rides on an evolution of the aluminium chassis first seen on Aston’s larger DB11 – the double-wishbone front and multi-link rear suspension hardware is identical, for instance – but Aston claims that overall the structure is 70% new.

Despite the use of aluminium, the Vantage is quite heavy at 1,630kg – similar to the AMG GT and 911 Turbo Coupe, though over 150kg heavier than a rear-wheel drive Porsche 911. Even so, the near 50:50 weight distribution and electronic rear differential should help with the way the Vantage drives.

When it comes to styling, you have a range of colour combinations to go for, from a restrained black and red interior to a more striking finish with Copper tan, Lime Essence or Yellow Tang. So the Vantage is back, but with its price hike and large titanium front grille that bears a slight resemblance to the Vulcan hypercar. It’s not quite the same as it used to be either.

Aston Martin’s been making waves by putting some of its 1960s classics back into production, including a James Bond DB5 complete with authentic Q-branch gadgets (yours for £3.3m). But for a slightly more reasonable £149,995 it will sell you another slice of nostalgia: a Vantage AMR with a manual transmission.

Manual transmissions are quickly falling out of favour, particularly in high horsepower sports cars. But Aston Martin, like Porsche, has committed to offering an alternative to the default automatic gearbox for the small bunch of enthusiasts that come over all OCD when it comes to changing gear.

Later in 2020 you’ll be able to order a manual transmission in the standard Vantage, but for the moment its exclusive to the new AMR. But what exactly is an AMR? It stands for Aston Martin Racing and signifies an Aston that’s a little lighter and a little more focused in the corners. We’ve already seen the badge used on the DB11 and Rapide. But don’t go getting the idea that this is some kind of hardcore 911 GT RS rival. The AMR is much more liveable.

And much more discreet. In fact its not easy to tell these 200 limited run cars from the standard Vantage, unless you go for one of the 59 ‘Vantage ‘59’ AMRs decked out in a lively paint to commemorate the 60th anniversary of Aston’s Le Mans win and wearing a £164,995 pricetag.

But what's it like to drive? We've got a full rundown in the Performance section.

Is it still a sports coupe to lust after? Read the Parkers full review to find out