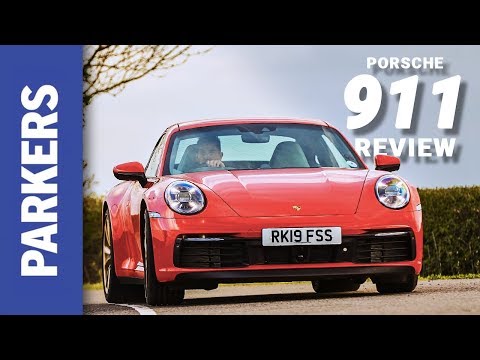 You won't notice an overhaul in exterior design between 911 models - this German coupe is treated to the most careful of automotive evolutions, primarily because buyers want their car to be unmistakably a 911. Simple as.

However, for this generation (known internally as 992), there has been a substantial change under the skin. All engines are now turbocharged, and the interior features more digital elements than ever before.

The Mk8 911 faces its traditional foes of the Aston Martin Vantage, Audi’s R8 Coupe, Ferrari’s 488, the Lamborghini Huracan Evo and the Mercedes-AMG GT, although none of those features the Porsche’s historic rear-engined layout.

What exactly is the 911 Coupe?

There’ll be a whole family of 911 variants over the coming years, but initially British customers were limited to the Carrera S and Carrera 4S Coupes, the latter with four-wheel drive. Standard Carrera (plus Carrera 4) followed later, along with the range-topping Turbo S.

Powerful GT3 and GT2 versions have sold out, while a GTS and Targa is set to arrive to complement this Coupe model and soft-top 911 Cabriolet.

As with all generations of 911, the latest model has a pair of small rear seats that can be folded over to boost its luggage-carrying ability, while the styling gives a mild update to themes from the outgoing model, even though the bodywork is fresh.

Porsche has tweaked the twin-turbocharged, horizontally opposed six-cylinder engine (think of it as a V6 with a 180-degree arc between the cylinder banks) to produce a rude 450hp in Carrera S form, representing a 30hp increase.

Both S versions complete the 0-62mph acceleration sprint 0.4 seconds faster than their predecessors: the rear-driven Carrera S requires a scant 3.7 seconds for the benchmark, the additional four-wheel drive traction of the 4S shaving 0.1 seconds off that.

Opt for the Sport Chrono Package and you can slither a further 0.2 seconds from both of those times. Top speed for the Carrera S is 191mph, while the slightly heavier four-wheel drive Carrera 4S tops-out at 190mph.

For the ultimate in 911 performance though look no further than the Turbo S - with 650hp this road-going rocket will race to 62mph in just 2.7 seconds. That's faster than the company's own electric Taycan.

In spite of that rapidity, Porsche’s official claims are that the new 911 Coupe will return around 25-30mpg depending upon the model, with CO2 emissions between 205 and 254g/km.

The conduit between the engine hanging beyond the rear axle and the driven wheels is a new eight-speed PDK dual-clutch automatic transmission. We do expect a manual – probably an updated version of the existing seven-speeder – but it’s not available straight away.

Will there be an electric version of the 911?

Yes, we’re expecting a plug-in hybrid version of the Mk8 911 to join the range within a couple of years of launch, given Porsche’s expertise with E-Hybrid versions of both the Panamera luxury saloon and Cayenne SUV.

It’s theoretically possible – but unlikely at this stage – that a fully electric 911 could form part of the range later in the model’s lifecycle providing Porsche doesn’t feel it will negate from the sports car range’s overall appeal.

Porsche already produces an electric-only model, the Taycan, a four-door sports coupe that in many ways rivals what the 911 offers.

What else do we know about it?

Technology marches on and has swept the 911 along with it. This is immediately obvious in the cabin, where an analogue rev-counter is flanked by a pair of adaptable screens, while the multimedia system is controlled by a wide 10.9-inch touchscreen.

Further advances that debut on the eighth-generation 911 Coupe include a Wet driving mode that monitors for damp surfaces and preconditions various safety and control systems in anticipation of the inferior traction being available.

Additionally there are two web-based apps that Porsche claims enhance the 911 ownership experience.

Road Trip helps enthusiasts plan long, ‘experience’ journeys with pre-prepared routes along with points-of-interest and hotel recommendations, while Impact calculates financial contributions that 911 drivers can make to offset their CO2 footprint. How popular that one proves remains to be seen…

Click through these pages to read everything you need to know about the Porsche 911 Coupe including its practicality, how much it costs to run - and whether we'd recommend buying one.