As arresting to drive as it is to stare at 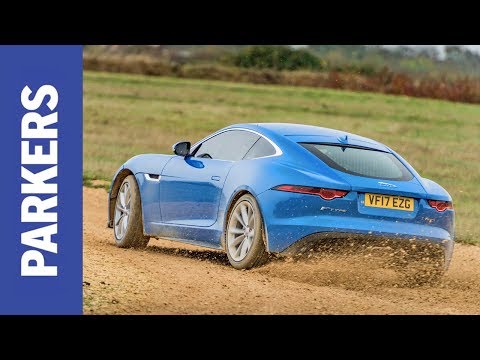 The Jaguar F-Type Coupe is the sole sports car offering in the Coventry-based manufacturer’s model line-up, and has been facelifted for 2020. It simultaneously offers buyers a cheaper alternative to the Aston Martin Vantage and Porsche 911 Coupe as well as the more modest Lexus LC and Porsche 718 Cayman, thanks to a more cost-effective 2.0-litre petrol launched in 2017.

Also available as a convertible, it’s swooping lines and distinctive silhouette mean that many buyers may be sold on looks alone, yet there’s far more to the charm of this car than mere aesthetics. Read on to find out why the Jaguar F-Type Coupe is currently one of our favourite sports cars on sale.

How fast is the Jaguar F-Type Coupe?

Even with an emotionally charged purchase, such as a high-end sports car, raw numbers can paint a very expressive picture. In terms of outright top speed, the slowest F-Type Coupe, powered by a turbocharged 300hp 2.0-litre engine can muster 155mph, while the flagship SVR and its supercharged 575hp 5.0-litre V8 can reach 200mph, with an addictively sonorous soundtrack to match.

Respectively, those two clobber the 0-62mph acceleration benchmark in 5.7 and 3.7 seconds. Self-evidently, it’s not slow. Should those polar opposites of the range be not quite what you’re looking for, there are a pair of 3.0-litre V6s – also supercharged – with 340hp and 380hp, together with a 550hp version of the 5.0-litre V8. All F-Type Coupes are fitted with an eight-speed automatic gearbox as standard, although the rear-wheel drive versions of the V6s can also be specced with a six-speed manual.

Power was sent exclusively to the rear wheels on all F-Types when it was launched, but that’s no longer the case on new ones: Jaguar’s all-wheel drive (AWD) system is standard on the V8s.

Is the Jaguar F-Type Coupe good to drive?

Make no mistake, this is one of the most entertaining sports coupes available. It lacks the outright purity of a comparable Porsche, but despite its modernity, there’s something of an old school charm about the way the F-Type handles, particularly the rear-wheel drive models.

These are significantly more playful – without being wayward – than the all-wheel drive (AWD) versions, allowing you to push hard through corners and feel the tail-end progressively step out of line. Given the power outputs in the upper echelons of the range, AWD arguably makes more sense given Britain’s often wet climate – certainly you can carry more speed – and tighter lines – through corners courtesy of the tyres’ extra adhesion.

Yet, for all of its engaging nature, providing you don’t specify yours with the largest of alloy wheels available, the F-Type remains pleasingly compliant and comfortable – especially welcome on undulating B-roads and rutted urban streets.

How practical is the Jaguar F-Type Coupe?

Observe the F-Type’s tapered silhouette in profile and you’ll appreciate that this is not the ideal companion when you’re flat-pack furniture shopping. Yes, there’s a long, narrow tailgate, but the bootspace within is shallow thanks to the mechanical components diverting power to the back wheels underneath. Think soft bags for weekends away, rather than gargantuan rigid cases.

In traditional Jaguar style, the two-seater cabin is snugly comfy rather than generously spacious, but there’s not a huge amount of space to pack away your in-car detritus. The cupholders are decently sized, though. Most of the materials your hands will explore feel of good quality, but this varies from surface-to-surface, plus the way it’s assembled isn’t going to give Porsche employees any sleepless nights.

A case of evolution rather than revolution, the updated car features a redesigned front-end, upgraded interior and improved performance. Jaguar hasn't given the F-Type the most extensive of facelifts, so other than the horizontal rather than vertical headlights and the accompanying fresh clamshell bonnet, most of the other changes are hard to differentiate when comparing old with new.

Inside, however, the F-type looks essentially the same: there's now a high-definition 12.3-inch display along with Apple CarPlay and Android Auto – as well as a choice of two Meridian sound systems.

Uprated springs, dampers and anti-roll bars mean the F-Type should handle better than its predecessor. The new F-Types were available to order from the beginning of December 2019 from £54,060 in the UK for a P300 Coupe rising to £102,370 for an R P575 Convertible.

We'll be driving the facelifted F-Type early in 2020 and will update the full review to reflect this.

Is the Jaguar F-Type worth considering as a sports coupe? Read the Parkers full review to find out