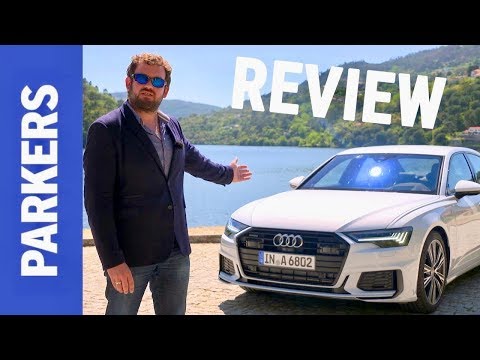 If you think that the Audi A6 Saloon looks similar to not only its predecessor, but also other models in its range, then you're right - it's a deliberate strategy of familiarity. Don’t knock it though, because it’s clearly a technique that works for Audi as well as other brands. You only need to take note of how many cars there are on the road with a four-ringed logo on the grille to realise it’s a tried-and-tested method.

It is a handsome-looking car though, with a large grille that isn’t too in-your-face, and smart, neat proportions that hide an interior packed with the latest technology and impeccable build quality. If you don't want the four-door Saloon, there's also an A6 Avant estate and A6 Allroad for those looking for a halfway house between an estate and an SUV.

But is all that enough to topple rivals like the BMW 5 Series Saloon, Jaguar XF, Mercedes-Benz E-Class Saloon and Volvo S90? From the outside it looks different enough from the competition with cues borrowed from the larger A8 luxury saloon and sleek A7 Sportback, while the interior is its real party piece, packed with kit and generous in its size.

Inside, it’s classic Audi: it’s impeccably well-built and looks great with fantastic-feeling materials for for all those important touch points. The technology on offer here – standard and optional – has some very clever features, including twin touchscreens that work with the Virtual Cockpit instrument display. The lower one of the two is used for controls such as drive mode, sat-nav and temperature inputs into the climate control system. There's haptic feedback like your mobile phone, too, so you'll know when you've pressed the screen successfully.

But as it's a complex car, Audi encourages the driver to use speech input. So, it comes with an online-assisted voice control system (like Amazon's Alexa or Apple's Siri) that accepts natural speech. Tell it you’re hot and it’ll lower the climate control temperature. And yes, it really does work.

Being a full-sized executive car, it's scaled-up for all the family or those all-important mobile business meetings. There’s more rear leg and shoulder room than there was in the already roomy previous-generation Audi A6, plus plenty more space for taller passengers’ heads.

It'll look after you and your family if things go wrong – it's a safe four-door, too, achieving the coveted five-star rating from Euro NCAP in autumn 2018.

UK trim levels are nice and simple, and consist of Sport, S Line, Black Edition and Vorsprung, with a healthy line-up of petrol and diesel engines to choose from. A full plug-in hybrid (PHEV) version badged TFSI e was announced in 2019, in order to head-off the challenge from the similarly electrified BMW 530e and Mercedes-Benz E 300 de.

What engines can I get?

The engine range comprises of five power units – two petrol and two diesels, plus the more sporty S6, as well as the forthcoming plug-in hybrid. These are detailed and reviewed in the engines and performance section of this review, but needless to say that they are all punchy, refined and efficient, which reflects Audi's position as a builder of great engines. Of course, there's a full-bore RS 6 available, but it's only available in the Avant body style.

As well as the engine and transmission options, you also have a choice of four suspension set-ups, which deliver decent ride quality and stable and flat cornering. There's also the option of rear-wheel steering, which is a first for the Audi A6. We’ve tested all this extensively in the engines section, and you can read all about the benefits that this system brings to you there.

Our leasing partner, ZenAuto is offering Audi A6s from £443 per month.

The latest incarnation of Audi A6 Saloon looks and feels very much like the tech-heavy premium four-door you'd expect it to be, but the big question is should you take one over a BMW 5 Series or Mercedes-Benz E-Class? Read on to find out.

2018 Audi A6 interior and dashboard