Brilliant handling, refinement and practicality for the new 4 Series

Is the BMW 4 Series Gran Coupe any good?

We're not giving too much away this early in the review by saying that it's a good car. The second-generation BMW 4 Series Gran Coupe is a five-door hatchback closely related to the brilliant 3 Series saloon and 4 Series Coupe, so the ingrediients are all there for an excellent five-door family car.

The new 4 Series has a wide-opening hatchback, striking styling, and an impressive range of efficient petrol and diesel engines. It features BMW's deep new kidney grille and looks quite different to the coupe that shares its name, thanks to new bumpers front and rear. It comes with LED headlights and BMW’s Laserlight technology is available as an option. You'll be forgiven for thinking you've seen it before – it shares its bodywork with the all-electric BMW i4.

BMW says that it has several advantages over the 3 Series. It's sleeker, the body is stiffer and the suspension set-up is sportier. Being a five-door coupe, it doesn't have too many rivals, but the Audi A5 Sportback, Volkswagen Arteon and Peugeot 508 are the closest in concept to the 4 Series Gran Coupe.

The 4 Series Gran Coupe shares its dashboard with the BMW 3 Series, and is none the worse for that. As you'd expect, the emphasis is on sporting looks, so you get aluminium and piano black trim and sports seats. The dashboard is dominated by a 10.25-inch infotainment screen, and ahead, there's a 12.3-inch digital screen for the instruments. If that isn't enough, a head-up display is also available as an option.

It's roomier up front than its sleek appearance suggests – but that's because it has a long wheelbase (distance between the front and rear axle lines) – and is quite a large car, measuring 4,783mm in length and 1,852mm wide. The rear-seat room is a little tight, though, with an average-height person finding their head brushing the rooflining.

The boot space is up on the old model, with 470 litres with the hearts seats up (compared with 421 before), and very usefully shaped, with a wide, square-shaped opening. Rear seats also fold three ways – with a 40:20:40 split. 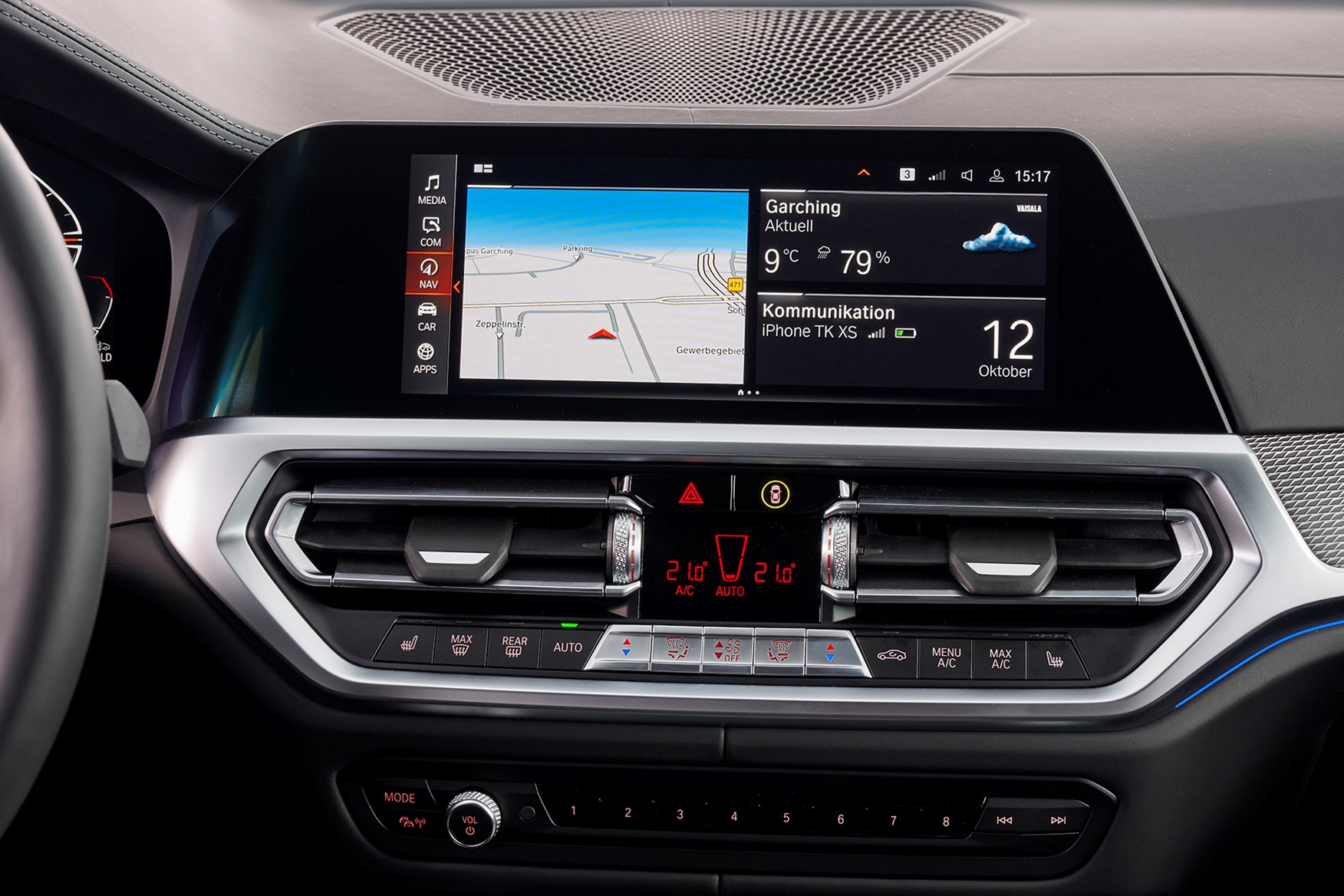 The Gran Coupe features the latest version of BMW's infotainment set-up, which is operated using the iDrive controls sited on the centre console or by using the touchscreen – as well as by voice activation. Doing it by voice is by far the best way, as the physical controls can be a little difficult to get used to.

The cloud-based BMW Maps navigation system has excellent route mapping on its big, clear screen and can actively manage the route depending on how busy the roads are. It's also available with Apple CarPlay and Android Auto.

It's powered a familiar engine range, with the line-up kicking off with the 184hp 420i petrol model. It's a four-cylinder 2.0-litre turbo engine, and gives the model lively performance – 0-62mph in 7.9 seconds and maximum speed of 146mph. It's quite economical too, with a WLTP test figure of 42.8mpg.

You can still get a diesel, although the range is limited to just one engine and rear- or four-wheel drive. The 420d is good for 190hp with the fuel consumption figure being an impressive 58.9mpg. Acceleration is strong too, with a 0-62mph time of 7.3 seconds.

Much of the car's hardware is shared with the 3 Series, and that means a low centre of gravity and almost 50:50 weight distribution, so the ingredients are all there for an excellent drive. We've so far driven the range-topping four-wheel drive M440i xDrive.

It steers accurately and handles with precision and agility that’s surprising considering it's a heavy car that weighs 1,825kg. Stick it in Sport mode, and the steering gets heavier and more responsive, which adds to its confidence-inspiring feel.

The M440i’s engine backs all this up with punchy acceleration and a great six-cylinder soundtrack. If you need to overtake, pull the left paddle for a second or so, and the car drops a couple of gears and readies itself for action in Sprint mode. Then, it rockets forward. But drive in a relaxed manner and noise levels are low with impressive high-speed stability and refinement.

Ride comfort favours cars fitted with the optional adaptive damping. In Comfort mode, it's smooth and unruffled, whereas Sport mode is too revealing of poor road surfaces for our liking, being firm and stiffly damped. An impressive performance overall, and quite a step-up from its predecessor.

All 4 Series Gran Coupe models are sold in M Sport form. That means sporty high-gloss black instead of chrome for the exterior and an aggressive-looking bodykit. All models get 18-inch alloy wheels, with a range of larger ones as an option. Premium leather trim is fitted inside across the board, as well as anthracite headlining.

Now, read our verdict to see whether we recommend the BMW 4 Series Gran Coupe.

Advertisement
How much is it to insure?
BMW 4 Series (2021) rear view