As you've no doubt noticed, two of the other cars on the Parkers long-term fleet are the Volkswagen Golf and the Vauxhall Astra - both main competitors to Ford's Focus. When it comes picking a medium-sized hatchback, these three cars are usually top of the list.

My Focus, Tim Bowdler's Golf and Gareth Evan's Astra are all quite differently specified, so I'm not going to compare them based on kit levels or differences in performance. That'd be somewhat unfair - especially when you consider that the cars range from a 1.2-litre turbocharged petrol with few optional extras, up to a 2.0-litre turbodiesel with lots of boxes ticked.

What I will compare them on, however, is things that remain relatively unchanged regardless of the specification.

Firstly, there's the styling. The Astra does nothing for me - in more ways than one - because it looks relatively plain and uninspiring. I'm not saying that the Focus is a masterpiece but it's much sharper and more interesting to look at. The Vauxhall, especially in darker colours, is rather shapeless and bland, lacking that important front-end definition needed to give it some presence.

You may be inclined to think the same about the Golf, given that its design is hardly revolutionary and that it looks, well, just like a Golf. That, however, has its own peculiar charm. You know what you're going to get, it's recognisable and it's not going to cause any offence. The Astra suffers more from its blandness as it was supposed to be a big leap forwards from the previous generation but just ended up losing any kind of distinction that it had.

As a result, on looks alone, I'd pick the Ford. You know it's a Focus but it looks modern, clean and upmarket. The Vauxhall isn't worth a second look and the Golf just doesn't stand out enough - although the badge alone does carry considerable respect.

It's a similar story on the inside. The Volkswagen is, predictably, very well built and extremely refined. The downside is that it just looks like any another Volkswagen and hasn't changed much since the Mk.5 Golf, released in 2004. That won't put off most buyers but it's a little disappointing, given the price you're paying. The new Beetle, and the recently announced Up, feature some neat touches that will hopefully work their way into the next generation of Golf, adding that much needed spark.

The Vauxhall's cabin, on the other hand, is much more distinctive - but it's cluttered with lots of nonsensical buttons, it's made from unpleasant-feeling materials and also rather drab. It's more interesting than the Golf's but lacks that attention to detail and effective simplicity.

The Ford's interior is basically a blend of the two - it takes the Astra's layout and modern design and applies Volkswagen's fit and finish to it. The end result is a comfortable, solid, well laid-out cabin that's surprisingly stylish and upmarket.

Despite all three being quite different, I will confess that I do prefer driving the Golf, regardless of specification. It feels lighter and more nimble, benefitting from more accurate steering, and as a result is much more engaging to drive. It is, to be frank, quite good fun.

Which one would I personally pick? The Focus, of course.

The Golf comes a close second.

The Astra? Well, it's just this car, you know. 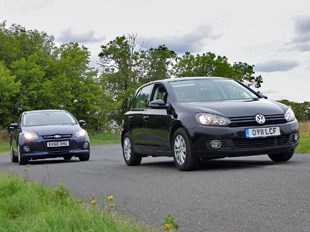 The sprightly Golf is definitely the most fun to drive. 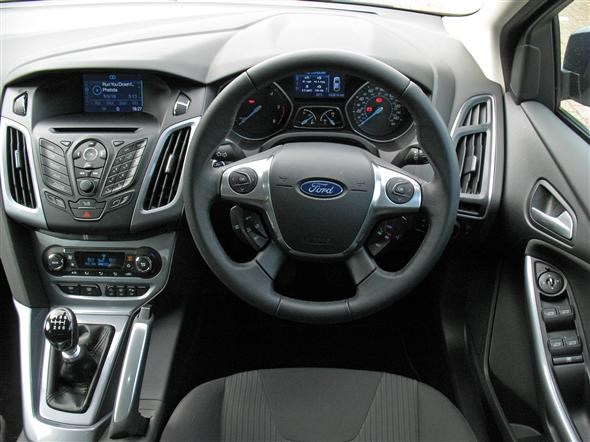 The interior in the Focus is the best out of the three. 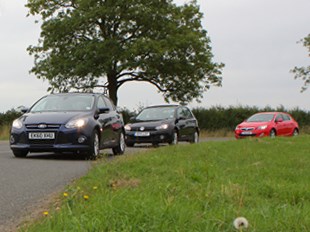 The Astra takes the bronze - it's the last one I'd pick.