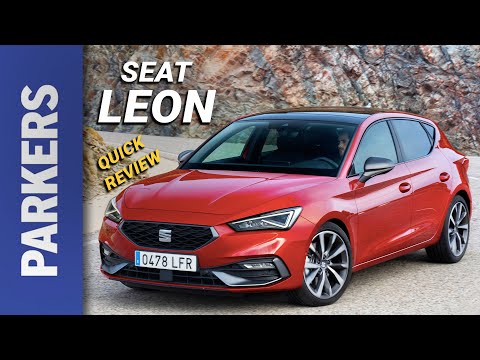 Is the SEAT Leon any good?

Now in its fourth generation, the SEAT Leon offers sharp exterior lines and a busload of new tech borrowed from the latest Volkswagen Golf at prices that comfortably undercut the popular German hatchback. This has always been the Leon's ace card, perhaps explaining why it remains SEAT's most successful model in the UK to date, with more than 250,000 sold here.

It's fair to say the new exterior is not a complete overhaul of the old car, but uses elements of the recently-launched Tarraco SUV combined with a subtle update of the existing – and very sleek – design. So, you get a sharp new front and rear end, full-width LED rear lights, and that snazzy new handwritten Leon badging at the back. It's a good-looking car.

Although the styling is predictable, the tech under the skin has been updated in line with the rest of its VW Group sister cars, the VW Golf and Skoda Octavia. Most versions come with a host of driver-assistance aids as well as a cutting-edge new digital dashboard and connected technology to sync with your phone and apps.

The minimalist-looking cabin of the 2020 Leon may have a sharp, modern design, but is actually quite sober in its choice of trim colours.

At the top of the centre console is a new 8.25-inch touchscreen infotainment system on the entry-level SE. That stretches up to a full 10.0 inches in the snazzier, higher-spec models. There are four trim levels from launch (detailed below), which are designed to suit different tastes – this goes against the increasingly popular industry approach of offering fewer models and a wider array of option packs.

In SE Dynamic models and up, you also get the new Digital Cockpit system, which has already been seen in the Golf and Audi A3. This brings a digital instrument cluster featuring a number of configurable designs in place of physical dials – and works well once you've mastered it. There's also an ambient lighting set-up that illuminates the full width of the dashboard and door tops on top-spec models.

No surprises here, other than the omission of an all-electric version, which will be covered by SEAT's forthcoming version of the Volkswagen ID.3, named El-born. The TSI petrol range on offer encompasses the eager 110hp 1.0-litre, and a 1.5-litre in 130hp and 150hp outputs. There's only one diesel - a 2.0-litre producing 115hp.

There's also a mild-hybrid petrol engine badged eTSI. This uses the more powerful petrol engine with the help of a 48-volt motor to aid efficiency, start-up and acceleration. This stores energy in a small battery pack that's harvested during braking and deceleration, but won't be capable of driving on electric power alone. It's a kind of halfway-house electric car.

A plug-in hybrid version is also available - a first for the Leon. Badged e-Hybrid, it has a 13kWh lithium-ion battery that can be charged at home via a cable to offer a claimed 40 miles of electric-only running. It's available as both a five-door hatchback and an estate.

Read more about how the SEAT Leon drives

The SEAT Leon is likely to end up on the same shopping lists as buyers considering the Ford Focus, Mazda 3, Toyota Corolla, Peugeot 308 and Renault Megane, as well as the countless small SUVs that buyers are increasingly turning to. And that's a tough crowd in which to make a significant impact – but the good news is that SEAT has created a wide range of models to tempt you.

If you're familiar with the outgoing Leon, the new model line-up has a familiar feel. From launch you can pick from SE, SE Dynamic, FR and FR First Edition trim levels. They're well equipped with even the entry-level SE throwing in keyless start, an electronic parking brake, Apple CarPlay or Android Auto connectivity for your phone, and SEAT's connected features app.

The FR is the sporting model, so you get bigger 17-inch wheels and sportier suspension, while the FR First Edition model adds keyless entry and adaptive suspension.

If you're expecting to find the flagship performance model, you'll need to look for the Cupra Leon.

Our leasing partner, ZenAuto is offering SEAT Leons from £245 per month. The usual terms and conditions apply.

Continue reading about the SEAT Leon including its practicality and how much it costs to run.