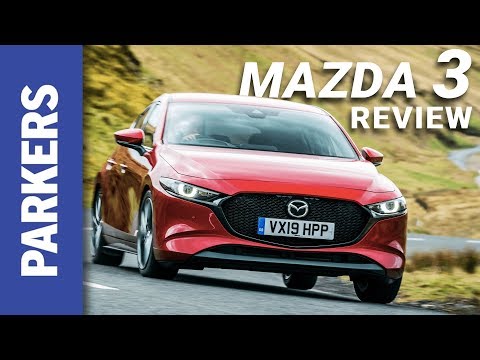 Written by Lawrence Cheung on 01 December 2020

Mazda is unapologetic about doing things differently, and with this latest generation of 3 it's remained true to form. From its range of naturally aspirated (non-turbocharged) petrol engines to its striking styling, the 3 aims to offer buyers an alternative to the usual crop of European hatchbacks.

Competing in the family hatchback sector it’s up against some tough rivals - the Ford Focus, Volkswagen Golf, Honda Civic and a competitive swathe of others. Mazda here is focusing on the driver, bucking some now industry-wide conventions in the process.

If the styling's too bold for you, there's always the four-door Mazda 3 Saloon. It's still rakish, but it only shares its bonnet and windscreen with its five-door stablemate.

Just two engines were available from launch in May 2019 – a 122hp 2.0-litre petrol (Skyactiv-G) and a 116hp 1.8-litre diesel (Skyactiv-D), which was discontinued before 2019 was over. The petrol isn’t turbocharged like most of its rivals but uses mild hybrid technology for a small pick-me-up. Given current trends, both of the 3’s engines are quite large capacity given their low total power output, but by and large the diesel feels the more eager thanks to its maximum pulling power being generated at lower engine revs. Sadly, it didn't last especially long and was withdrawn from the line-up due to slow sales.

Thankfully, an alternative was added to the range in October 2019. It's Mazda’s all-new petrol engine technology named Skyactiv-X. The engine has the tagline of providing the fuel efficiency and torque of a diesel mated with power and high-revving nature of a petrol engine - the Japanese firm's suggesting MX-5 performance with the economy of a Mazda 2.

Every Mazda 3 available in the UK is armed to the teeth with safety technology first and foremost and every one even has a head-up display as standard, as Mazda says it means less distractions for the driver. Higher-spec cars have equipment like larger 18-inch alloys, a 360-degree parking camera system and electrically adjustable front seats.

In terms of practicality, the Mazda 3 won’t win any accolades for the most space or most flexible interior. The rear seats are cramped for full-sized adults and the boot (in terms of outright volume) can be beaten by most of its significant rivals.

This trim level (pictured below) essentially acted as a range-topper of the 3 range - so it came with all the boxes ticked, plus the most powerful petrol engine, 'Snowflake White' body colour, black wheels, and a burgundy interior with white leather trim.

Click through the next few pages to read everything you need to know about the Mazda 3 including its practicality, its interior, how much it costs to run, what it's like to drive – and whether we recommend buying one.

Mazda 3 Hatchback boot with buggy inside