The Mustang is a big car on the outside, but not so much on the inside. It’s not too bad up front thanks to seats that go back a long way and plenty of width to ensure you won’t clash elbows with your front seat passenger. Headroom is adequate rather than plentiful, with high-mounted seats that don’t go as low as we’d like limiting clearance above your head.

Move to the rear and you’ll find two small seats that are best left to children and particularly short adults. You don’t have to be much over five-feet tall to find your head touching the rear screen and there’s not much leg room at the best of times. Put a tall driver behind the wheel and you’ll find what little there is all but disappears.

To state the obvious, the Mustang is only available as a two-door (we’re not counting the Mustang Mach-E electric SUV here). If you want better access to the rear seats from your coupe, you’ll need to look at the Audi A5 Sportback or BMW 4 Series Gran Coupe. 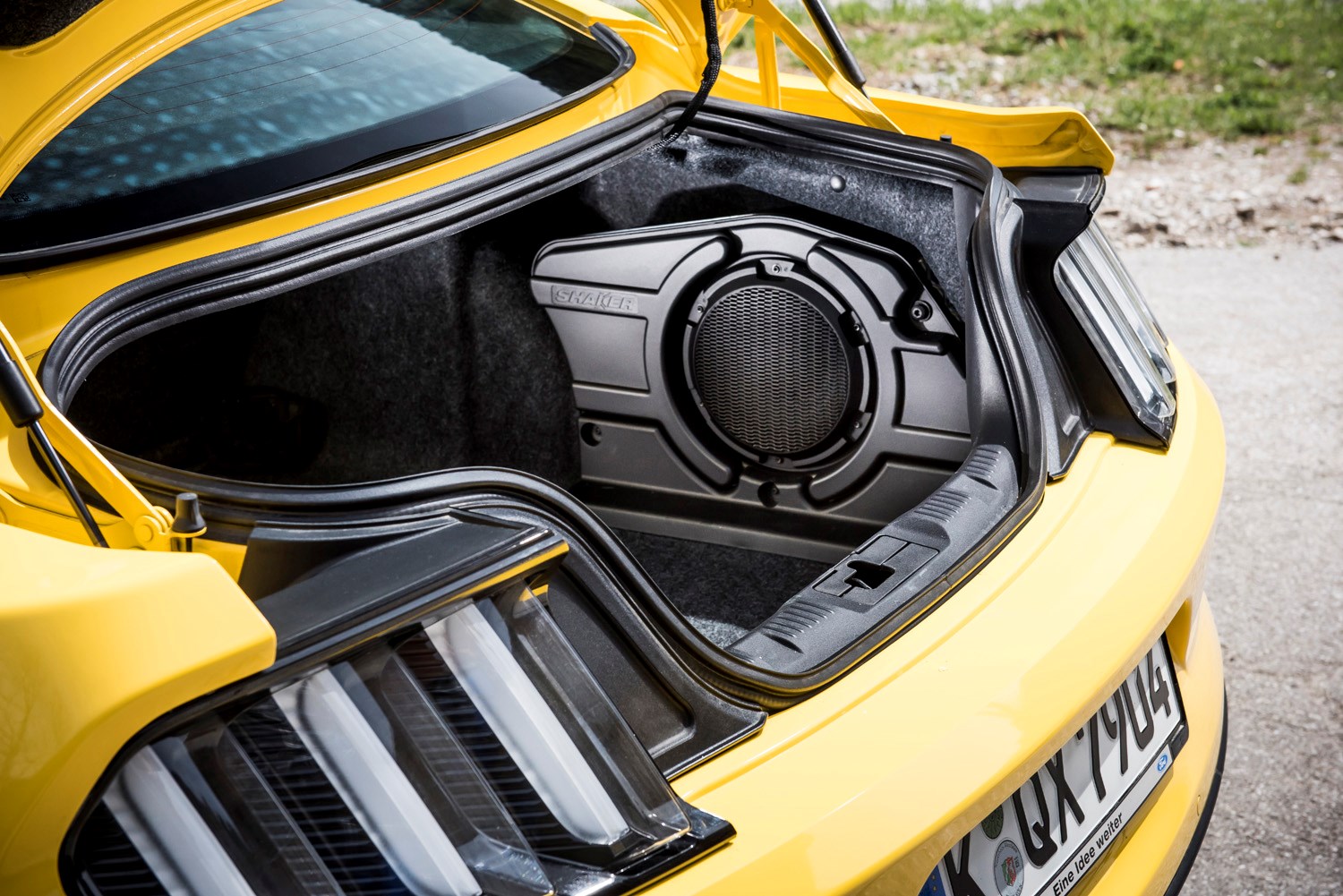 There’s ample storage space up-front with a generous lidded cubby underneath the central armrest and decent door bins for any odds and sods. Regrettably, the space in front of the gearlever isn’t quite large enough to successfully accept a typical smartphone, although the cupholders are large enough for a big phone or large takeaway drink.

At 408 litres, the boot is bigger than you’d find on many family-friendly hatchbacks. Sound good? Well, don’t get too excited as the space isn’t particularly tall and is accessed by a conventional bootlid. To be fair, that’s the same as on an Audi A5 or BMW 4 Series, although both have greater carrying capacity despite being smaller on the outside.

It’s also worth pointing out that the A5 Sportback and 4 Series Gran Coupe both combine rakish looks with bigger boots and practical hatchbacks.

The biggest issue with parking the Mustang is its sheer size. It’s not only a long car, but a wide one too. Rear parking sensors and a rear camera are standard on all models with front parking sensors a reasonably priced accessory. Unlike many rivals, a surround-view camera isn’t available.

The Mustang scored a disappointing three stars for safety in Euro NCAP crash tests back in 2017. Both the Audi A5 and BMW 4 Series are better for both helping you avoid an accident and protecting you from injury in the event of a collision.

Both rear seats come with Isofix child seat mounts, although it’s worth pointing out that the child protection scores were particularly poor and it’s a squeeze getting a bulky seat back there.

The basic equipment list includes equipment that is standard across all versions of the Ford Mustang.

The Ford Mustang was tested by Euro NCAP in 2017 and was awarded a 2 star overall rating. This overall rating is calculated from the following individual ratings: