Hyundai’s smallest car is pretty as well as pretty practical 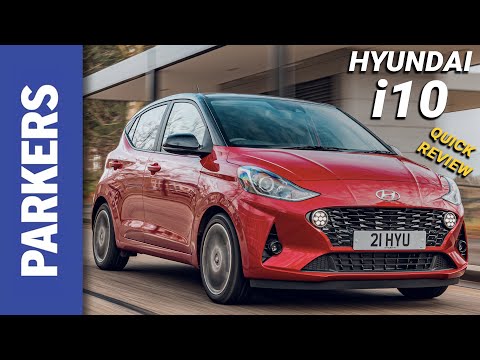 Written by Lawrence Cheung on 31 August 2021

Is the Hyundai i10 any good?

In the ever increasing SUV-focused marketplace, it's increasingly tough to market a city car like the i10.

As the name suggests, city cars are aimed at city folk who need something small enough to run rings around errant Uber drivers, while also being practical enough for occasional jaunts out of the congestion.

There is a distinct lack of city cars on the market right now. The reason? It's hard to make money on such a small car without charging astronomical prices.

They're an especially hard sell for the consumers too, as larger and more practical superminis are generally only a smidge more expensive.

The i10 may once have had more than a dozen rivals to compete with, but now, those are much smaller. First up is the Volkswagen Up - our favourite in this segment. It can also count the ever-popular Fiat 500 and Panda as rivals along with the trio of Toyota Aygo/Citroen C1/Peugeot 108 all based upon the same platform. The mechanically similar Kia Picanto is also strong competition.

So how does Hyundai make its smallest model stand out from this admittedly small crowd? By filling it with technology you’d usually find in much larger cars and adding a healthy dose of style into the bargain.

Read the Hyundai i10 verdict

You can’t really miss the new i10, as Hyundai’s made sure that this new model is every bit as eye-catching as its predecessor was anonymous.

Features such as honeycomb-shaped LED running lights in the front grille, lots of creases and bulges in the bonnet and an optional two-tone paint scheme, plus loads of bright, vibrant colours mean that this is one small car you’ll struggle to miss in a crowd.

The interior’s similarly stylish, albeit a bit more grown-up. It features one single enclosure over the dials and the infotainment screen to give it a more cohesive design, resplendent in gloss black – great for looks, though not so good for hiding fingerprints. Elsewhere, you’ll find a honeycomb pattern that effectively disguises fairly cheap plastics into looking more premium than they actually are.

Despite its tiny size, the Hyundai i10 truly offers as much practicality as many a larger supermini. There’s genuine room for four six-foot adults to travel in comfort, without suffering the bent necks and sore knees that usually accompany a drive in a small car.

There’s even a middle seatbelt on the rear bench, making it a rare five-seater – though unless you have particularly skinny friends, we’d treat it much more as a four-seater with the occasional capacity to carry a fifth passenger for short trips.

Read more about the Hyundai i10 interior

As far as transmissions go, you can opt for a five-speed manual gearbox or a five-speed automated manual. Badged as AMT, the latter is a cheap way of offering an automatic transmission – instead of replacing the whole system, Hyundai simply robotises the clutch and gearshift mechanisms.

Read more about how the Hyundai i10 drives

The range consists of SE, SE Connect, Premium and N Line. Regardless of which one you choose, Hyundai’s filled the i10 with loads of kit, some of which you might not expect on an entry-level model such as this.

As a result, you’ll find the likes of a wireless charging pad, connected navigation with real-time traffic updates and even a companion app that can remotely lock, locate and check the car’s status.

Hyundai's full-fat N division puts stonkingly quick engines in humble hatches like the i30, but N Line models are aimed at delivering the looks of the hot-hatch, without the running costs.

It acts as the sporty halo model of the range, rivalling the likes of the Kia Picanto GT-Line S or Volkswagen Up GTI.

On the outside it's distinguishable from regular i10s in the way of a bespoke N Line front grille with N Line badging, LED lamps, and three red stripes on the front. Red is racy, we suppose?

Inside it gets an N branded steering wheel and gear knob. While the suspension's been played with to make it feel more sporty.

Despite this it remains amazingly practical for a small car and should prove trouble-free to own. What’s not to like? Read the Parkers full review to find out.