Economy and efficiency in a user-friendly package 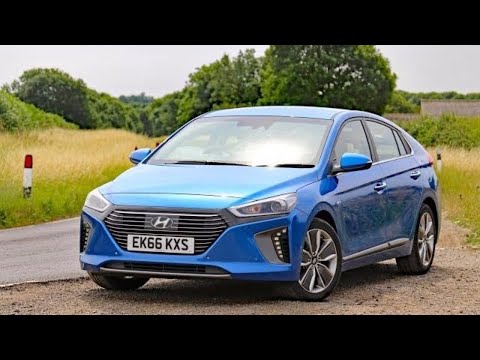 For cars such as the MINI, choice comes in the form of personalisation – colours, options, styling packs and the like. But when it comes to the Hyundai Ioniq, choice means it comes with three distinct means of power – it can be had either as a hybrid, a plug-in hybrid or a fully electric model (which we’ve covered in a separate review here).

That means that you’re able to select one of three advanced, eco-friendly powertrains based on your own budget and living situation. Regardless of which you choose, the Ioniq is priced on the more affordable end of things – undercutting its main rival, the Toyota Prius.

Like the Prius, the Ioniq has streamlined styling and a high-tech interior, but it’s more conventional all around – far easier to get to grips with and less likely to attract stares in traffic. It's part of a huge elecitrification drive for the Korean carmaker, sitting alongside the Kona Electric and Hybrid, Nexo and 48V hybrid models elsewhere in the range. This hatchback represents the affordable end of Hyundai's advanced eco-friendly vehicles.

The first Ioniq is simply badged Ioniq Hybrid – this is a non plug-in or self-charging hybrid, pairing a 1.6-litre petrol engine to a small electric motor and battery pack.

Though it is capable of travelling on electric power alone, this is only suitable for short distances – in reality, you’d be much more advised to leave the car to its own devices and allow it to select its own power source. This way, the battery and engine can manage each other in the most efficient way.

The Plug-in Hybrid model is a different matter. With a larger battery pack, it can be topped up from a charging point or mains power and driven for up to 39 miles on electric power alone. This should be sufficient to cover most people’s average mileage with ease, meaning that the plug-in model can operate as an electric car through the week and only trouble the petrol engine if a longer journey is required.

The Ioniq’s interior is the polar opposite of its main rival, the Toyota Prius. Rather than being a futuristic screen-fest, it’s more conventional and as a result easier to get along with. In fact, if you don’t look too closely at the hybrid-specific gauges and buttons, the Ioniq’s interior could easily belong to any regular petrol or diesel car in the Hyundai range.

The centre console is dominated by a large touchscreen, used to operate the majority of the car’s functions, sitting above easy-to-operate climate controls and – praise be – a conventional drive selector, rather than the stubby little nubbin you’ll find on the dashboard of a Prius.

Despite a rather sloping roofline and efficiency-optimised aerodynamic rear, there’s a good amount of space for adults in the back seats considering the size of the vehicle, and those up front will enjoy plenty of adjustability in the driving position.

The Ioniq is typically well-priced, and undercuts most of its rivals. The Ioniq Electric is cheaper than the equivalent Nissan Leaf, yet will go further on a charge, while the Hybrid and Plug-in Hybrid do the same for the equivalent Toyota Prius.

Ordering an Ioniq is simplicity itself, too. Hyundai doesn’t typically offer vast swathes of optional extras to choose from – just easy-to-understand trim levels, with plenty of equipment even on the base grade.

Running costs are, naturally, low, thanks to the hybrid powertrain. Hyundai also has an excellent reputation for reliability, backed up by an impressive five-year, unlimited-mileage warranty. This is one of the longest in the business, and very reassuring for owners.

Toyota
Prius Hatchback
4.1 out of 5 4.1
Advertisement
How much is it to insure?