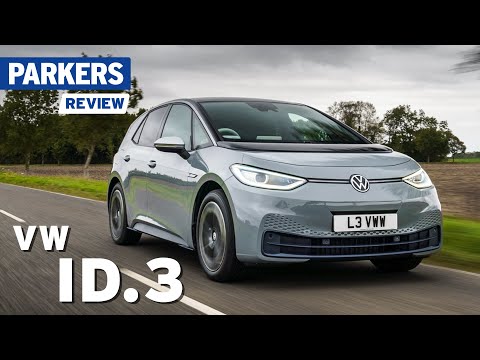 Is the Volkswagen ID.3 any good?

It needs to be, and from what we've experienced so far is that the answer's yes. The Volkswagen ID.3 is the brand's first purpose-built electric car, and represents a significant step-change in the way the company thinks about – and builds – cars. How so? VW builds it in a carbon-neutral factory and compares its importance to the original Beetle and Golf.

Its exterior design is a subtle leap from what came before – it has a familiar VW aura about it, but the detailing is sleeker and calmly futuristic. Unlocking the car at night treats onlookers to an intricate sequence of dancing LEDs in the rear lights. A small, arguably unnecessary touch, but it nevertheless adds to the ID.3's appeal.

Whether you're someone who just wants to buy an electric car and fancies the idea of one with a Volkswagen badge, or a long-time VW customer who now thinks the time is right to switch to electric power, the ID.3 is desirable, and the firm has judged this car balance of futurism and accessibility beautifully.

But, given electric cars of this size aren't exactly commonplace just now, other legitimate alternatives comprise of the smaller, more radical BMW i3, the sleek Tesla Model 3 and the value-focused Kia e-Niro. There's also the excellent Skoda Enyaq which costs barely any more but has a lot more space inside.

The interior design is starkly new and modern and this is where the ID.3 most clearly marks the departure from the previous Volkswagen way of doing things. While some of the controls are familiar from the latest models, from the way you no longer have to actively start the car (just select Drive and go) to the ID Light beneath the windscreen that serves as a form of visual communication from the car to the passengers, the ID.3 makes it obvious that it is trying to be something new.

The ID.3 takes up about as much space as a Volkswagen Golf, and does basically the same job – in that it’s a family-sized five-door hatchback with space for five inside. It is slightly wider and slightly taller but not quite as long.

However, take a look at the ID.3’s wheels. See how far out into the corners of the body they’ve been pushed? This benefits passenger space, particularly in the back, where there is a generous amount of legroom as well as plenty of headroom - it's as roomy in here as it is in the larger Passat.

There is no engine at the front at all. Instead, the ID.3’s electric motor is mounted at the back of the car, just ahead of the rear axle, driving the rear wheels. This is a big departure compared with the front-engined, front-wheel drive Golf, helping the ID.3 achieve an even weight balance across both axles and promising a tantalising extra dimension to the driving experience.

On the road, it doesn't disappoint. Your first impressions are of how easy it is to drive - you just jump in, buckle up, twist the drive selector, press the accelerator and go. It's that simple. It's easy to see out of, and is a pleasure to drive in town, where its instant, fuss-free acceleration and light steering make it a pleasure to thread through traffic.

Out of town, there's plenty of punch, with ample motorway performance, even when loaded up with passengers and luggage. The rate at which it uses up its battery is also accurately reported back thanks to its consistent distance-to-empty display - a good thing for those with range anxiety.

Read more on how the Volkswagen ID.3 drives

Starting at £28,370, the entry-level ID.3 is comfortably under the government's £35,000 cut-off for the Plug-in Car Grant. There is a wide and complex range of models to choose from, which in simple terms are broken down into battery size and motor power.

There are three battery sizes available - 45kWh (Pure Performance), 58kWh (Pro and Pro Performance) and 77kWh (Pro S) - and a trio of power outputs 145, 150 and 204hp. We'll unpick these in the performance and drive section of the review.

Trims are made up of Life, Style, Family, Max and Tour with even the entry-level Life Pure Performance model boasting a 216-mile range and 0-62mph time of 8.9 seconds. The 58kWh version, which comes with 145 or 204hp motors, is rated to 260-264 miles per charge. The range-topping 77kWh model delivers a claimed 340 miles of driving, only slightly shy of the best a Tesla Model 3 can manage.

These driving range figures are according to the latest WLTP standards, which are supposed to be better representative of real-world driving.

Charging up an ID.3 should pose no issues as it has the ability to rapid charge at up to 100kW (125kW for the top model) on all of the latest public chargepoints. That's fast enough to top-up the mid-range 58kWh battery from a 10-80% charge in 30mins.

If you're charging from a 7kW domestic wallbox, the 58kWh battery will go from empty to fully charged in less than nine hours.

Nissan
Leaf Hatchback
3.9 out of 5 3.9
Advertisement
How much is it to insure?