Ultimately the main reason for buying a car like the ix35 is the amount of room on offer and the added practicality over a regular hatchback. Until recently the most I've had to throw in the boot has been the odd bit of shopping, so being told I had to transport a bike made things a little more interesting.

This wasn't any ordinary bike either - it's an old single-speed Steyr - and there was no way of whipping a wheel off to make loading and unloading easier. After dropping the rear seats I started to load the antique in to the back and was child's play.

There was no swearing or failed attempt, and the wide aperture meant I had to spin the bike on its side and load it in - simples. The only problem I had was the grease all over my trousers. The boot opening is a good size (no baffling design or obtrusive wheelareches get in the way) and unlike some bigger cars, it's not like a reverse Tardis where it suddenly shrinks to almost nothing as you load it up.

While everything slotted in the boot with ease and plenty of room to spare, there was a small downside.The seats can be a little awkward when you need a level load bay, they don't quite go fully flat. Even though it wasn't a chore on this occassion,I can imagine it would make sliding long objects in to the car a lot more of a problem as they will catch on the lip of the rear seats.

The Hyundai has passed the Steyr bicycle load test and while there seems to be the odd niggle with the car, there are no major issues that are putting me off. Let's hope the rest of my time with the car will be trouble-free. 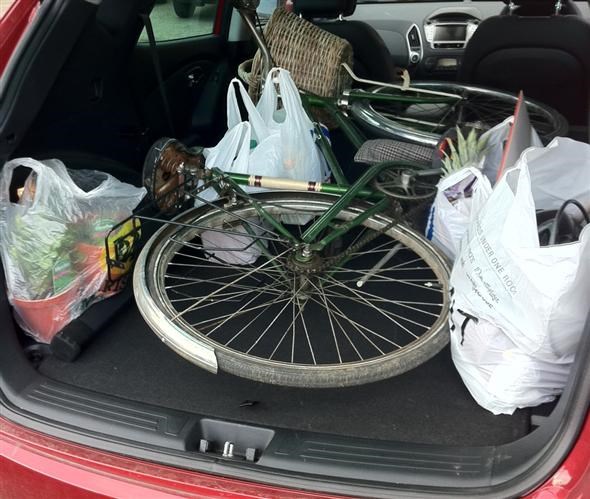