Hyundai has a go at country life

With the big Austrian bike, the amount of space the ix35 offers came under scrutiny, especially when you consider all the rest of the gubbins required for the trip. There was a large tent, sleeping bags, two airbeds, a crate full of rations (chocolate bars and bags of crisps), crate of beer, walking kit, luggage bags and even fold up chairs - this wasn't really hardcore camping as you can tell. Apart from the food crate and luggage bags, everything fitted in the boot with the seats up, and without blocking my eye line for the rear-view mirror. A good start.

After a two-hour drive to Derbyshire we got to our field - conveniently, opposite a pub. As the darkness was setting in, it was a race against time to get the tent up and organise ourselves. Like I said, this wasn't Ray Mears-like camping, and so the two 12-amp sockets in the front of the car were perfect for the electric pump to blow up the mattresses.

The next day we headed out for a nearby village and got to give the car a decent challenge as we tackled skinny gated roads and the odd steep hill. The Hyundai coped well and only on the most severe tacks and slopes did it need to be dropped down a gear. It wasn't quite as accomplished as the tractor that ascended a 45-degree gradient, but it was more than competent.

Finally, after doing a short walk and relaxing in a beer garden I'd noticed something I'd never seen before. On two different occasions, admirers walked up to the car to have a look at what it was and what the interior was like. While it had crossed my mind, it really struck me at how good looking the ix35 is. At the same time it's a rare sight on the UK roads, especially small villages in Derbyshire. Hopefully that might soon change as people see Hyundai as a genuine alternative to the mainstream options. 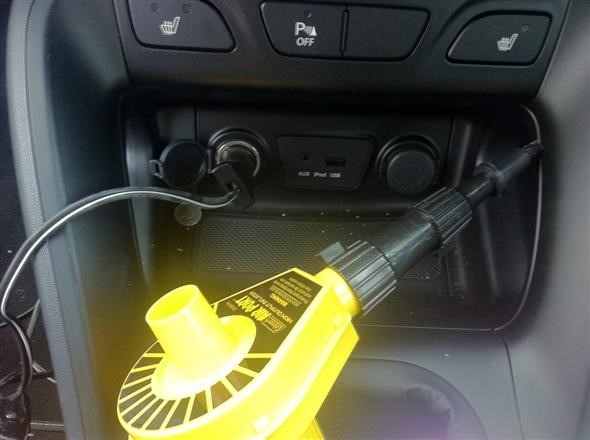