Just like its soft-top sibling, but with added roof-up refinement 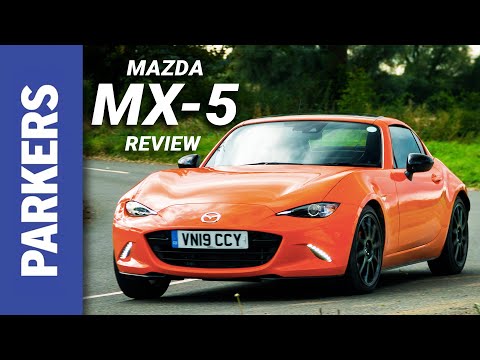 Retractable Fastback – that’s what the suffix stands for on the Mazda MX-5 RF. It swaps the regular MX-5’s manually operated soft-top hood for a motorised steel/aluminium/plastic hard-top with an unusual design – sporting distinctive targa-style fairings. It looks like no MX-5 that’s gone before.

Although it is around £2,000 more expensive than the conventional soft-top MX-5, the RF has become a unique offering with very few rivals over the years - the BMW Z4 is now a soft top and the Mercedes-Benz SLC will not be replaced. Even Abarth and Fiat’s own version of the soft-top Mazda, the turbocharged 124 Spider, is no longer available.

Mazda hopes it will attract a different cross-section of buyers, who might ordinarily be put off by the idea of a soft-top, and like the idea of an MX-5 that looks a little more ‘grown up.’

How does the roof work?

It takes 13 seconds to go from closed to open (or vice versa), by pressing a switch on the centre console. It’s quite a spectacle to watch; the ‘flying buttress’ fairings lift into the air, then the rear glass and roof panels fold themselves into a space in front of the boot, before the buttresses return to their original position.

The result is a car that doesn’t feel as open and exposed to the elements as the fully convertible soft-top MX-5, but still allows plenty of open air into the cabin. With the roof up it’s much quieter on the motorway.

It's certainly less turbulent inside the cabin as you are better shielded by the added structure behind you, but the downside is a far greater level of wind noise when the roof is open; there’s an annoying, resonant buffeting at speeds above 55mph, as the wind hits the front of the buttress head on. This means you’ll need to raise your voice to continue a conversation with a passenger.

There’s no difference in boot space between the MX-5 soft-top and RF models, with a reasonable amount of space inside for two large bags (maybe three at a push), but a narrow aperture to manoeuvre them through.

Like the soft-top MX-5, two four-cylinder petrol engines are available: a 1.5- and a 2.0-litre, with 132hp and 184hp respectively. An update in late 2018 uprated the performance figures from the previous 131hp and 160hp versions available.

Both come with an excellent, fun-to-use six-speed manual gearbox as standard. However, the MX-5 RF also introduces the option of an auto transmission, available with the 2.0-litre engine only in top two Sport Tech and GT Sport Tech trim levels. There are currently no plans to introduce an auto MX-5 soft-top in the UK, so if you’re searching for a brand-new MX-5 automatic then the 2.0-litre RF model is your only choice.

Click through the next few pages to read everything you need to know about the Mazda MX-5 RF, including its practicality (below), comfort, how much it costs to run, what it's like to drive – and whether we recommend buying one.