Getting the heads up

One of the new technologies spreading into mainstream cars is the head-up display.

As far as I'm concerned it is a great piece of safety kit because rather than taking your eyes off the road to look down at speedo readings, you get a good clear numeral reading on the windscreen.

I realised how much I rely on it when approaching a fixed speed camera. I glanced down to check my speed but the display panel wasn't deployed so I couldn't see the speed figures. Trying to check the speedo wasn't as straight-forward so by the time I realised how fast I was actually travelling I had already sailed by the yellow top box (no need to panic - I was doing less than 30mph).

So the head-up display works and is useful for watching your speed. Peugeot also has another trick with its display - the distance alert. You can set a safe gap between you and the car in front measured in seconds. Get too close and the head-up display pops up a warning triangle with an exclamation mark in the middle of it.

At first I thought this system was tied into the cruise control so that when you got closer than the gap you specified the cruise control would slow you until the gap is restored. Sadly, no such luck - the system is what it says it is - a warning. Thing is I can see the distance to the car in front a lot easier than watching the distance warning flag up on the head-up display.

It's not a problem but if the distance warning system was tied into the cruise control then it would be not only extremely useful but also a great safety device. 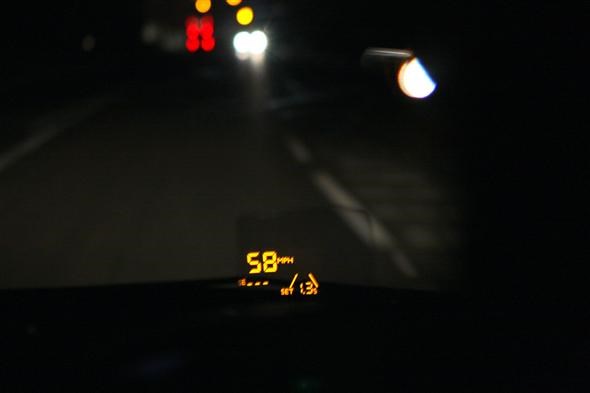