Peugeot proves it can get a grip

The winter weather has clobbed the country and even the hardest of drivers with the most robust of 4x4s will venture cautiously into the snowy landscapes where there once used to be roads.

In Cambridgeshire we have escaped most of the icy blast but roads are still treacherous especially on the unsalted back lanes. To provide a soothing balm to worried drivers Peugeot has a ‘Grip Control' feature fitted to the 3008 along with snow and mud tyres.

Let's be clear it isn't a four-wheel-drive system - it's an electronic system designed to ensure the front-wheel drive gets the best traction. In the battle for grip, the Peugeot's other weapon is the Michelin mud and snow tyres.

Selecting snow mode sets the electronic stability programme (ESP) to ensure the power goes to the wheel with the most traction when pulling away. If the front wheel spins the ESP steps in to cut power to allow the wheel to grip again, then the power can be applied again.

A quick test in an icy, snowy car park with snow mode selected revealed it was impossible to get a sustained wheelspin even with deliberate provocation. The ESP simply cuts in, restores grip and the car pulls away. Impressive stuff.

As a control test I tried pulling away with the ESP switched off - cue loads of wheel spin and very little forward motion. So it does work. Interestingly, Peugeot does say that the snow mode works up to 31mph so it is a system designed to get and keep the car moving in low-speed, low-grip situations, which is exactly what you get with snowy, icy roads.

Ok, ultimately it can't beat the effectiveness of four-wheel drive, but this system does deliver better grip over conventional two-wheel-drive systems and doesn't have the weight penalty of an all-wheel drive set-up. Certainly, in this weather I'm glad the 3008 has the grip control than not. 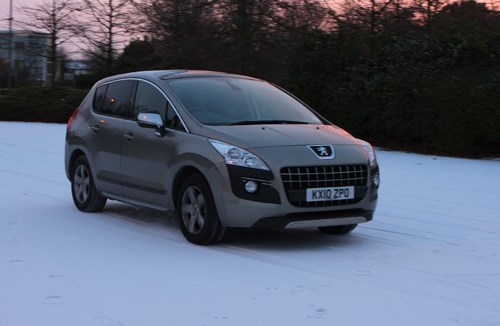