Buying used brings almost unlimited choices if you're looking to buy one of many Skoda Rapid cars for sale. You can click the links below to search through a wide range of cars for sale across the UK. As well as that, you can use our search tools to tailor your results based on price, location, engine and trim – depending on your own personal preferences. With Parkers, you'll be able to find the right used car at the right price for you.

Rapid majors on space and value for money

What is the Skoda Rapid?

Few cars are named as inappropriately as the Skoda Rapid, for it’s not a high-performance car, but more recently a range of value-orientated family hatchbacks. At least earlier generations of models wearing of the badge were a little more convincing.

During 2019 the Rapid went off sale, its place in Skoda’s range being taken by the all-new Scala. Competitors for the Rapid included the virtually identical SEAT Toledo, as well as value-focused alternatives such as the Citroen C4 Cactus, Fiat Tipo, Hyundai i30 and Kia Ceed.

Which versions of the Skoda Rapid were produced?

Skoda’s most recent Rapid family was sold in the UK in two bodystyles, although both were spacious five-door cars.

First to arrive in 2012 was the Skoda Rapid Hatchback, a sister car to the most recent SEAT Toledo, which differed only in the badges, grille and light designs. These were longer overall, with an extended rear end, rather like the larger Octavia, making it the body to choose if you wanted the most boot space.

Two years later came the Rapid Spaceback, which was less practical, despite the name implying otherwise. There was no SEAT equivalent to the Spaceback, which was shorter and had a pert tail more like its rivals. One of the options included an extended glass pack making the deeper tailgate window look like a glazed extension of the roof. A further iteration, the Rapid Scout, didn’t come to the UK. This was based on the Spaceback’s body, but with an elevated ride height and chunkier plastic mouldings for a pseudo-SUV look.

Power by a range of modest petrol and diesel engines, the Rapid’s value-centric theme extended to ensuring that all versions are cost-effective to run. Manual gearboxes are fitted to most, but DSG twin-clutch automatics were also available. All Rapids are front-wheel drive.

Using the underpinnings of the SEAT Ibiza, Skoda Fabia and Volkswagen Polo as a base, but stretched to accommodate the longer Rapid bodywork, both it and the Toledo use a platform called A05+. They’re the only European models to use it – all other cars based on the same architecture are China-only vehicles. 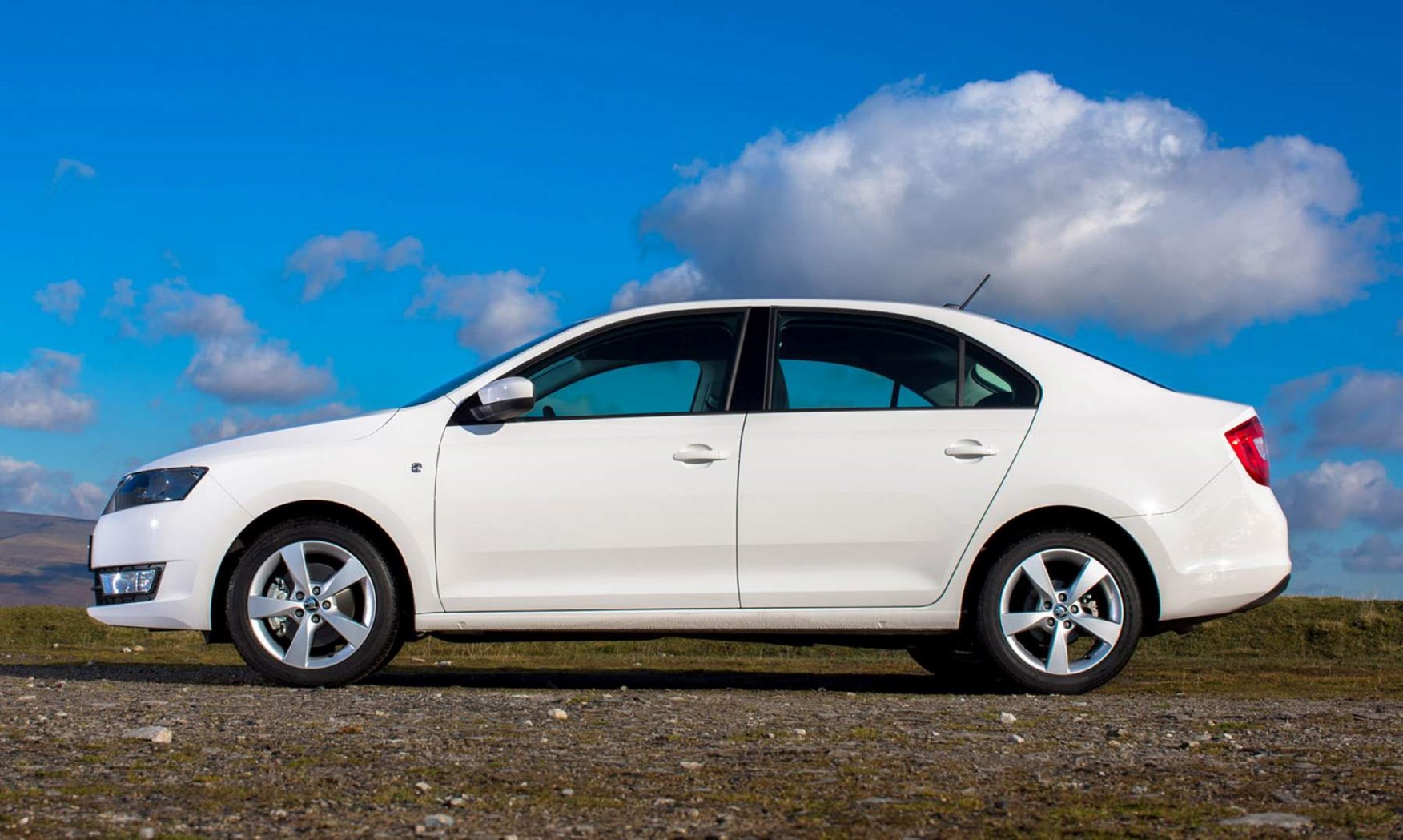 It’s less sophisticated – and consequently cheaper to produce – than the MQB architecture shared with the Golf and its siblings, which suits the Rapid’s value-focused mantra. It shows up in other areas, too – although the interior looks rather like the larger Octavia’s, it’s made of lower-grade, harder plastics, but it’s well-assembled.

Similarly, the exterior looks like a contemporary Skoda, but there are no surprise-and-delight features, with relatively simple styling and body panels that lack too much complexity, which would make them costlier to produce.

It’s not at all bad, so if you’ve a notion that a budget car is going to be abysmal to drive, then it’s time to rethink your mindset. Let’s be clear – it’s hardly exciting, but it’s competent, has light, vice-free steering and thanks to a relatively long wheelbase and sensibly judged damping, it rides comfortably too, not transmitting much of the road surface harshness to its occupants posteriors. 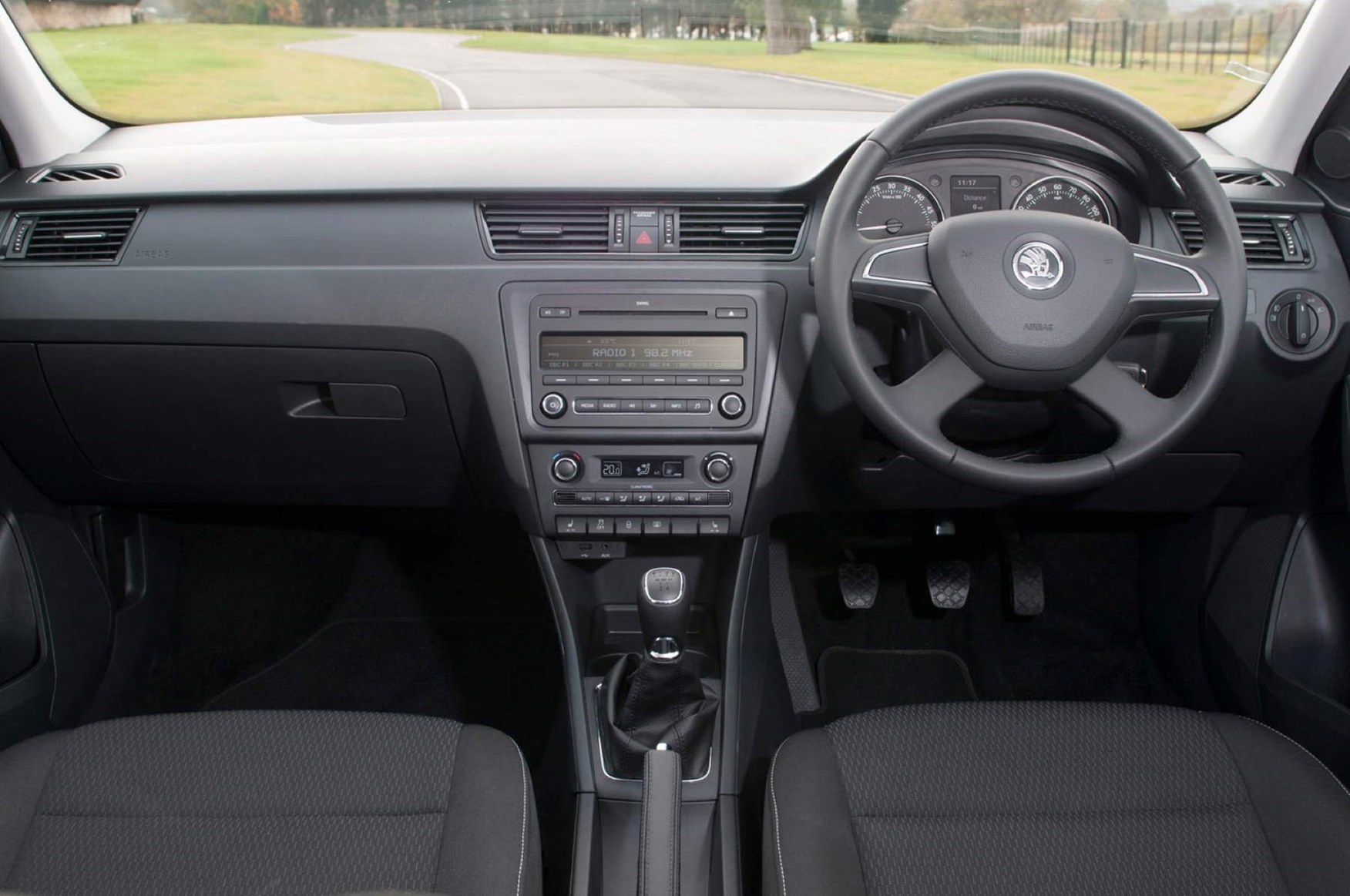 One thing that is certain is that Rapid drivers are unlikely to be overcome by its power reserves: the punchiest models in the range only muster 115hp.

How much does the Skoda Rapid cost?

Not exactly cheap, but the Rapid is a very good value proposition and will particularly appeal to those with nostalgic views of Skodas from years gone by.

Whether buying one outright or using a finance arrangement such as a PCH or PCP, the outlay to drive a spacious family car will be significantly less than almost all of the Rapid’s immediate rivals. The Scala that replaces it is a step-up in costliness.

Find out what Skoda Rapid drivers think of their cars with our comprehensive owners’ reviews.

Skoda Rapid models for sale
Back to top
Sign up to receive the PARKERS newsletters and receive: