Excellent EV that still leads in terms of range and usability 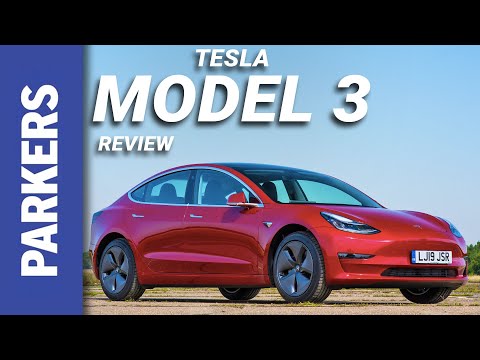 Is the Tesla Model 3 any good?

The Tesla Model 3 has made quite an impact and is now a common sight on our roads as the take up of Electric Vehicles (EV) really accelerates. It brings Tesla's amazing technology to a more affordable end of the market, even topping the UK Top 10 bestseller's list a few times in the process.

From our experience so far, the Model 3 has all the qualities to tempt you out of your conventional executive cars, and into the world of EV ownership, as long as your lifestyle supports it – and that's why it won the overall car of the year title in the 2020 Parkers New Car Awards.

Tesla isn't really looking at other electric cars as opposition for the Model 3, but more established medium-sized premium saloons such as the BMW 3 Series, Mercedes-Benz C-Class and the Audi A4. However, we's say that the Polestar 2, Hyundai Ioniq 5 and Kia EV6 are all going to be on the same shopping lists.

The interior is dominated the a landscape-format centrally-mounted 15-inch touchscreen, with no instrumentation at all in front of the driver. Just about everything is adjusted from the touchscreen or steering wheel controls – but as worrying as that sounds, thanks to Tesla's great operating system and large screen, it's all a cinch to use.

The driving position is excellent, too, with a large windscreen and low-mounted dashboard giving the driver unrivalled forward visibility. The rear-seat accommodation isn't exactly generous, which is a disappointment, given the Model S's huge interior, and shared benefits of that compact electric drivetrain.

Head- and legroom are acceptable, but the rear bench is too narrow for three adults. The good news is that the floor is flat, as there's no exhaust or propshaft to accommodate under the car.

Tesla claims a 0-60mph for all models between 3.1 and 5.3 seconds, and it's this accessable and effortless speed dominates your initial impressions of the car. Maximum speed is quoted as between 140- 162mph, but high-speed motorway cruising kills this car's range, as well as battery life.

As for handling, when pushed hard, the Model 3 has impressive directional stability, and is blessed with flat cornering and tenacious grip. The good news is that if you don't make use of all of that performance, you can expect a decent range that's not far off the official WLTP claims for this car.

The pay off is that the ride quality isn't exactly impressive. Especially in skinny-tyred Performance form, the Model 3 displays a jittery ride on some road surfaces that is felt through the wheel as well as the seats. This is no doubt a side-effect of not offering adjustable dampers or air suspension.

Read more on how the Tesla Model 3 drives

The Model 3 has a refreshingly simple line-up – you can buy it in Standard Range Plus (278-mile range), Long Range (360 miles) and Performance (352 miles) forms with a limited set of options and configurations. The main add-ons are around its self-driving capability, although Basic Autopilot comes with all models.

Other standard features are over the air updates for its operating system, Sentry Mode – security system that activates the cameras if the car is disturbed while it's locked – is included, as is the excellent Tesla mobile app.

The Model 3's entry-level point is just over £40,000 for the Standard Range Plus, rising to just under £60,000 for the Performance model via the Long Range version. Despite only being on sale since 2018, it's already been mildly updated, with a series of tweaks for 2021 to keep it at the top of a very competitive sector of the market.

As well as costing less than rival petrol and diesel cars to fuel, the Tesla is as painless as it comes for a BEV to charge up. Like all of its rivals, charging using a three-point domestic plug is okay for emergencies, but it's slow and inefficient. Most owners will install their own fast charger at home and that will be sufficient for most needs.

There's also Tesla's Supercharger network, which takes about 40 minutes to replenish (from 20 to 80%), and is expanding all the time. Compared with other public chargers, the Supercharger offers a premium ownership experience – as long as you're not going out of your way to top up – although the free charging offered to Tesla customers only extends to Model S and Model X cars.

In use, a Tesla Model 3 shouldn't offer up too many anxieties around its range. When the battery runs low, the sat-nav automatically diverts the car to the nearest available charger. Travel information and advice are relayed exclusively by the big touchscreen.

Tesla is pricing the Model 3 aggressively and selling it online with a number of contact-free options. You can configure your car, take advice and place an order, with many users choosing to complete the process online and never actually visit a dealer. Tesla is offering the car via Personal Contract Purchase and Hire Purchase deals.

Via Tesla, a Standard Range Plus version will cost close to £500 per month of a PCP deal, or around £350 per month on a leasing deal. Long Range models and are typically £100 - 200 per month more.

Our leasing partner, ZenAuto offers the Model 3 from £438 and that places it right in the heart of the BMW 3 Series, Audi A4 and Mercedes-Benz C-Class market.

Click through the next few pages to read everything you need to know about the Tesla Model 3 including its practicality, how much it costs to run, what it's like to drive – and whether we recommend buying one.

Tesla Model 3 from above