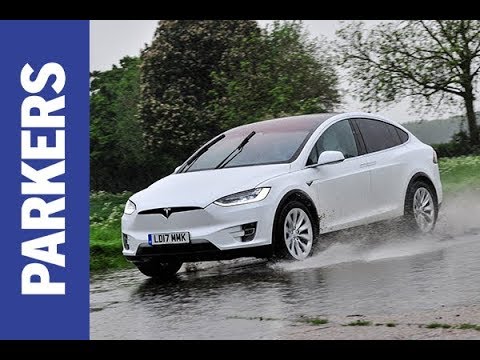 Launched in 2016, the Tesla Model X was an novel addition to the range, following on from the original Lotus-based Roadster and the svelte Model S. Built in California, the Model X emerged as the world’s first all-electric SUV, even if it looks about as much like a Sport Utility Vehicle as it does a large, ocean-dwelling mammal.

But like all Teslas, it achieves the seemingly contradictory goals of zero exhaust emissions and very high performance, with the additional benefits of seven-seat practicality, and a huge and adaptable passenger compartment. And these qualities make it a unique proposition, years on from its launch.

Other Model X USPs include an enormous 17-inch central touchscreen and electrically activated Falcon Wing rear doors. To see them in action, check out our video above. Tesla also pioneered advanced semi-autonomous driving aids, and although the best of the opposition is catching up fast, Tesla’s system should be praised for being easy to use and relatively natural in feel.

Since the 2019 model updates there are two versions of the Model X are available, named Long Range and Performance. Previously the line-up comprised of confusing alphanumerics such as 75D, 90D and 100D and P100D. The higher the number, the greater the performance and/or the longer the driving range – see the Performance section for a full explanation. All are swift, interesting, and well stocked with technology.

The Tesla Model X has few direct rivals, but 2019 saw a slew of new premium EVs go on sale. Like the Model X, they’re SUV-shaped, but they’re also smaller than the Tesla – so, your choice will include the Audi E-Tron and Mercedes-Benz EQC, as well as the sportier Jaguar I-Pace.

The Jaguar and Tesla are less conventional looking than their German rivals, which appear to have designed all-new EVs with rather generic SUV styling, despite impressive under-the-skin technology.

Designed around the battery pack

The Model X’s large battery pack sits low down between the front and rear axles, and powers an electric motor at either end of the car to provide all-wheel drive. Despite producing zero exhaust emissions, the Model X has performance to rival sports cars and, in some cases, even supercars – the Performance version is claimed to accelerate from 0-60mph in 2.9 seconds, beating the Ferrari 488 GTB by a tenth of a second.

Tesla does not market the Model X as an all-terrain vehicle, but has engineered it to tow up to 2,268kg when equipped with the tow-bar option. As we say, it’s not really an SUV in the conventional sense of the word – but marketing it as an MPV (a now unfashionable concept) would be a bad commercial decision.

The absence of a conventional engine and gearbox allows for a completely flat floor inside the vehicle, with no bulky transmission tunnel to consume foot space. Stowage space for luggage is also available in both the boot and under the front bonnet, and the Tesla can be specified in standard five-seat or optional six- or seven-seat layouts.

The majority of Model X (and Model S) customers follow Tesla’s recommendation of buying a dedicated Wall Connector for home recharging, at an approximate cost of £400-£440. Typically this provides between 22 and 51 miles of driving range per hour of charge, depending on power grid supply, but usually sufficient to replenish the batteries when hooked-up overnight.

For journeys further afield, a network of Tesla Supercharger stations are easily navigated to via the touchscreen multimedia system. All Tesla Model Xs now come with free Supercharging for life. At first, Supercharging was free for all, then it restricted users to 400kWh each year before charging users from November 2018, before being free again for new customers in summer 2019. Owners of cars bought between those will still have to pay as they go, unfortunately

Alongside the growing infrastructure, Tesla has revealed plans for third-generation V3 Supercharging, a new type of facility that could see charging times reduced by an average of 50%.

Tesla claims approximately 170 miles of range is recharged in as little as 30 minutes using its Superchargers. Various factors can affect the exact time to charge, but we plugged the Model X into a Supercharger station and received 180 miles of extra range in an hour.

Tesla’s website lists 35 UK Supercharger sites, with between two and 12 charging points each. They are still an object-lesson in usability, as they’re fast, clean and simple to use – a true premium experience. The Model X can also be used on slower conventional chargepoints, which can also be found at other sites including hotels, restaurants and shopping centres.

Mercedes-Benz
EQC SUV
4 out of 5 4.0
Advertisement
How much is it to insure?