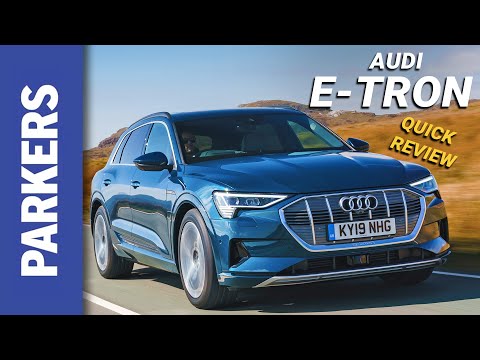 The Audi E-Tron is the first production battery electric vehicle (BEV) from Audi, arriving on the market in the form of an SUV. It may not be the first, but comes up against a small handful of rivals such as the Jaguar I-Pace, Mercedes-Benz EQC and Tesla Model X.

But that’s only if you stick with electric vehicles, as many buyers may also consider plug-in hybrid (PHEV) alternatives such as the much larger BMW X5, Volvo XC90, Mercedes-Benz GLE and Porsche Cayenne.

The E-Tron is built in Belgium riding on an entirely new, dedicated electric vehicle platform that in size slots between the current Q5 and Q7 models. It was followed by Sportback and E-Tron GT four-door coupe versions on the same underpinnings in 2020.

Why has Audi called it E-Tron?

Logic would have suggested that Q6 would have made more sense as a model name, especially as Audi has already confirmed it intends to launch a Q4 in the future and already has a Q8 at the top of the range.

Also, E-Tron is an already familiar derivative name to distinguish the PHEV versions of the A3 Sportback and Q7. Audi’s management decided that by calling its first battery electric vehicle (BEV) without a combustion engine E-Tron, it will act as a recognisable halo model for other electrified cars within its range.

The German marque has successfully implemented this strategy before: almost four decades ago it launched the Quattro sports car, with the name then subsequently applied to all four-wheel drive versions of other Audis.

Completing this circle, the E-Tron SUV also wears Quattro badges, highlighting that all four of its wheels are driven.

There are two versions available: the entry-level model, badged ’50’, and the higher-powered ’55’ version which was available from launch.

High-tech interior, just like the rest of the range

As it’s an Audi that happens to be electric, the interior of the E-Tron is very familiar. Large screens dominate the dashboard, while there’s the Virtual Cockpit setup ahead of the driver. It’s a little more angular than something like a Q7 or Q8 inside, with just a couple of nods to the car’s more advanced powertrain.

To select drive, reverse of neutral, you nudge a small lever protruding out the side of a leather rest by the lower screen, and a huge storage area between the seats adds to the car’s practicality credentials.

As an industry production first the conventional door mirrors are replaced by OLEV screens situated in the door. They’re optional, and only offered in countries where the law permits them.

It’s very evidently an Audi stylistically, so the E-Tron’s looks will immediately make it feel familiar, even if electric propulsion is a wholly new experience.

Overall the E-Tron’s a safe family SUV in which to travel having gained a full five-star Euro NCAP crash test rating when tested in spring 2019.

Does the Audi E-Tron offer something different in the SUV sector? Click through the next few pages to read everything you need to know, including its practicality (below), comfort, how much it costs to run, what it’s like to drive – and whether we recommend buying one.

Audi E-Tron side profile in red

The tiny door mirrors on the Audi E-Tron SUV