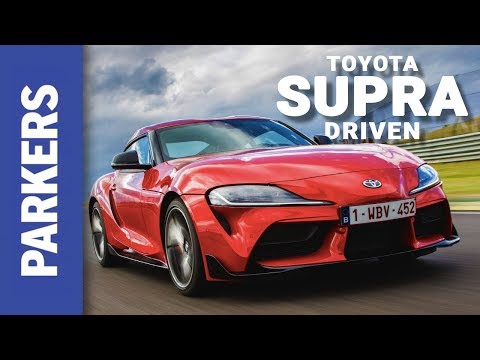 Written by Lawrence Cheung on 13 October 2021

A striking-looking rear-wheel drive coupe, the fifth-generation Toyota GR Supra marks the revival of a cultish sports car name last seen more 20 years ago on the UK market. Much has changed in the intervening years, with today’s car built in tandem with BMW and its Z4 Roadster. As such, the Supra’s platform, engine and cabin are similar to the two-seater BMW soft-top.

Built to rival the likes of BMW’s M2 Coupe, the Alpine A110 and Porsche’s benchmark 718 Cayman, the Supra relies on a more traditional front engine, rear-wheel drive layout. Toyota’s goal while building the car was to create a sports car that – above all – is entertaining to drive, yet still usable enough for owners (who don’t need more than two seats) to enjoy every day.

Has it been successful? Read on to find out.

The Supra – and the BMW Z4 it's closely related to – use a shared platform, albeit one that is dominated by BMW technology thanks to the shared engines, much of the suspension and a substantial amount of the electronics and driver environment. Given how many cars are a collection of technologies from third-party suppliers, this shouldn't dissuade serious Toyota fans at all.

The differences are rather significant, too - the Toyota GR Supra is a fixed-roof coupe, with a short wheelbase and sharp, responsive steering. It follows the styling direction of the GT86, in that it has a double-bubble roof, with all cars getting the distinctive ducktail wing on the rear. Of more importance, the body has improved rigidity over its BMW counterpart, surpassing the figures for even the carbonfibre Lexus LF-A.

How does the Toyota GR Supra drive?

You can read more in the Engines section of the review, but here's the basic summary: if you're expecting something akin to a Toyota GT86, but faster, then you're going to be surprised. It's far more of a GT car than that. In classic terms, the Supra began as a luxury Celica with a larger engine, after all. It didn't end as that, though - and although Toyota have resurrected a name, they've left the past well alone otherwise, making this generation both revolutionary and evolutionary in approach.

Revolutionary, because the technology underneath is science fiction compared to the last Supra; evolutionary, because the famous A80 of 1993-1996 (in the UK, at least, though it was on sale until 2002 in Japan, with many later cars shipped over as grey imports) had already moved from luxurious GT to a harder-edged, high-performance ethos thanks to countless enthusiasts modifying their cars for more power.

There's a 2.0-litre entry-level engine providing plenty of performance, but Supra fans will at least raise a smile at the 3.0-litre straight-six - it's as true to the Supra's DNA as you could wish for, even if it's a motor also found in the BMW M240i. The rest of the drivetrain follows suit, with a variable-ratio active differential, eight-speed gearbox and adaptive suspension. Toyota's setup is bespoke, and the front anti-roll bar geometry, suspension tuning and crucially, steering, are all developed specifically for the Supra.

Toyota has retained many of the GT86's most appealing elements in the Supra. Set well back in the wheelbase, the front-engine layout doesn't result in a nose heavy attitude; rather, the Supra responds eagerly, turning on its axis at the driver's command. Flick through the gears with the (BMW-sourced) paddleshifters, and the impressive torque available ensures there's little that the Toyota will be unable to overtake - or challenge on the track.

But does the Supra manage to stave off its super-competitive rivals from Porsche or Alpine, or does its more GT-style dynamics make it even more appealing for day-to-day drivers?