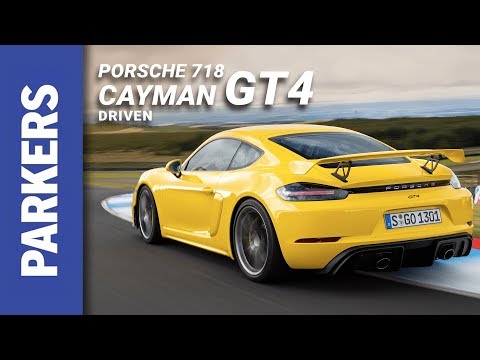 Written by Lawrence Cheung on 15 September 2021

Describing the Porsche Cayman as the company’s cheapest sports car could be a little misleading. No Porsche is really entry-level, such is the level of performance on offer. But, the 718 Cayman is, technically, the German brand’s cheapest model on offer (with one or two caveats).

Previously known as the just the Cayman, it became the 718 Cayman when it and the convertible Boxster were updated to come fitted with four-cylinder engines instead of more traditional six-cylinder ones that powered Porsches for years and years beforehand.

As the 718 Cayman covers such a broad spectrum of abilities performance-wise, rivals range from the higher end of the Audi TT range to the Jaguar F-Type and Alpine A110. Is it good enough to cover all these bases and be the best performance car for the widest range of buyers?

It may sit low to the ground and only have two seats, but the Cayman is much more usable every day than you might expect it to be.

On many models, the ride isn’t as firm and jarring as you might think, while space inside is plentiful for two people, it just takes a bit of effort getting in and out.

There’s a small boot in the rear (125 litres) and some space in the front under the ‘bonnet’ with 150 litres thanks to the mid-engine layout. Overall, that’s more than you’d get in some city cars and superminis, it’s just not all in one place.

There's a range of smaller capacity, turbocharged petrol engines, rising up to a flagship 4.0-litre, naturally-aspirated unit. All are available with the choice of a manual or automatic transmission (Porsche calls the auto PDK).

What trim levels are there?

When it was first launched in 2016, it came in two forms: 718 Cayman and 718 Cayman S. Easy. Since then, the range has expanded to include the Cayman T, GTS 4.0 and the GT4. Not so easy, especially as the controversial move to just four-cylinder engines was changed with the inclusion of more powerful six-cylinder units in those higher up the range. Arguably, the GT4 steps on the toes of some 911 models, in terms of performance and price.

As is the case with most Porsches, a lot of equipment that you’d expect to be fitted as standard costs extra. While the basics are there, things like parking sensors, automatic wipers and cruise control all cost extra. If it’s a car you’ll be using everyday, you could end up adding the price significantly.

Similarly, if you do want a fully-loaded Cayman, the price gets eye-wateringly pricey. And while the interior is high-quality and impressive ergonomically, it now looks and feels a little dated next to latest versions of the 911 and Macan with their big screens and touch-sensitive areas on the centre console.

Still, none of that is likely to put people off, as the Cayman is a very rewarding car to drive. You don’t always need the distractions of gadgets and gizmos.

Read on to find out more about the Porsche 718 Cayman.

Jaguar
F-Type Coupe
4 out of 5 4.0
Advertisement
How much is it to insure?