For info on the driving experience, engines, interior, standard equipment and value, see our main Transit Custom review page instead.

Load capacity and ease of loading remain two of the most important factors when it comes to purchasing a new van. The Ford Transit Custom excels in both areas.

For example, at the time of its launch in 2012, the short-wheelbase (L1) model was the only vehicle of its type that could swallow three Euro pallets loaded to 1.0 metre in height.

Its maximum payload ratings are among the best in the medium van sector, too.

All versions of the Transit Custom come with a large sliding door on the passenger side, with the option to add a second on the opposite side.

The rear doors open wide, the load area is well shaped with few intrusions, and all panel vans include a metal bulkhead with a load-through hatch for longer items such as pipes and planks as standard. 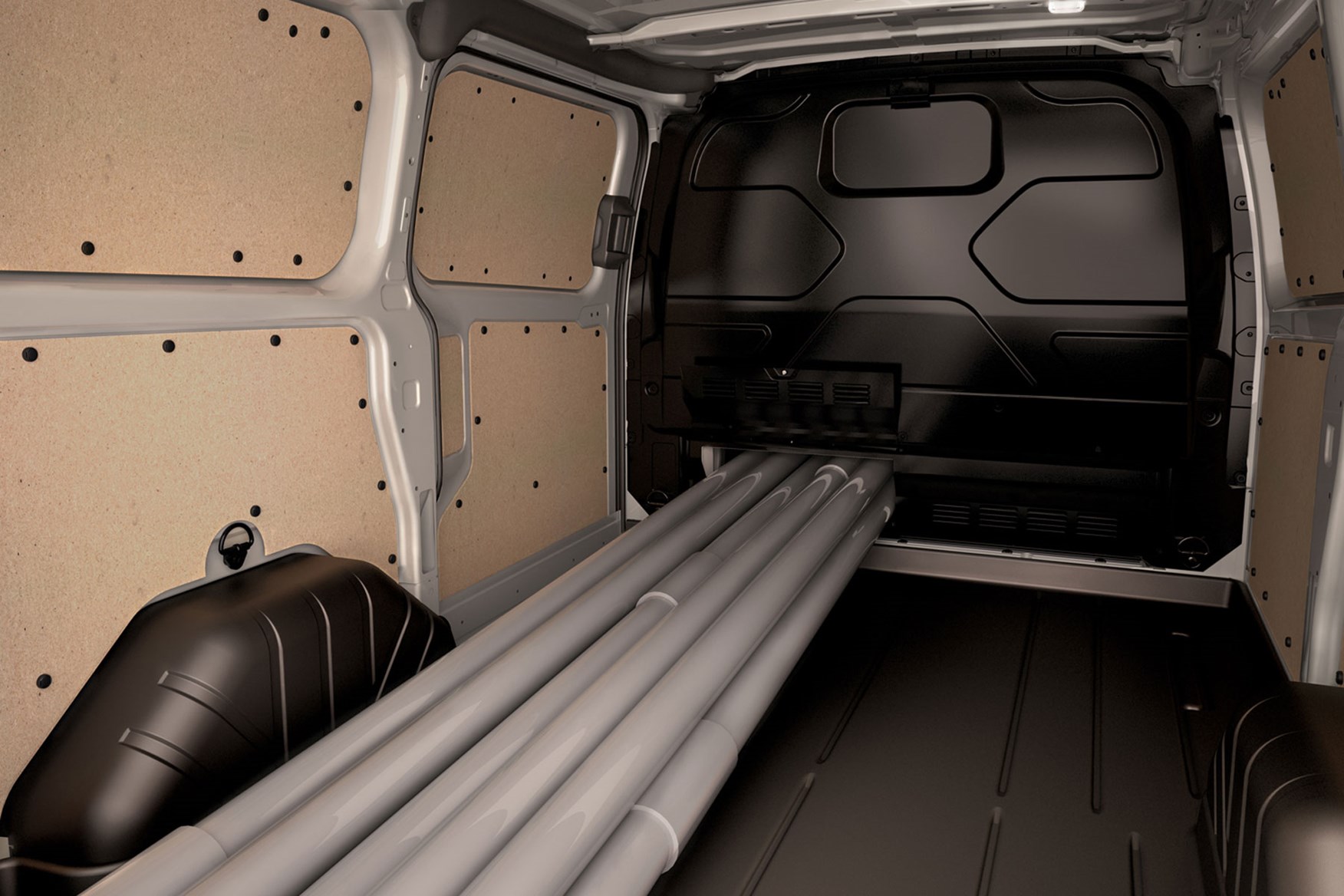 Floor-mounted tie-down lashing points are also fitted as standard, while neat options include a fold-flat roof rack, which can carry up to 130kg but stows when not needed to reduce air resistance and improve fuel economy.

Short-wheelbase (SWB) Transit Customs are labelled L1, and have a distance of 2,933mm between the front and rear axles. It looks like this (in pre-2018 facelift guise): 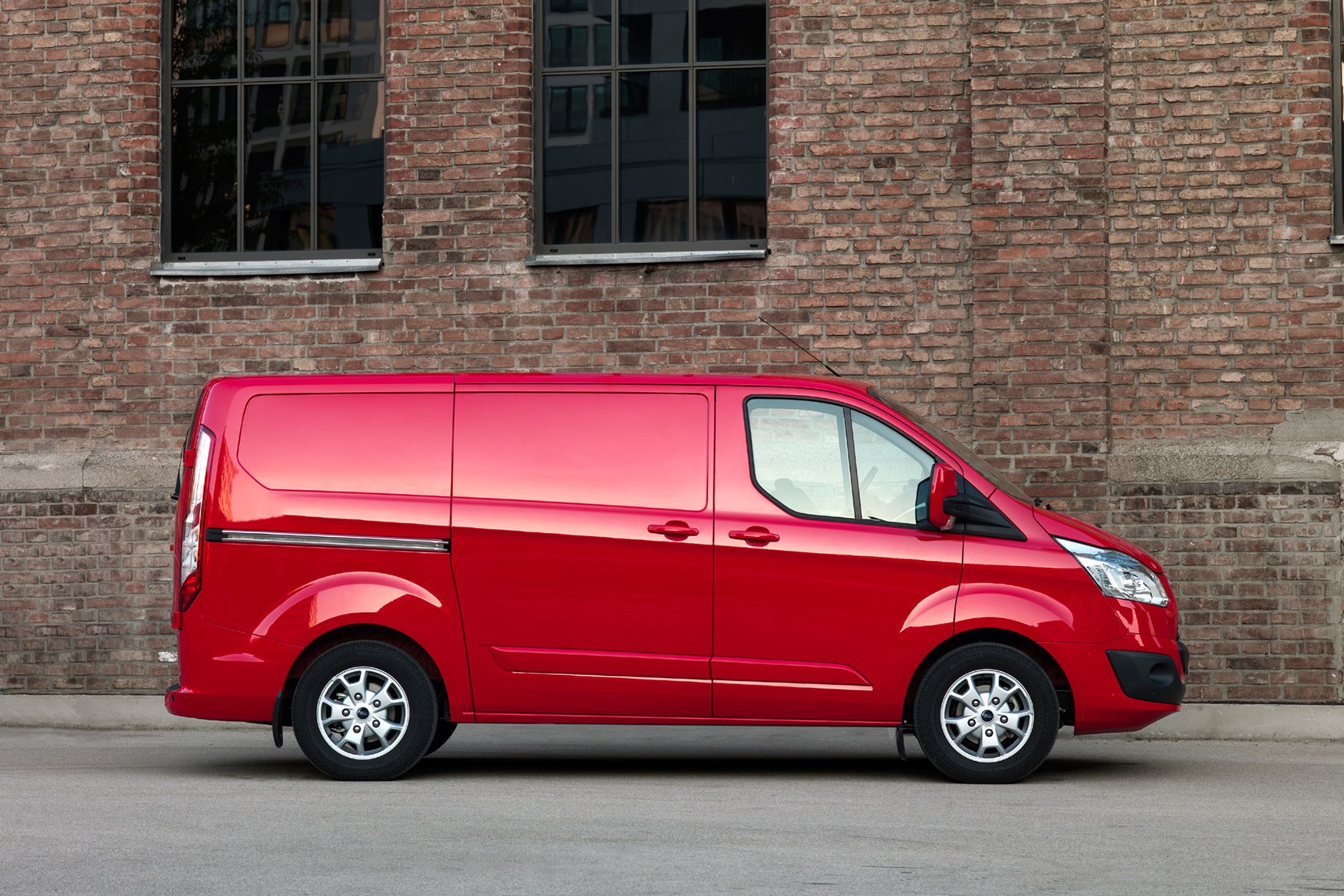 Long-wheelbase (LWB) Transit Customs are labelled L2, and have a distance of 3,300mm between the axles. This results in a van that looks (again, in pre-2018 facelift guise) like this: 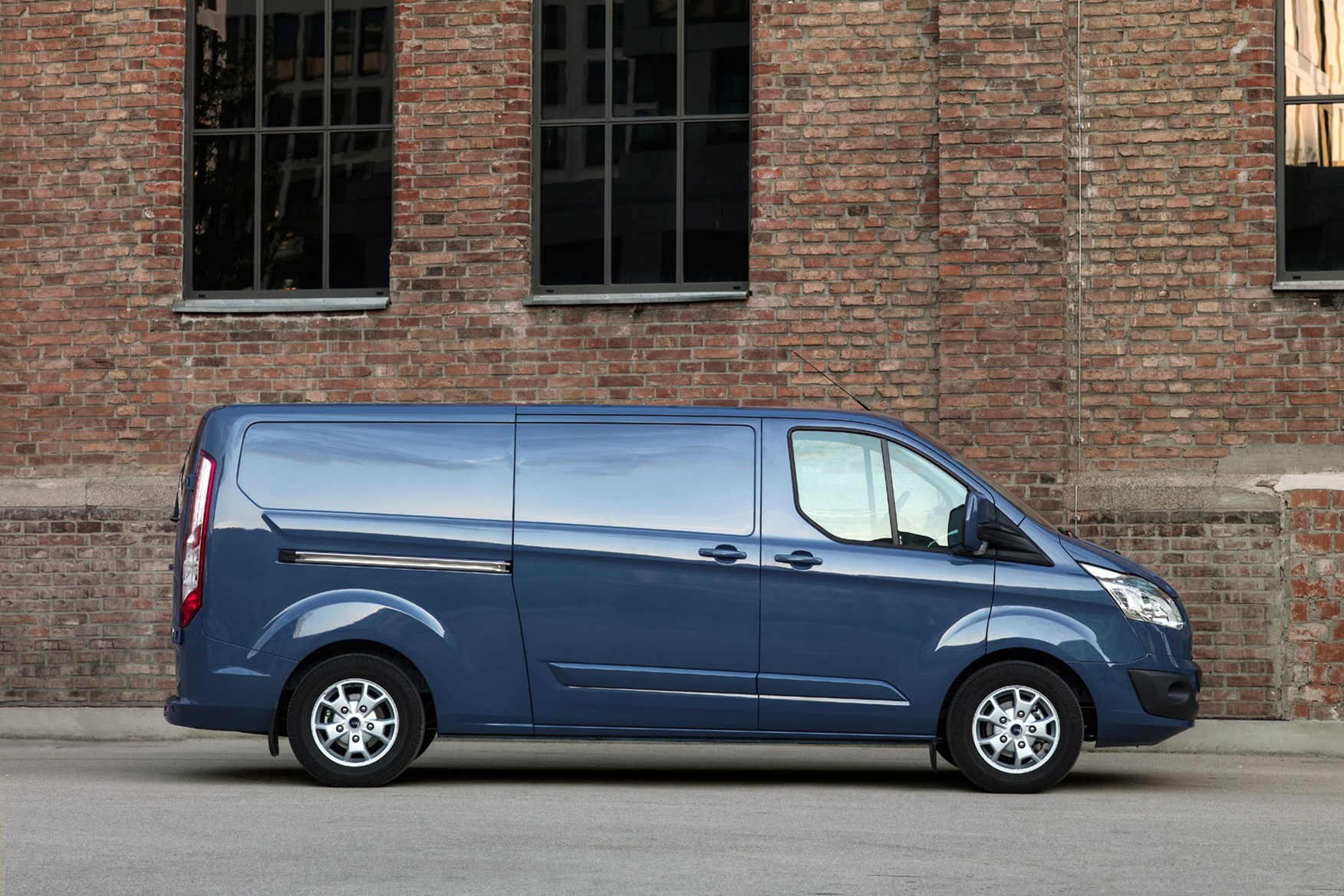 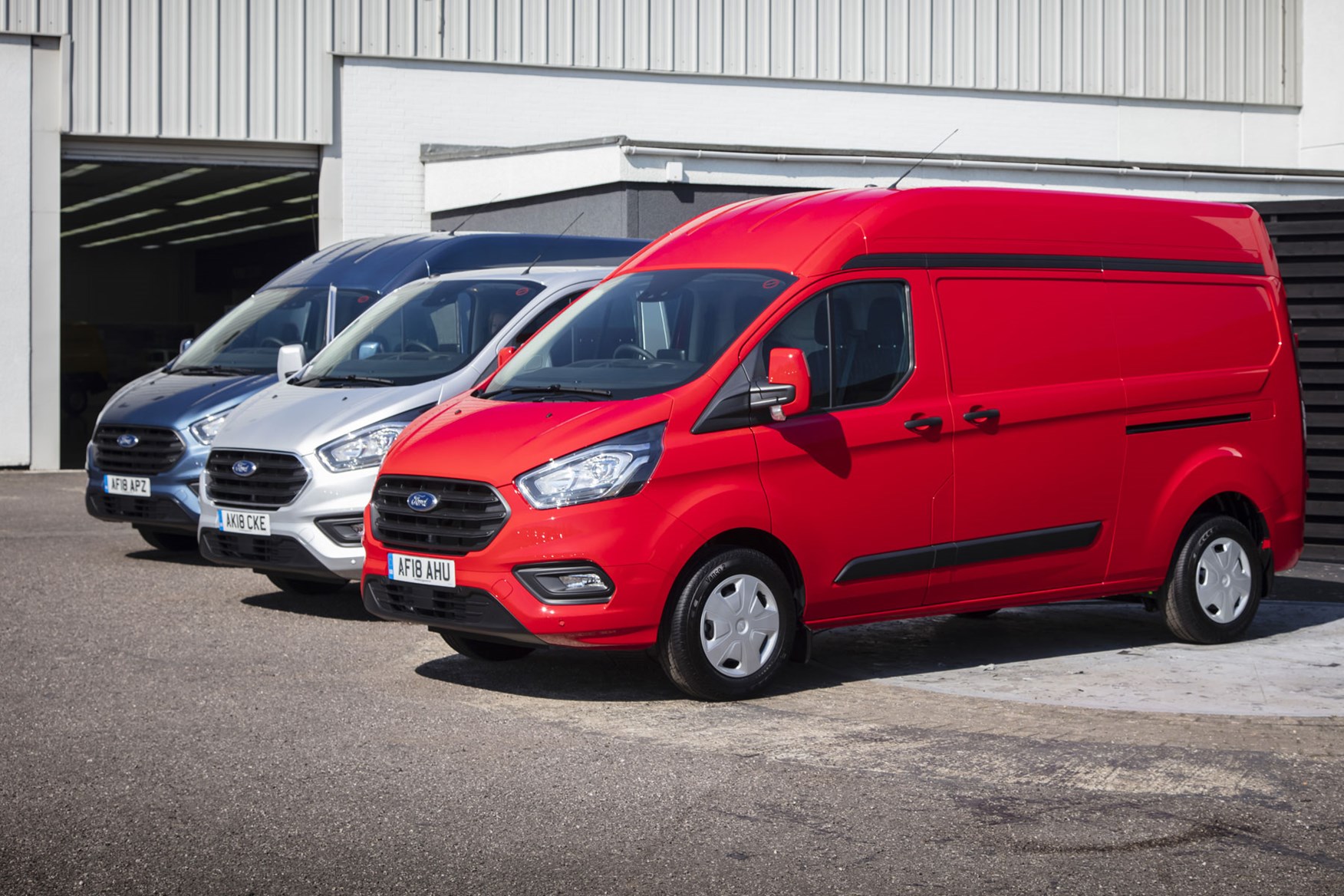 The vast majority of operators stick to the low-roof design - it's easier to get into car parks, and still offers a load volume of up to 6.8 cubic metres.

But the high-roof model unsurprisingly has a great deal more headroom in the load space, so if you regularly need to access items in the rear of the van - such as parcels for delivery - you may find the taller version more user-friendly.

For full exterior and load area dimensions, see the tables below.

All the above figures are for the 2018 facelift model, but this is the same width while the length is only 1mm greater than the 2012 original.

The exact height varies with fitted equipment and payload, hence the range of figures. Note that pre-2018 models were listed as up to 40mm taller.

The load-through bulkhead - fitted as standard - increases the maximum load length on L1 models to 3,037mm and 3,404mm on L2 models. This is only suitable for skinny items such as pipes and planks, though.

Note that the Transit Custom Plug-In Hybrid (PHEV) has the same load capacity as the standard van, as its battery pack is mounted under the floor. It is only available in the smallest L1H1 body size at present, however.

Ford sells the Transit Custom in a wide range of gross vehicle weights (GVW, what Ford also calls gross vehicle mass or GVM), so make sure you know exactly what you're buying and whether it's suitable for the amount of payload you will be carrying.

GVW is the total weight of the vehicle with everything on board including the people - exceed this, and you're breaking the law.

The higher the GVW, the highter the payload.

As a result of this, Transit Custom payload ranges from just under 700kg to nearly 1,500kg - that's 1.5 tonnes, more than many vans in the large van class above. 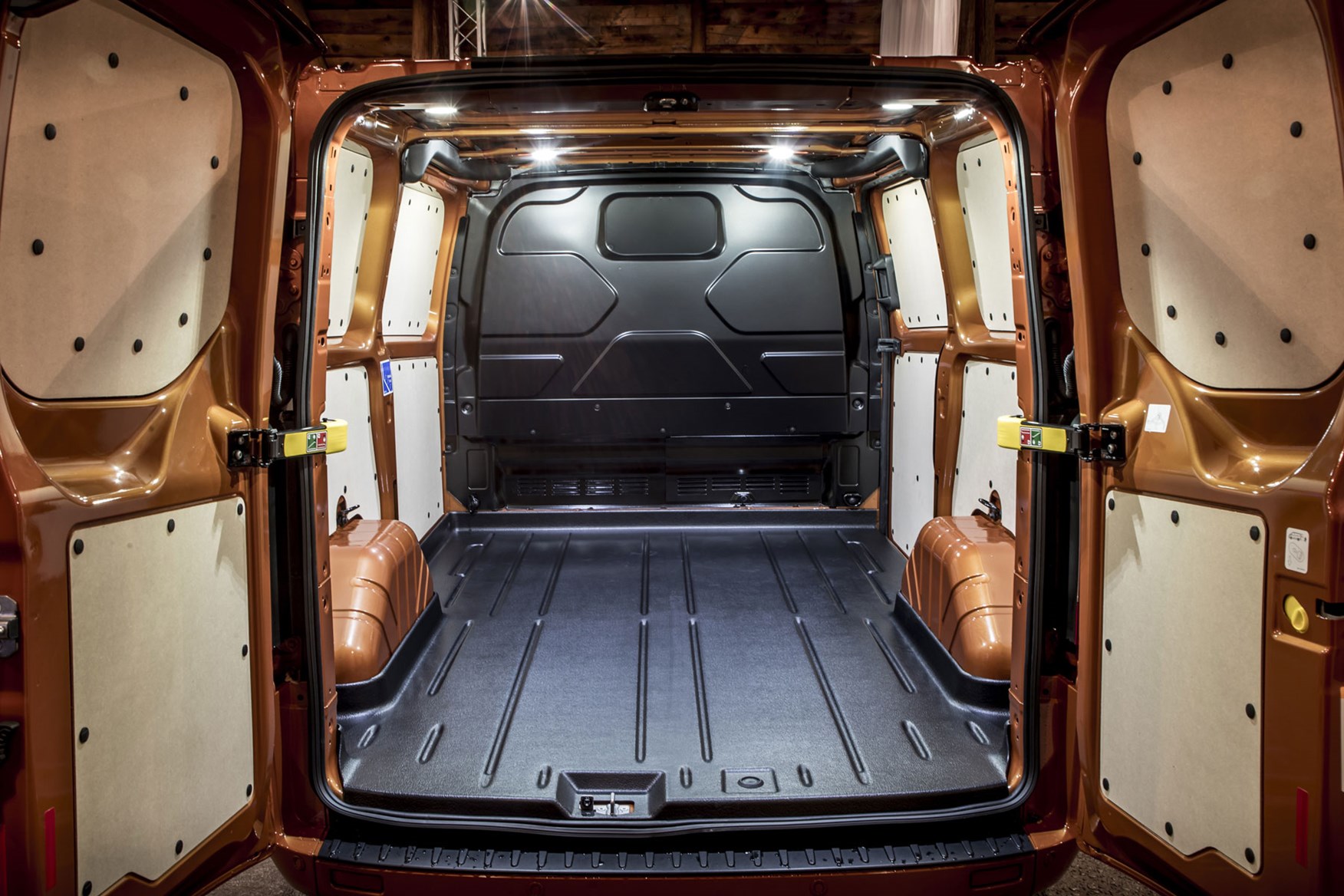 The maximum payload rating for the pre-2018 2.0-litre EcoBlue Transit Custom was 1,474kg. This has fallen slightly following the MCA facelift to 1,469kg - but the Ford is still one of the heaviest lifters in the medium van class.

On the flip side, the minimum payload rating has gone up to 695kg post-facelift, thanks to an increase in the basic gross vehicle weight from 2.5 to 2.6 tonnes (2,600kg), known as the 260 series.

What's the payload of the EcoBlue Hybrid and Plug-in Hybrid?

If you're considering one of the new EcoBlue Hybrid models, which use mild hybrid electric vehicle (mHEV) technology to save fuel, it may be worth noting that that the additional tech takes around 27kg out of the payload versus the standard version of the van it's fitted to.

We've a separate review for the Transit Custom Plug-In Hybrid, which uses a small petrol engine and an electric motor instead of a diesel engine, and you can find the latest payload info about that on our dedicated Ford Transit Custom PHEV dimensions page.

All Transit Customs will tow 750kg unbraked. How much they can tow with a braked trailer varies widely between models, up to a maximum of 2.800kg.

The long-wheelbase L2 versions are typically rated to tow more (or at least, offered in more versions that can tow up to 2,800kg), with most short-wheelbase L1 models limited to 2,500kg max.

Transit Customs fitted with the six-speed automatic gearbox have significantly reduced towing capacity - 1,100-1,950kg, depending on variant - while those fitted with optional rear air suspension aren't rated to tow at all. The PHEV similarly has no towing legal towing capacity.

Be sure to check the weight plate of the van to confirm exactly what the van you're driving is restricted to.