This car has been superseded by a newer model, click here to go to the latest Volkswagen Golf R review.

Currently your cheapest way into a used Volkswagen Golf R

While the Golf GTI remains the most famous hot hatch around, the R version has made quite a name for itself thanks to ample power, four-wheel drive traction and good value for money. However, the first R was based on the Golf Mk6, and wasn't actually on sale that long, tends to be harder to find, and when nice examples come up for sale are surprisingly expensive.

This model replaced the previous R32 from 2005 and the reason for the name-change is that it dropped the 3.2-litre V6 engine and R20 just didn't sound as good. Instead it was introduced with a more powerful version of the 2.0-litre turbocharged used in the MkV (not MkVI) Golf GTI. 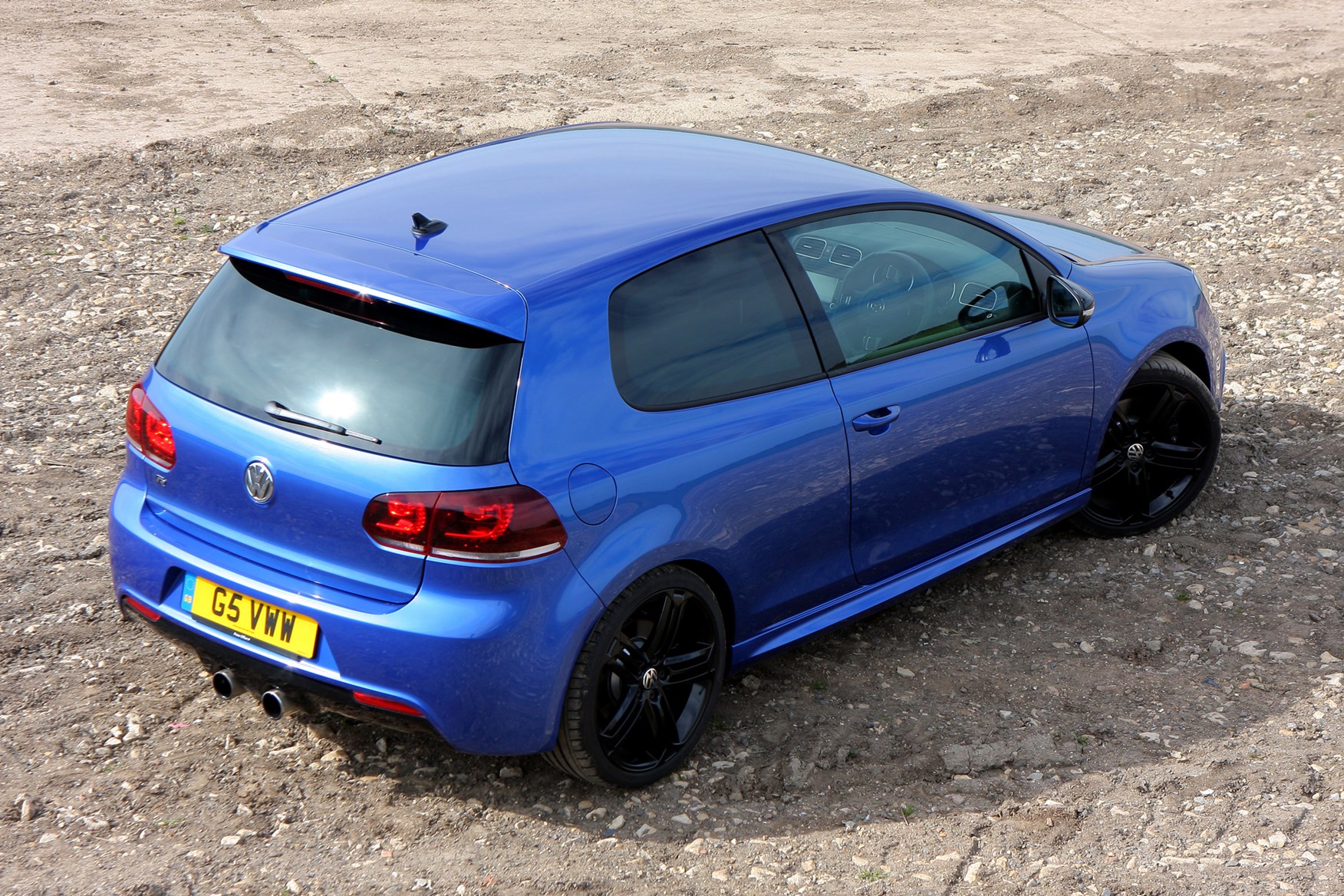 The Golf R was available new as three-door or a more practical five-door, so it's a viable option for family buyers, however unlikely it may seem. These days, the three-door is so much more desirable than the five-door, and values reflect this.

Getting in and out of the three-door can be tricky, as with all cars of this size, but the front seats do slide and the backs fold forward to make access a little easier. The boot is smaller than the standard Golf and GTI due to the R having four-wheel drive fitted, which eats into luggage space.

As a result it can carry 275 litres, which is 75 litres less than a normal Golf, while the maximum carrying capacity with the seats down is also reduced. But there's plenty of stowage elsewhere with a cooled glovebox, large door pockets, two central cupholders and a central cubby which houses the USB connection leads that are standard fit.

When it was tested by Euro NCAP, the Golf was awarded the maximum five star rating. This still applies even under the new tougher test criteria, introduced in 2009. This is one overall rating, which now covers not only adult occupant safety but also child and pedestrian safety along with a rear impact whiplash test.

The R comes with ESP stability control, seven airbags including a driver's knee airbag (the only Golf to do so), whiplash-optimised head restraints in the front and two Isofix child seat mountings. In terms of security it has an engine immobiliser and an alarm with interior protection.

The interior of the Golf R is less overtly sporting than the GTI and does without the red stitching on the gear lever and steering wheel while the tartan seat fabric is also absent. It still has a performance car feel thanks to a thick-rimmed, flat-bottomed steering wheel with gloss black inserts and supportive sports seats with alcantara trim while the needles on the dials are blue (rather than the red ones in the GTI).

It is rather understated, especially compared to the aggressive exterior styling, but there's no denying the quality with all the switches and controls working with superb precision. The optional touchscreen sat-nav system is impressive too. It's easy to use and features a 30GB hard drive that allows you to store music from CDs onto it. It can also play DVDs when the car is stationary. Few extreme hot hatches such as this are particularly comfortable and the Golf R is no exception. The lowered and stiffer suspension is good for cornering but it does mean an often uncomfortable ride over uneven or bumpy roads where the R tends to fidget and bounce. It's much happier on motorway-type surfaces where it's as quiet and smooth as a normal Golf.

The engine still delivers a sporty note along with the central twin exhaust pipes, which is enjoyable but not intrusive. Like the standard Golf, there's plenty of interior space for four passengers and the sports seats offer great side support but aren't too narrow or firm, making them ideal for enthusiastic cornering and for long journeys.

Optional Recaro bucket seats are available finished in leather and black alcantara while all models come with climate control as standard. 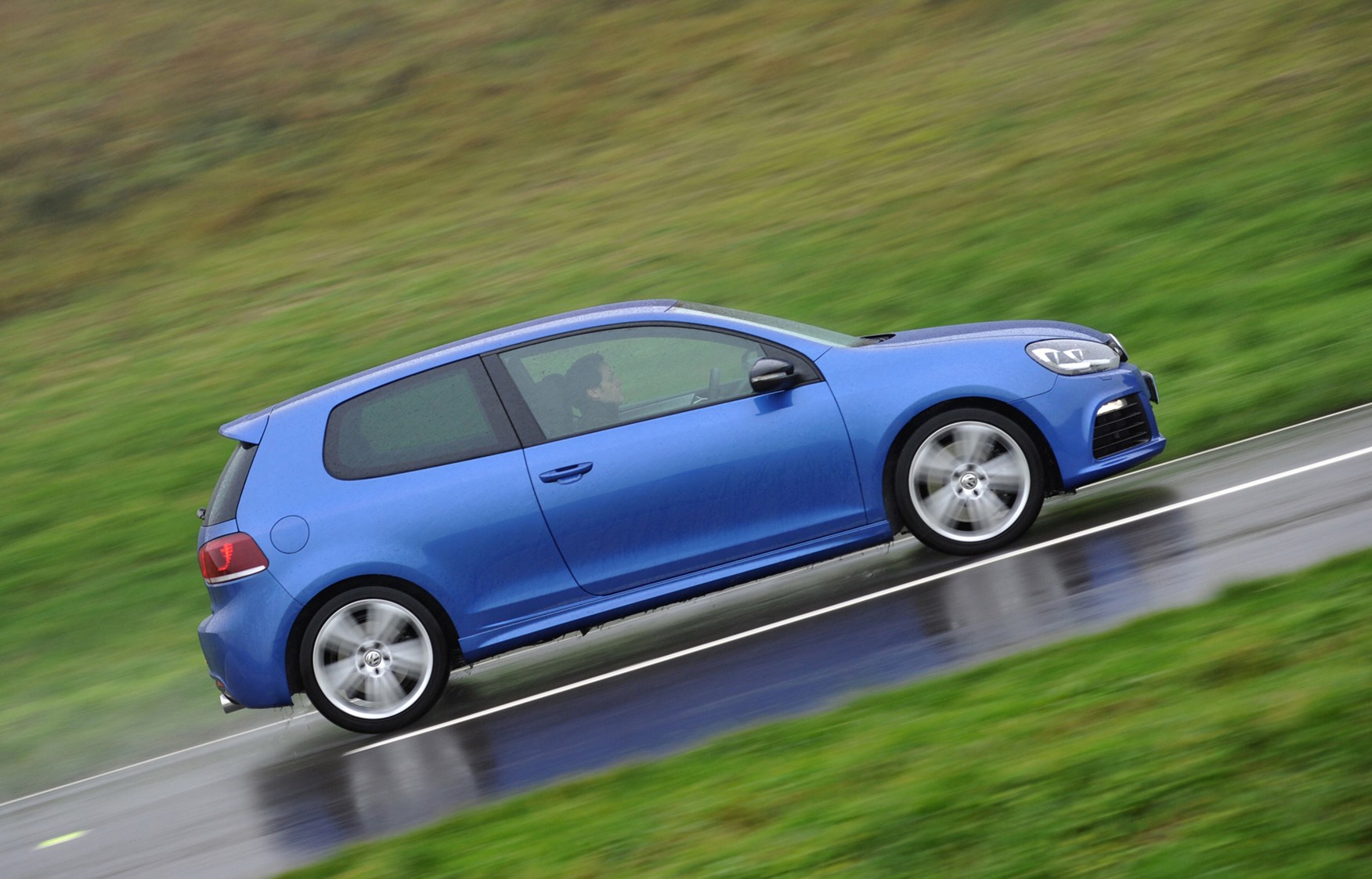 Despite its extra performance, the Golf R has the same servicing schedule as the rest of the Golf range. The on-board computer lets you know when a service is due but it can typically be between 10,000 miles and 18,000 miles or two years, just remember to get the cambelt changed every 60,000 miles and the Haldex four-wheel drive system needs servicing every 20,000 miles.

Servicing at Volkswagen dealers is reasonably priced, but can seem expensive compared with independent specialists who really know their way around these cars. Insurance is group 36 while reasonable emissions mean it avoids the most expensive car tax bands, unlike the old R32.

The claimed average economy figure is 33mpg, but enthusiastic driving (which is quite likely in the R) will see this rapidly drop. Considering it boasts 275hp and a 0-62mph time of less than 6.0 seconds, the R is reasonable in terms of emissions and economy. It can average 33mpg while the DSG models are even better at 34mpg. CO2 emissions are 199g/km of CO2. As for reliability, they're not bad considering they're getting on now, but we'd want to see evidence of full and regular services by a specialist, and it's probably better to stick to a manual car as opposed to the DSG automatic. Having said that, if the clutch isn't good on a manual car, replacement is more than £1,000 thanks to the need for a new dual-mass flywheel at the same time.

The first Volkswagen Golf R boasted an impressive 275hp (compared with 200 for the contemporary GTI), which resulted in a 0-62mph time of 5.7 seconds - more than a second quicker than the GTI. Opting for the DSG drops this even further to 5.5 seconds.

It's still a very nice engine to push hard and although it may not quite have the same muscular character of the previous V6, the central twin exhausts have been tuned to deliver a deep note, which makes it feel different to the GTI. There's seemingly endless acceleration available right up to the red line, while the responsive throttle pedal and snappy, short gearshift all add to the racy feel. On country lanes it's in its element, but impressively, the engine is still very refined and will happily cruise along at motorway speeds in a relaxed manner. The immense amounts of in-gear pace mean overtaking is easy and you rarely have to change down a gear. The six-speed DSG, complete with steering-wheel paddleshifts, was an optional extra, and if you're buying today the manual car is the more satisfying in daily use.

Thanks to the standard 4Motion four-wheel-drive system, the R is secure and despite all that power on tap, pulls away cleanly without losing traction, even in very wet conditions – useful when exiting slow bends. As a result the Golf always feels composed, but even with the extra weight of the system, it's still nimble on twisting routes and a real delight when tackling corners.

The R has a unique suspension set-up and sits lower than other Golfs. This ensures excellent body control while the steering is perfectly weighted and has plenty of feel about it, adding to the feeling of confidence when driving quickly. An optional system called Adaptive Chassis Control (or ACC for short) is available, which allows you to adjust the suspension between comfort or sport settings. 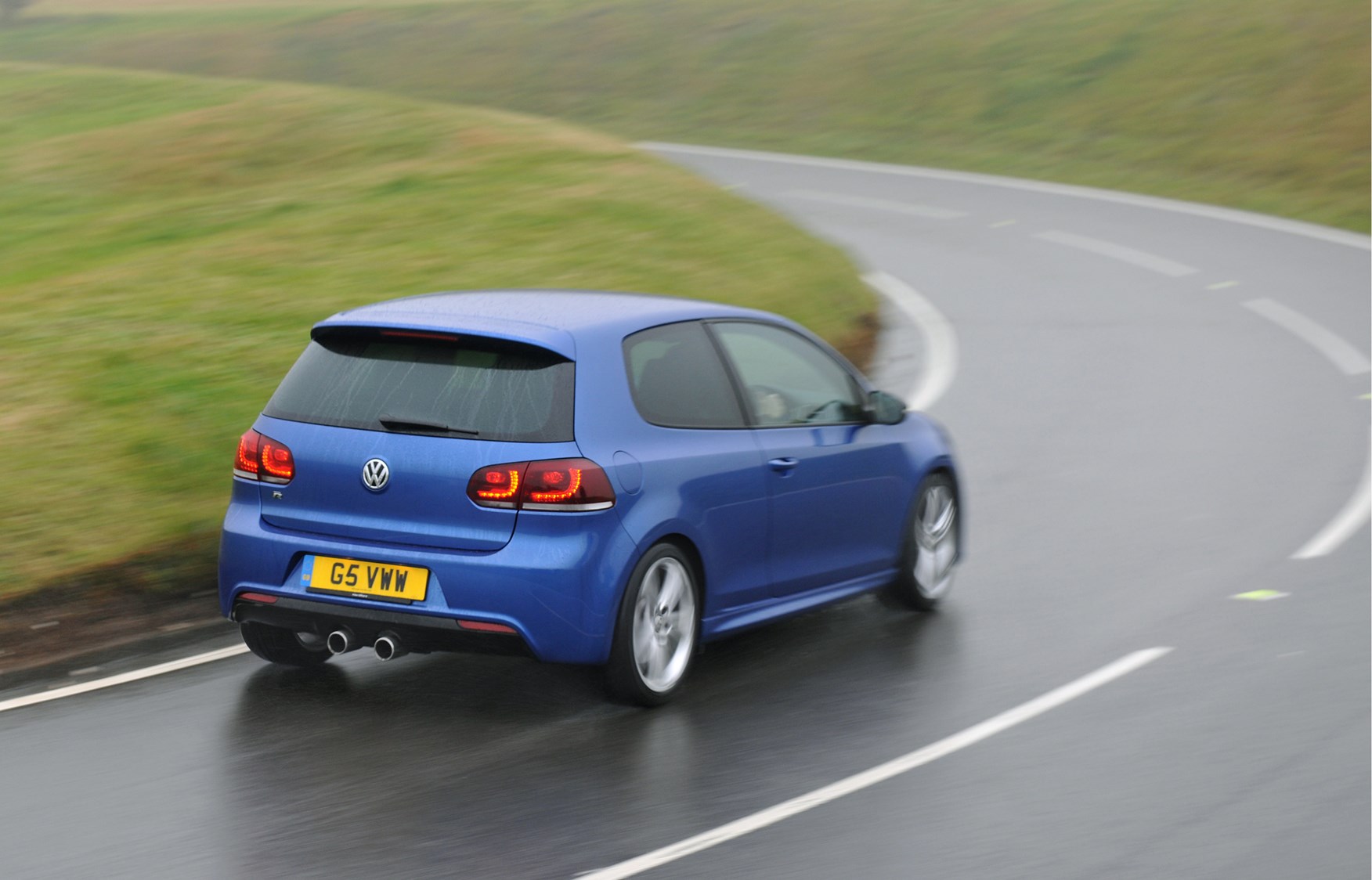