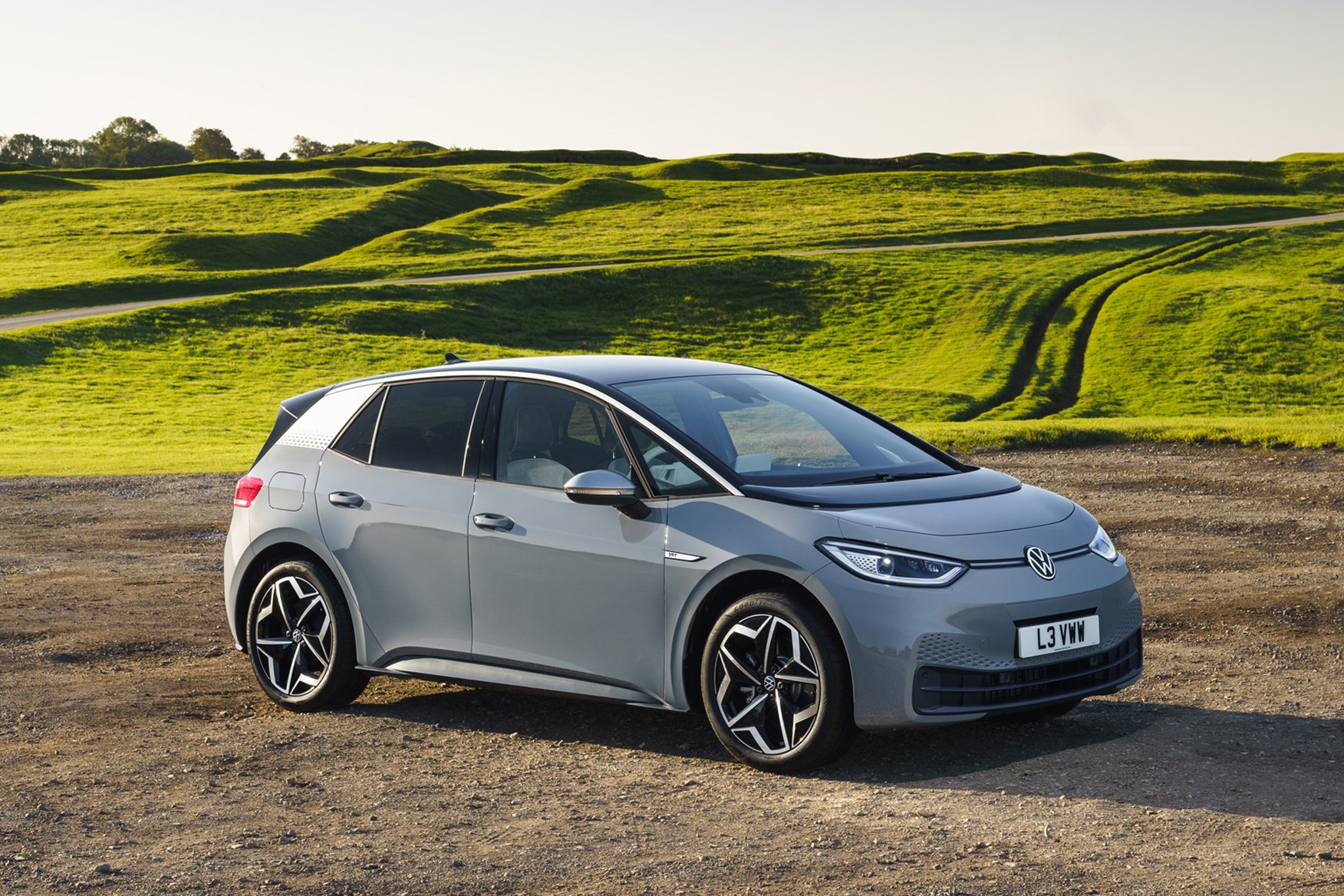 How much space is there?

For a car that’s roughly the same size as a VW Golf or Ford Focus, the ID.3 has a relatively large passenger space, helped by short front and rear overhangs, a lengthy wheelbase (the distance between the front and rear wheels) and a windscreen that’s much closer to the front of the car than in a conventional petrol or diesel rival.

Strangely, it gives you the impression of being narrower inside than the equivalent Golf, despite actually being (slightly) wider on the outside. Three large adults will fit across the rear seat, and while the one in the middle won’t want to be there for long, all of them will have plenty of knee and legroom. Note that the Tour model, pictured below, is a strict four-seater with a small cubby in the centre.

Handily the ID.3 has a totally flat floor inside. The footwells front and rear are a little higher than you’ll find in a more ordinary family car, because the battery pack is located beneath your feet, but the slightly raised roof means there is still plenty of headroom.

A family with even older teenagers should be able to get comfortable here.

At 385 litres before you fold down the seats, the boot is five litres bigger than that of the contemporary Golf. It’s also a nice deep, squared-off shape, so should easily accommodate suitcases.

This isn’t without its disappointments, though. For starters, as a purpose-built electric car, it’s a shame Volkswagen hasn’t thought about a front boot where you might store the charging cable – although the can be squeezed under the boot floor to prevent cluttering up the load space.

Additionally, the lip of the boot is also rather high, so you’ll have to lift heavy items up and over it. And, if you ever need to carry larger items you may be disappointed to find that you can only fold the rear seat backrests down over the rear seat bases – so the space revealed is far from flat, although this isn't uncommon in hatchbacks of this size.

Total load capacity with the seats folded is 1,267 litres, however, which is again larger than the latest Golf, this time by 30 litres.

The Volkswagen ID.3 is a compact family car, meaning there aren't too many issues fitting into the all but the tightest of spaces. Rear three-quarter visibility over your shoulder is poor thanks to the thick pillars, and your view of the front corners of the car is non-existent.

But it has an exceptionally-tight turning circle, the mirrors are good, and there are options to add front and rear parking sensors, a rear-view camera or fully automatic parking systems. With these driver aids in place, parking an ID.3 should pose no problems.

Safety body Euro NCAP has awarded the Volkswagen ID.3 a five-star crash-test rating. And with good reason – it comes packed with innovative features include a central airbag – intended to stop the driver and front passenger colliding with each other in the event of a side impact – and an optional Travel Assist system which can control the steering, acceleration and braking for short periods, at any speed (where system conditions are met).

Combined with the equally optional Eco Assistance, this can even help you travel further per charge by actively reducing the car’s speed on approach to changes in the limit and the road ahead. As with other active safety technology, this won’t appeal to every driver, but might make your life easier.

Other safety items available include Front Assist, which takes care of autonomous emergency braking as well as warning you of hazards ahead, and Side Assist, which is VW’s name for blindspot monitoring.

The active Lane Assist not only warns you if you’re about to leave your lane without indicating, it will tell you to reposition the car in the middle of the lane if it thinks you’re drifting and take care of the steering altogether for short periods, as long as it’s able to detect white lines on either side.

Like many other recent Volkswagen Group products, we did find the ID.3 occasionally asking us to take control of the steering even though we were, in fact, holding the wheel. It seems that when you’re travelling in a straight line, the system does sometimes get a bit over-cautious.

The basic equipment list includes equipment that is standard across all versions of the Volkswagen ID.3 Hatchback.

Find out more about all electric cars here

The Volkswagen ID.3 Hatchback was tested by Euro NCAP in 2020 and was awarded a 5 star overall rating. This overall rating is calculated from the following individual ratings: