Volkswagen reboots its Cabriolet heritage... with a soft-top SUV 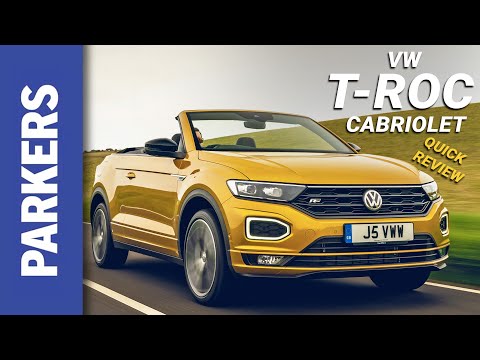 It’s no secret that we Brits buy more convertibles per head than perhaps our dodgy weather patterns merit. But not everybody wants a two-seat soft-top with a rorty engine, tiny boot and low-slung driving position. What if they simply want an ordinary, practical car with a folding roof?

That’s where the Volkswagen T-Roc Cabriolet comes in. VW claims it’s the world’s first crossover SUV convertible (it’s not – the Range Rover Evoque Convertible came first, and many years before that, so did the Nissan Murano CrossCabriolet) but in holding this classification, it retains many aspects of the SUV on which it’s based.

That means that, unlike with a Mazda MX-5 or BMW Z4, you don’t have to lower yourself into the seats – you simply step in. It means that the boot, though smaller than before, is still large enough for a family’s weekly shop or weekend luggage for two. And it means that even in its most potent form, driving the T-Roc Cabriolet is never anything but effortless.

Sure, it won’t appeal to driving enthusiasts, and the concept of a convertible SUV is still pretty abhorrent to some. But we don’t think it should be – in fact, we reckon the T-Roc Cabriolet is well worth a look for anybody who’s in the market for an open-topped car that’s still usable every day.

Not too much competition

Back in the 2000s, you couldn’t move for practical, four-seater convertibles, but nowadays pickings are rather more slim. In fact, most of the T-Roc Cabrio’s competition comes from premium manufacturers, in the form of cars such as the Mercedes-Benz C-Class Cabriolet or BMW 2-Series Convertible. These are a fair chunk more expensive than the T-Roc.

Its in-house rival is the Audi A3 Cabriolet – now on run-out – while on a smaller scale, the popular MINI Convertible presents a worthy rival, although its rear seats are more of a token gesture than usable pews.

Savvy competitor brands will doubtless be watching with interest, with feasibility studies ongoing to determine how easily their SUVs could be turned into convertibles. It wouldn’t be a surprise to see at least one of the Volkswagen Group’s other brands offered something similar in the near future, such as a soft-top Audi Q2.

The transition to a cabriolet may bring the promise of a million miles of clear headroom, but some loss of practicality is inevitable. Still, the T-Roc Cabriolet may be less family-friendly than its SUV variant, but in convertible terms, it’s practically an MPV.

There are only four seats, but set the front ones for adults and there’s the possibility of squeezing two in the back without having to resort to amputation. Access is even pretty good – naturally, it’s easier with the roof down, but with the roof up large side doors and front seats that slide right out of the way mean it’s not too hard to enter or exit.

Boot access is obviously inferior, with a stubby boot lid and reduced space. But because the roof itself is a simple folding fabric affair, it doesn’t affect storage when it’s down – you still get the same supermini-sized 248-litres of boot space. Certainly, in comparison to something like the bijou Mini Convertible it’s far and away the more usable boot.

Not great to drive – but not bad, either

The T-Roc Cabriolet can be specified with either a 1.0-litre, three-cylinder engine or a more powerful 1.5-litre four-cylinder. However, even the standard T-Roc isn’t a lightweight car, and the transition to Cabriolet has added around 200kg of rigorous strengthening and stiffening measures. For this reason, it’s the more powerful of the two engines you’ll want – the entry-level model really is too slow.

Stick within the T-Roc Cabrio’s limits and you’ll find it a pleasant enough cruiser. Keen drivers may bemoan the slight lack of body stiffness and total absence of dynamism – but really, that’s not the point, is it?

Instead, the T-Roc Cabriolet is at its best being driven like any normal car, where you can enjoy an entire sky’s worth of open air from a comfortable seat. And comfortable it is, too – especially the figure-hugging sports seats of R-Line models.

Click through the next few pages to read everything you need to know about the Volkswagen T-Roc Cabriolet including its practicality, how much it costs to run, what it's like to drive – and whether we recommend buying one.